Posted by Eddie Pasa on October 6, 2019 in Movie Reviews / No Comments

As we grow older, we find more and more that consumer products – especially music and film – aren’t marketed or made for us. Your chances of finding youth-oriented comedies in theaters are much greater than finding something made for those of us who’ve already been through the awkward transition between the teenage years and early adulthood. Judd Apatow’s This Is 40 was the last film which made me sympathize so much with its lead characters as they navigate life with jobs which pull at them and children who, by nature, both demand and deserve attention. 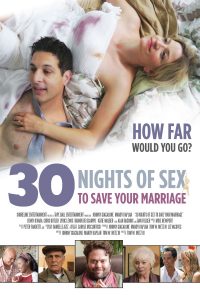 What the ultra-low budget, Indiegogo-financed comedy 30 Nights of Sex to Save Your Marriage (hereafter referred to as its original title, 30 Nights) gets so right is its portrayal of the modern middle-class couple in today’s sink-or-swim life. All too often, we’re plied with stories about people for whom money or time is no issue; 30 Nights goes straight to the heart of this with its couple who barely have time for each other, let alone their young son. Also, it’s not just time they’re fighting – they’re battling the insecurities which prey on us every minute of every day which make us believe that we’re not as “good enough” as we used to be.

Adapted from a short film also written by and starring Johnny Giacalone and Mandy Kaplan (director Tom Metz III also gets screenplay credit), 30 Nights may start with the familiar, simple premise of a flagging couple turning to extremes to get out of their relationship rut. But it’s done so with very real-world, identifiable trappings which are then pushed to their funniest and most hysterical heights as each scene tries to one-up the one before it. Thanks to near-constant punchy dialogue and outrageous physical comedy, the laughs don’t stop coming, even through the closing credits (stick around for a quick epilogue). 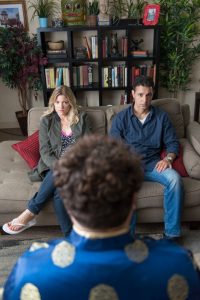 30 Nights is powered by our two charming and deftly hilarious leads, first seen in the film’s cold open as the ultimate newlyweds, unafraid to do for each other and with a world of possibilities ahead. After quickly establishing the lengths to which one will go for the other, the opening credits slam us through to their marriage seven years later, where sex has to be scheduled around work and caring for their only son Spencer (Duncan Joiner). Even with time carved out for this intimacy, both Nick (Giacalone) and Willa (Kaplan) are terrified of the prospect, resorting to medical endangerment to get out of it.

This crazed introduction to their current life sets up both their characters and the kind of laughs we’re to expect, and the film doesn’t fail any of them. It gets even more side-splittingly hilarious when, on a friend’s hearty recommendation, they attend counseling with the enigmatic Dr. Lance Ying (Dan Fogler), whose book “Save Your Marriage in 30 Nights” provides the film’s narrative thrust (pun definitely intended). For 30 nights straight, they’re to complete a sexual task of some kind, from the vanilla to some more out-there suggestions, forcing Nick and Willa to shed every ounce of dignity and insecurity to get to the light. 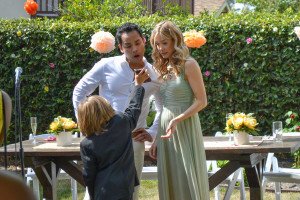 30 Nights has the lock on its no-holes-barred (yes, that was intentional) physical comedy, putting Nick and Willa into all manners of situations including costumes, basic female physiology (they’re supposed to have sex one night a month – oh, yeah, they go there), and an uproariously funny “special delivery” scene. But it also balances these scenes with the mental roadblocks and doubts which plague us and stop us from seeing our true value to ourselves and one another, which is where the film’s sweetness kicks in. It’s not all sex all the time with Nick and Willa; there are problems they must overcome if they’re going to continue as a couple and as parents, and we find ourselves rooting for them to see it through to the very end.

Johnny Giacalone and Mandy Kaplan provide a wonderful backbone to the film with layered, nuanced performances and a willingness to breathe authentic, harried life into Nick and Willa. Their shifts from pratfalls and boner jokes to more soulful, troubled passages are believable and thorough, aided by a script which doesn’t hem them into being simply one-note caricatures. They’re supported by a terrific, recognizable cast of character actors; Chris Butler (“The Good Wife”), Lyric Lewis (“A.P. Bio”), and Jenny O’Hara (a perennial favorite of mine since “V: The Final Battle”) are among those who’ve come to play. Also in the mix is Dan Fogler (of the Fantastic Beasts and Where to Find Them films), who nearly steals the film as a therapist whose nebulous techniques and styles may or may not be full of crap; he may only be trying to push his book, but we get the feeling he’s genuinely invested in the best possible outcomes for his patients. 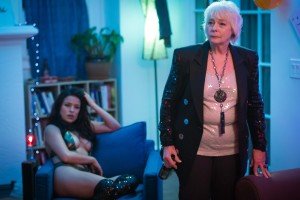 The film is just as much of a whirlwind as our daily lives are. Being a part of our fast-paced society doesn’t give us time to sit down and truly figure out what’s going on with ourselves before we become a stranger on the other side of the bed from our mates. Thankfully, the film doesn’t turn into a fantasy where troubles are magically turned around by this sudden intervention; it comes from a deeper, more human place, using humor and doubt as the tools with which Nick and Willa try to forge their second lease on their marriage. The sex is just a metaphor for diving deep into each other, bringing out and laying bare the normal, weird, and secretive things we’ve buried in favor of keeping the status quo. The rest of 30 Nights of Sex to Save Your Marriage is a gutsy look at two people breaking out of treading water, swimming confidently and together after forgetting how to do it, and leading each other back to true love.