Posted by Eddie Pasa on September 17, 2019 in Movie Reviews / No Comments

Most horror movies take long, circuitous routes setting up their characters so we can get to know them right before they’re brutally taken away from us. Almost all teen slasher films are guilty of this, from Halloween to Friday the 13th to latter-day classics like Saw (just the first one) and Scream. (Well, maybe not that last one, as the story was just as compelling as the action.) However, just in time for trick-or-treat season, Haunt eschews the agonizing set-‘em-up-and-knock-‘em-down procedure, whips out the knives, and goes straight for the jugular. 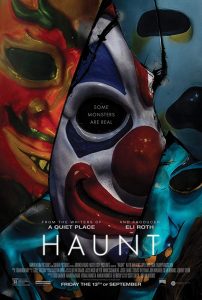 And why wouldn’t they? There’s only one character who needs any exposition, and that’s Harper (Katie Stevens), first introduced as she’s avoiding her boyfriend Sam’s (Samuel Hunt) texts and covering a black eye with concealer. The other characters we meet later in the film – even possible love interest Nathan (Will Brittain) and friendly housemate Bailey (Lauryn McClain) – are the support structures for Harper’s evolution throughout Haunt. Not even the killers, whose character names in the credits only reflect their disguises, are given any due.

No, writers/directors Scott Beck and Bryan Woods – co-scripters of the terrific A Quiet Place – are more intent on packing their film with the most entertainment value possible. They quickly bypass the usual sit-around-and-gab and replace it with getting there, showing us what we need in the space of a nighttime car ride to an “Extreme Haunted House.” Once our sitting ducks characters have reached their destination, all bets are off. It’s a lean nail-biter which absolves you from the need to know everything about everyone by simply narrowing its focus to only that which propels the plot forward.

To call Haunt a “scary movie” is not entirely accurate; it’s a total menace, almost becoming a villain itself.  It starts right from the first scene, where a  pumpkin is smashed against Harper’s front door and Harper’s putting on her makeup. Our hackles are raised and not one moment of rest is granted, even when Harper’s out with Bailey, Angela (Shazi Raja), and Mallory (Schuyler Helford) at a bar. An uneasy meet-cute – which, in retrospect, isn’t really all that cute – between Nathan and Harper also gives off a not-quite-with-it energy which gets further amped up by the introduction of the boorish Evan (Andrew Caldwell), an overly standoffish dudebro who’s not happy unless he’s the center of attention.

Nothing is comfortable in this film, not even in the way the final frame leaves us. It’s a big credit to Beck and Woods that they didn’t make anything pat or just-so about Haunt; it is a truly off-putting film, but not pejoratively. Layer upon threatening layer of dread is heaped upon us even before the first onscreen kill due to Beck and Woods exercising restraint and tact, pulling back from rote surprises and making us feel the approaching doom. When the sixsome enter the haunted house and witness the first act of violence, we don’t quite know what kind of ride we’re strapped to, but it becomes all too obvious that this house was built for one-sided enjoyment.

Katie Stevens is solid, marring Harper with the blitheness of youth and the sadness of personal hell. She hardily emotes this baggage and pushes Harper well into terror once the chainsaws fire up and the hot pokers start going into human flesh. As her companion, Will Brittain once again steps into the role of college baseball player – similar to his role as Billy “Beuter” Autrey in Everybody Wants Some!! – and wisely steers Nathan away from being typical dumb-guy fodder, giving him a brain and wits to help him navigate this house of horrors. They’re a good pair to watch, anchoring this film surprisingly well with feeling and guts.

Some may decry the film for not showing any care for its characters by not setting them up. On the contrary, Beck and Woods write just enough for each character to make their presence known before the hammer comes down (sometimes literally). That we can care about these kids during their short time onscreen is quite something; it’s not like they were simply put in front of a wrecking ball and made to stand still. No, these characters have lives and meaning, but kept real without having to shoot off reams of dialogue designed to make you feel better about watching them meet their fates. For its brevity and the amount of story Beck and Woods are able to tell in the time allotted, Haunt is a surprise Halloween treat. It doesn’t overstay its welcome, but it doesn’t leave you feeling like you’ve been tricked.