Annabelle Comes Home is a smashing scarefest reliant on a heavy mood established by enthralling performances, brooding cinematography, and Joseph Bishara’s dread-filled score. Looking for dramatic horror à la Ari Aster’s Hereditary or Jordan Peele’s Us? Go somewhere else. Writer/director Gary Dauberman has wrought a simple, yet thoroughly enjoyable bottle episode in The Conjuring universe, akin to walking into a beachside or carnival haunted house with employees who run at you screaming in ghastly costumes. 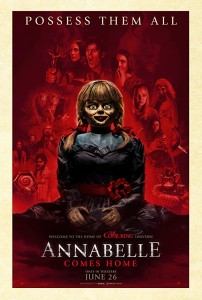 If that’s your thing, then Annabelle Comes Home is the film for you. Make no mistake; Annabelle: Creation still stands as the best of the Annabelle stories, with this installment coming in second. The Dauberman-scripted Annabelle is still sitting at the bottom, but it’s interesting to see the evolution and manner in which this spinoff series operates. The first film expanded on the titular doll’s mythology; the second defined the doll’s origins; and now, we get to see what happens when Ed and Lorraine Warren (Patrick Wilson and Vera Farmiga) take Annabelle into their custody.

It was the first thing we ever saw in the Conjuring universe way back in 2013, remember? Seven films in six years makes the distance between the start of the franchise and the current day impossibly long. It seems like forever and a day ago that the lights were going down in a theater only to cut from the opening logos straight to Annabelle’s scarred and cracked face glaring at us. The Warrens sit as two nursing students and their friend frantically describe the odd and frightful goings-on in their apartment – small movements leading to a larger menace from a doll which isn’t supposed to move at all.

The whole point of Annabelle was that it wasn’t specifically her making these overtures; she’s merely a conduit for a demonic entity aiming for bodily possession and destruction. Oh, yeah, she’s creepy as hell to look at, but very few times do we see her moving on her own or having anything to do with the chaos surrounding her. And in the Conjuring universe’s eternal battle between good and evil, the Warrens decide that Annabelle is best kept away from the public and housed in their “museum” – a locked and blessed-on-a-monthly-basis room in the Warrens’ home full of evil artifacts seized from other victims.

In The Conjuring, the Warrens’ next appearance after the opening scene takes place sometime later; it’s implied some heavy stuff has happened to them in the interim. During an interview with a journalist, the Annabelle doll is seen in the Warrens’ museum, entombed in a glass case with a starkly-written edict: “WARNING. POSITIVELY DO NOT OPEN.” If you can dig it, Annabelle Comes Home enters and exits the Conjuring timeline right around here, where we’re shown the foreboding circumstances of her placement into the Warrens’ home. More spookiness via sound and set design are heaved at us, this time in broad daylight as the Warrens and Father Gordon (Steve Coulter) have to hastily plan extra security measures to keep the evil surrounding Annabelle trapped.

Of course, what possible fun could we have with this movie if Annabelle stayed in her consecrated case (made out of “chapel glass”)? In order to get there, we have to go through a whole lot of stupid, which largely concerns teenager Daniela (Katie Sarife) whose storyline attempts to drive the film’s plot. She’s introduced via the Warrens’ preteen daughter Judy (Mckenna Grace, replacing Sterling Jerins from the first two Conjuring films), who’s got some problems of her own at school. The aforementioned journalist has published his article, and Judy’s whole school starts treating her like Carrie White – shunning and bullying her, with only the timely intervention of Judy’s friend and babysitter Mary Ellen (Madison Iseman) halting any further harm.

To top it all off, it’s Judy’s birthday and everyone’s withdrawing their RSVPs to her party, citing the article as the reason. But Mary Ellen, who’s been asked to stay with Judy while Ed and Lorraine go off on another case, is about to make up for it with a night full of pizza and cake to cheer Judy up. What she didn’t plan on is Daniela inviting herself along; under the guise of friendship, she only wants to gain access to the storied artifacts the article showcases. Following her own agenda, she succeeds in unlocking the museum door and proceeds to touch everything signs say not to touch.

This is where the “whole lot of stupid” gets slammed down like the final tile in a domino game. You’re literally shouting “DON’T DO THAT!” while the rules are broken, and you just know consequences are about to bite that character in the ass. In slasher films like Friday the 13th Part 2 and others of its ilk, you can’t help but watch the strapping and nubile teenagers flout authority and rile up the villain of the piece. Dauberman has taken this approach with Annabelle Comes Home, which is part of a franchise I cited as having a distinct lack of dumbness like this, and… well… at least it gets the ball rolling. But oy, the headache which comes with watching Daniela lay her hands on EVERYTHING is atrociously painful.

It’s all in the name of turning a simple babysitting assignment into a night full of terror, which is where Dauberman gets to flex the muscles he’s been waiting to use as a first-time director. Shadows, empty corridors, false rooms, and even a Feeley Meeley board game (remember those?!) are the springboards for frights galore, with the trio of Judy, Daniela, and Mary Ellen – soon joined by local hunk Bob (Michael Cimino), whose romantic gestures are waylaid to terrific comic effect – fighting to survive the night. Yup, the Annabelle series has gone full-on teen horror movie, a curious mixing of the seriousness and stakes we’ve come to adore about the Conjuring series with the kind of antics you’d find in an ‘80s babysitter flick.

Lest you wonder, Annabelle Comes Home is a lot of fun, especially if you buy into the scares and the tension. Michael Burgess’ cinematography and lighting work wonders, leaving you on edge and waiting for another apparition to start its assault on the characters and the audience. His lingering style involves us, whether it’s hoping to make out a blue-eyed shape in the darkness or following a figure walking outside the house, visible only through windows and inexplicably entering a hallway without opening a door. Thankfully, editor Kirk Morri doesn’t overcut these sequences, allowing us extra time to bring our hands to our faces in a vain effort to shield ourselves from whatever’s hiding and waiting to jump out at us in the basement or in Ed’s office.

The adult Warrens aren’t involved much here; this is solely Judy’s movie, as she deals with her parents’ reputation and her own inherent psychic tendencies, the latter of which gets dropped by the second half of the film. Mckenna Grace delivers a truthful performance as a preteen with one foot in this world and the other a little unwillingly in the other, helping to form an attachment to the audience while the others play ghost-fodder. There’s nothing wrong with the other actors, as they dutifully and unabashedly give their all for this movie, but there’s a solemnity and respect Grace gives to Judy which is only matched by Katie Sarife.

Sarife’s Daniela is saddled with the gravest of emotional baggage, and it’s not hard to believe her once we get past how careless she is in the Warrens’ museum. She gives Daniela a terrific mix of high school-age smartass and damaged soul, bearing several different loads and having to deal with the repercussions of her actions. It’s a little gem of a performance which makes you all at once pity and resent her – the pity being for her circumstance, and the resentment for the major stupidity leak which kicks this movie into high gear.

But once it starts, the frights come nonstop, jolting us out of our seats every few seconds with jump scares and a brutal attack on our senses. Annabelle Comes Home falls in a weird place in the Conjuring Universe, not being serious enough to fit in (the running joke of Bob’s nickname is a large hint as to how this film should be taken) but winding up scarier and more involving than 2014’s Annabelle. First-time director Gary Dauberman knows how to make us leap out of our seats or scream in terror, making this one surefire haunted house film which doesn’t fall short of its desired goal to entertain. The infusion of ‘80s-style teen horror might cheapen this series’ impact a little – especially with a certain character using Bob’s nickname – but if the film only covers one night out of so many in the Conjuring Universe, just look past it and enjoy Annabelle Comes Home on its own terms.