Two words come to mind when thinking about First Kill; they’re two words that have gained traction of late, and I’m hesitant to use them. However, nothing can sum this movie up better than these two words, and they are “toxic masculinity.” It’s a fitting phrase which encompasses the learned behaviors of men who see life as a domination game. It takes all forms, from the knuckledraggers at clubs and bars who think they’re entitled to whatever woman they hit on, to the kind of thinking which drives First Kill. 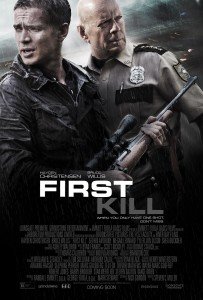 Our first glimpse of this comes as Wall Street suit Will Beemer (Hayden Christensen) goes to his basement and unearths his hunting rifle with a fond look. Why? He wants to take his 11-year-old son Danny (Ty Shelton) on a hunting trip in his small hometown of Granville, Ohio. This, he theorizes, will fix Danny’s confidence, which seems to be lost due to him being constantly bullied at school. Will waxes nostalgic about how he was a good hunter at half Danny’s age, and that he won’t know what he’s made of until he pulls the trigger.

Really? I’m not knocking hunting as a way of feeding one’s family, but for a father to put that kind of pressure on his child as a means of building self-esteem? Finding self-worth by harming a creature who can’t fight back – isn’t that what started this whole thing in the first place? [For all of Will’s shortsightedness, at least he’s good about teaching Danny how to properly handle a gun (which immediately gets negated by Will leaving the rifle unattended!).]

This misguided lesson in Being A Man puts them into a position to witness a shooting over loot from a bank heist (seen in the pre-title prologue), which gets worse when Will has to kill someone in self-defense. And hold on – it goes from worse to worst when it’s discovered the dead guy’s a cop, which brings the walking hard-on of a police chief (Bruce Willis) into the situation. Chief Howell is a fairly no-nonsense kind of guy, but he seems to have a bad thing for wanting to get in Will’s face.

Forget what you know about Bruce Willis. Forget his range, his skill, and the acute subtlety and nuance he brings to his roles. Steven C. Miller’s unfortunate direction has him at full tilt the entire time, almost as if he purposely guided Willis to be an anti-actor. As Howell, all he can do is glare, shout, and bark in a voice meant to emote, but it just doesn’t work here. It’s not a pointless character, though; Howell is just another rung on the “terrify those who can’t fight back” ladder around which this movie is centered. He singles out Will, putting him deliberately in his crosshairs because he figures he’s just a city boy who doesn’t know anything.

Speaking of Will, Christensen’s stuttering, ham-fisted performance can’t handle all of the swings his character goes through in the film, progressing from harried father to showing manliness in front of his child to being a simpering victim. It worked in his best performance as Stephen Glass in 2003’s biopic Shattered Glass, but it doesn’t cut it in what’s meant to be an action-thriller. His final turn at the film’s climax into the cold-eyed man on the trigger seems way out of place; but then, so does his character throughout the film.

As must happen, Danny finds his way into the clutches of one of the robbers and held for ransom. Levi (Gethin Anthony) doesn’t seem a bad sort; he’s merely a guy who saw an opportunity he had to take due to personal circumstances, and now he’s the fall guy. He’s probably the one likeable person in the film; he’s the kind of character Trent from Swingers describes as “the guy in the PG-13 movie everyone’s really hoping makes it happen.” He may have kidnapped Danny to achieve his own personal ends, but that doesn’t mean he’s going to hurt him to do so. He just wants what’s his, and he’s sure Will can help him get it.

First Kill suffers from overambition and overdirection. A more shaded approach to these proceedings would have served the film well, had the script not been as cliché-ridden and ugly. There’s a fairly exciting car chase through the woods which seems well-choreographed and executed, but the kinetic photography is suddenly calmed down by smoothed-out, high-angle shots. This alone serves as a metaphor for everything wrong with the film; all the ingredients are in the right place and what needs to be on camera is there, but it’s taken one step further than it should. Had Willis and Christensen been dialed back just a bit, this film would have stood a chance at being something to watch.

There’s nothing clever or memorable about First Kill; it’s a retread of films like Surviving the Game and Hard Rain, and I’d even throw Savannah Smiles into that mix. The pithy last-minute attempt at dismissing the “killing to find out who you are” notion rings just as false as the rest of the movie preceding it. First Kill is the kind of movie you’d see on Showtime after they dish out the softcore adult movies, leaving one to wonder how Bruce Willis has gone from Die Hard to this dreck in a span of 29 years.