Posted by Michael Parsons on January 26, 2017 in Movie Reviews / No Comments

Unless we’re including an old summer camp video I just dusted off, “VooDoo” is probably the worst found-footage movie I’ve ever seen. The sub-genre has made horror more accessible for up-and-coming talent, but at the same time, it is burdened with two things: appearing authentic, and justifying why such footage would exist to be found in the first place. As a horror fanatic and ardent appreciator of indie fare, I get no enjoyment from bashing a filmmaker for their efforts, but Tom Costabile’s incomprehensible shit-show invites no other such treatment.

If “VooDoo” were intended as a parody, it’s not obvious enough. Kind of like Will Ferrell and Kristen Wiig putting on a straight face for that Lifetime movie “A Deadly Adoption” (it exists, in case you think I’m kidding), it hews too close to its influencing style to suggest that it’s self-aware. The aforementioned is a strange comparison to make—the former was indeed a dry satire with two well-known comedians—but I scratch my head trying to in some way make sense of the latter’s overt and unparalleled badness.

The plot revolves around southern belle/floozie Dani (Samantha Stewart), who heads to Los Angeles to visit bestie Stacy (Ruth Reynolds) and put a string of crappy relationships behind 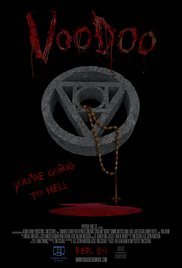 her. While there, she wants to record everything that happens for her dad (strange what she later chooses to chronicle for her old man). Hence, the camera.

Unfortunately, what happens in New Orleans doesn’t stay in New Orleans—at least I think that’s where Dani’s supposed to be from, based on the terribly overplayed accent (ironically, the actress is from the south). Anyway, the wife of her latest fling happens to be proficient in the dark arts, and a curse is  following Dani to the West Coast.

Fine, even promising  on paper, but the actors are clearly acting from the outset (and poorly at that), which is only pronounced by the monotony of its first forty minutes. If you know found-footage, such a trait is not conducive to a style that is predicated entirely on  realism.

As advertised, the curse kicks in. About ten minutes in the middle of the movie look like they’ve been swept of the cutting floor of a “Paranormal Activity” installment–with the exception of one freaky shot (too little to add much to this turd)–before Costabile thrusts us into something that reminded me of something between “Salo” and the haunted house ride on the boardwalk in Ocean City. The entire way, “VooDoo” struggles, and then utterly fails, to validate how or why this is all being captured on a video recorder. From a heated argument between Dani and Stacy to a near sex scene to a chance encounter with Ron Jeremy at a nightclub, the camera rolls. When we finally pass through occult headquarters and on to the gates of hell, you might feel like you’ve already been there.

I guess sorcery takes over DP duty for the climax, so to speak, which is far too nonsensical to resemble anything coherent or scary, but then too disturbing in its intended effect to outright laugh at. The folks in the lighting and sound departments deserve to be in a better movie. By the time the ordeal is over, you won’t likely be wondering about the past that  haunts our main character, or what happened to the two lunkheads (Dominic Matteucci, Daniel Kozul) who appeared in the first half. I guess they were transformed into a couple of the demonic minions that torment Stewart, who  I give credit to for being able to scream and flail in excess of 30 minutes.

In Select Markets including Washington, DC on February 24th