Posted by Michael Parsons on December 17, 2016 in Movie Reviews, New on DVD and Blu-Ray / 1 Comment

A beautiful expansion and somehow first ever feature adaptation of Antoine de Saint-Exupéry’s book, “The Little Prince” is my favorite animated pic of 2016 (second would be “Kubo and the Two Strings”). The story of a little girl (Mackenzie Foy) whose “life plan” is broken down to each minute of the day by stiff, over-achieving mother (Rachel McAdams) wraps around, and eventually integrates into, the classic French tale. Screenplay writers Irena Brignull and Bob Persichetti create a smart and thoughtful correlative to the memoirs of The Aviator (Jeff Bridges).

Spawning from Exupéry’s own experience crash-landing his small plane in the desert, the core story (the book) is shown in gorgeous stop-motion animation that tells of a little boy from another planet the size of an asteroid. So small in fact, that he can see multiple sunsets just by scooting a few feet.  After leaving a vain, red-petaled metaphor behind, he 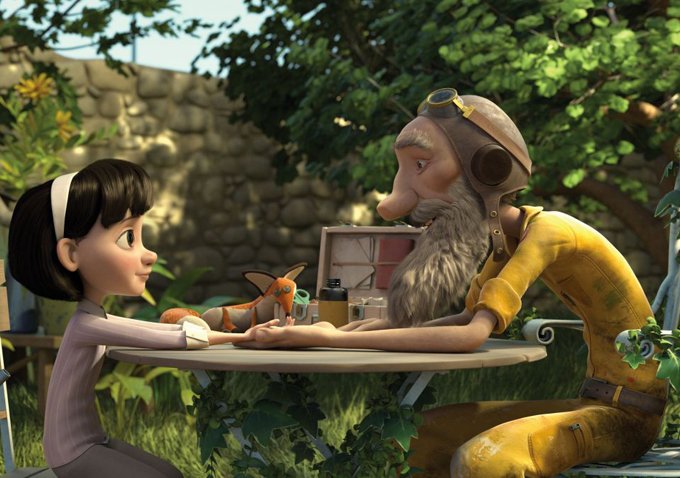 searches and searches for a new planet, carried by a flock of birds. (If you haven’t read the book, just stick with me please).

He ends up on Earth, where he meets a fox and a snake, each with their own existential adumbration, before meeting the pilot. He has a simple yet odd request: “Please draw me a sheep”.

Sharing this story is a now-elderly Aviator, neighbor to the little girl, who becomes entranced by his adventure-filled yarn and curious about the busted plane that sits in his backyard.

This newly crafted framework story is computer-animated in lively, funny, exquisitely designed contrast to the tale of The Little Prince. In it, the little girl laments her overly structured life, which leaves no time for friends, her summer break  consumed by studying. The Aviator seems like the fun grandfather she never had, an escape from academia.  His house is full of knickknacks ; “Hoarder, that’s what they call it. I’m a hoarder”.

And the story of The Little Prince, which eventually overlaps into the girl’s life when she comes to understand the meaning and timing of its telling, has her facing some pretty harsh truths. It’s to be noted that the source material was not written for children—ultimately, the message is rather bleak; likewise, the girl ends up venturing to a pretty dark place. But it’s also quite enlightening. Director Mark Osborne (“Kung Fu Panda”) has crafted something that is okay for young ones without compromising the essence of Exupéry’s work; it’s a delicate balance, achieved nearly to perfection, clever and inventive.

I loved this film because it’s genuine, beautiful, unusual and, I suppose, timeless;  it’s funny and sad and moving like 2014’s “Song of the Sea”. Bridges and Foy feel like they’re occupying the same space when voicing their roles. This isn’t just a great animated flick, it’s an incredible movie. The additional cast are too many to list: James Franco, Ricky Gervais, Albert Brooks and Paul Rudd, to name a few. Marion Cotillard voices the Rose that the prince left behind.