Posted by Michael Parsons on December 19, 2016 in Movie Reviews, New on DVD and Blu-Ray / No Comments

What do you get when you cross an animator with a director who specializes in raunchy adult humor? Not “Sausage Party”, believe it or not, but Warner Animation’s “Storks”, a kid-friendly yarn that is also funny enough to engage the grown-ups. If we’re talking about a way to fill 90 minutes and you just can’t watch “Zootopia” for a 15th time, this one is a safe alternative—less ADHD than “Trolls”, wittier than “Secret Life of Pets” and far more energetic than “Finding Dory” (don’t get me started on “Angry Birds”). Though if you’ve ever told your young ones that this is where babies come from, you might have some explaining to do — since storks now deliver things like cell phones exclusively for a massive Amazon-type.com conglomerate.

Andy Samberg voices Junior, an ambitious stork all set to take over for head honcho (Kelsey Grammer) at the warehouse. All he needs to do is fire Tulip (Katie Crown), an accident-prone human orphaned at birth after her delivery address was destroyed, now a teen whose inventive nature tends to cause a dip in profits. Junior instead relegates her to the mailroom, which remains unused since they shut down the baby-maker some time ago. Until she receives a letter requesting a baby brother from young Nate (Anton 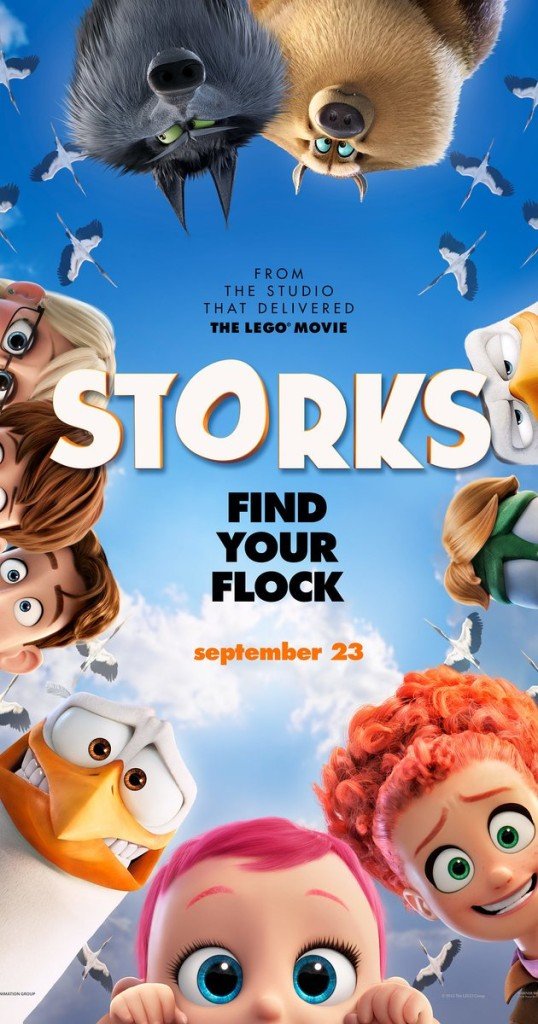 Starkman), an only child whose parents (Ty Burrell, Jennifer Aniston) wear their Realtor® hats 24/7. A slight hurdle en route to Junior’s promotion, when he finds himself with an infant to deliver and a lame wing. Thankfully, Tulip has been crafting a plane/helicopter so that she can venture out and find her real parents!

The movie is directed by Nicholas Stoller and Doug Sweetland, the former’s résumé heretofore defined by flicks like “Neighbors”, “Sex Tape” and “Get Him to the Greek”. But, somewhat like writer/director David Gordon Green, his departure from that tired brand of comedy shows some real talent.

Highlights of the movie include Danny Trejo as a creepy  excommunicated stork, and comedy duo Key & Peele as Alpha/Beta wolves whose  resourceful pack can collectively form of anything from a bridge to a boat (just not an airplane). Funniest is a hairpiece-wearing pigeon with an extreme Napoleon complex (Stephen Kramer Glickman).

Surely, there’s a “Storks 2” on the horizon. And why not? We’re on like “Ice Age 9”. And only here can you see a cartoon version of Phil Dunphy from “Modern Family. Ty Burrell must have been in real estate in a past life.