Posted by Eddie Pasa on December 9, 2016 in Movie Reviews / No Comments

Film critics like to throw around the term “tour de force” to describe a performance which dominates an entire film and leaves a lasting impression upon the viewer. Myself? I’ve used it twice in film reviews, once in a theater review, and I’m about to use it a third time, as it aptly describes Jessica Chastain’s portrayal of the title role in Miss Sloane. Very few times have I seen such a role and performance provide power not just for the actor, but for the rest of the film itself. 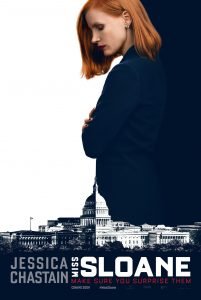 I’m not saying the rest of the actors don’t fill their roles well or are merely fodder for Chastain to bounce off. Hardly – the rest of the cast is able and up to the task of matching Chastain’s intensity and drive. What also helps is that with no more action than five gunshots (all of which take place in a sequence lasting less than two minutes), this film carries an air similar to a Jason Bourne or John McClane film. There aren’t any explosions, car chases or big John Woo-esque gunfights; this film’s action is political maneuvering and posturing, with brains and the media being the weapons.

As one of the most sought-after lobbyists in Washington, D.C., Elizabeth Sloane doesn’t play to lose. Uncompromising and unflinching, Sloane doesn’t care if you’re the rich as Croesus or don’t have a dollar to your name; she’ll make mincemeat out of you if she doesn’t like you, or she’ll treat you with a barbed indifference if she does. It’s her world, and everyone else is just visiting. Her reaction when a man representing “The Gun Lobby” tries to enlist her services to swing more female voters towards gun rights? Brazen laughter and condescension, to which her lobbyist firm president George Dupont (Sam Waterston) doesn’t take kindly. 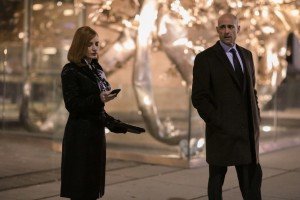 On the other side of this fight is Rodolfo Schmidt (Mark Strong), who offers her a job at his lobby firm to fight for gun control. After pitching her the idea and giving her a slip of paper telling her what she’ll earn for doing this, she accepts and promptly quits her firm, poaching five of her six team members – Jane Molloy (Alison Pill) being the lone holdout – in what’s referred to in the film as a “Jerry Maguire moment.” Right away, she and her team set to work for Schmidt, disrupting his firm’s chillaxed, mellow vibe with their fast, brash, and instinctive behavior.

One of Schmidt’s staff members, Esme Manucharian (Gugu Mbatha-Raw) sees Sloane all at once as a force to be reckoned with, a freight train out of control, and someone from whom she could possibly learn a thing or two. But that all changes when Sloane makes Manucharian the public face of the battle they’re waging, opting instead to pull the puppet strings and run her operation any way she sees fit, including illegal surveillance, hiring actors as protestors, and other such gray-area machinations. 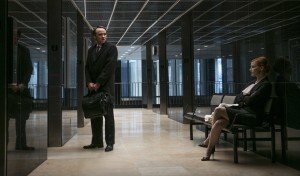 There’s only one way it can end, and it’s made plain where things are going in the opening moments of the film, as it starts at a pivotal moment in Sloane’s life. Much of the film is told in flashback; the film runs on two different parallel timelines, with the present day informing what we watch in the past. This Memento-like storytelling keeps the viewer interested and invested, leaving us hanging on every word, every intimation, and every step Sloane takes to try to stay ahead of her former employers.

It’s a fascinating, morality play-like thriller which works its damnedest to keep you riveted and tuned in. We see how emotionally and psychologically damaged Sloane is, and how this damage plays into how she works people. I say “works people” instead of “works with people” because that’s exactly what she does; she makes others, even those on her team, dance to the tune she’s playing on a twisted fiddle, with the final note – and why and how she chooses to play it – known only to herself. 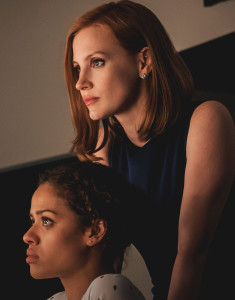 Of course, being about the gun debate, you’ll see and hear a lot of what passes for news in this day and age – bad guys with guns, good guys with guns, and where the rest of us are left in this resurrection of the Wild West which our society seems to be quickly becoming. But that’s neither here nor there, as we’re here to watch a woman navigate life on her own terms, no matter how shady the deal or how costly the price. Jessica Chastain drives this movie with one hand on the steering wheel and the other on the stick shift in high gear, speeding down an uncharted road with a map only she can see.