Do me a favor before you read this review – click the “Play” button on this video and turn your computer’s sound system up to about 65%. Be warned: it’s kinda frightening. Get ready to be scared.
Don’t worry… I’ll wait. 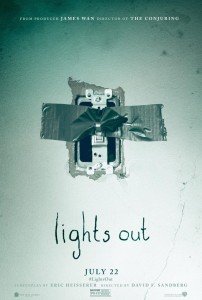 Creepy, huh? That’s a taut nailbiter if I ever saw one. Writer/director David F. Sandberg and his wife Lotta Losten give us a tight 153 seconds of suburban horror; looking at his Vimeo page reveals more short films which feature universal stories of how you’re sitting home alone and you hear or see something strange. They do well in their short form, sticking the dagger in and leaving it to sting while not giving any sort of relief.

After this short went viral, Sandberg was offered a chance to direct a feature-length expansion of his short written by Eric Heisserer, whose most notable screenplays have been based on existing materials. Among them were a fair-to-middling prequel to 1982’s The Thing, the above-average Final Destination 5, and the wildly unnecessary remake of A Nightmare on Elm Street. Sandberg’s film would also be gifted one of the best talents in modern horror, James Wan, as a producer. With Sandberg’s talent behind the camera and Wan lending his name and assistance, one would hope Heisserer would up his game to their levels. 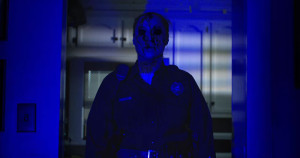 Well, it isn’t for lack of trying, but two out of three ain’t bad. The feature-length Lights Out doesn’t lack for scares or for visual mood, but with the addition of a hackneyed backstory which seems like a cross between The Ring, Fight Club, and Paranormal Activity, Lights Out never rises to the greatness of the original short. Frankly, it feels like a reversal of “Soft Light,” a second-season episode of “The X-Files” which dealt with a man who kills by having people walk into his shadow. Instead of keeping things visceral and punchy, Heisserer’s script does more telling than showing, eventually forcing the film to a dragging crawl with overexposition.

Truthfully, I’d like to give the benefit of the doubt to the screenplay for trying to sustain the mood and scares of the two-minute original over 81 minutes. Sandberg’s original scares are put into the context of a family haunted by a malevolent spirit with ties to a character’s past. It’s fairly easy to digest and it’s not completely out of the ordinary, but the way it’s told is dull, no matter how much Sandberg spices the tension up with the things that go bump in the night. 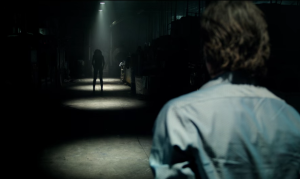 And a bumpin’ those things go, indeed. First, we’re treated to a near-remake of the original short in the film’s cold opening, with textile worker Esther (Losten, reprising her role) and her manager, Paul (Billy Burke) being haunted by a silhouette which only appears outside of direct light. Make no mistake – Sandberg seems completely comfortable here as he puts us through familiar paces set by the short film. Even with the additional character, this opening sets a chilling tone as the fatally inevitable comes to violently pass.

Following this incident, Paul’s estranged daughter Rebecca (Teresa Palmer), stepson Martin (Gabriel Bateman), and his ex-wife Sophie (Maria Bello) are seen reeling. Sophie, even more so – she’s taking mood-altering drugs and not coping very well at all, to the point where Child Protective Services is called in on Martin’s behalf due to him sleeping in school. Rebecca, living on her own – and very guardedly independent, to the point where she won’t let her boyfriend Bret (Alexander DiPersia) leave a toothbrush in her apartment – takes Martin into her care at this point, where a lot of the family dynamic is explained in this first of many retellings. 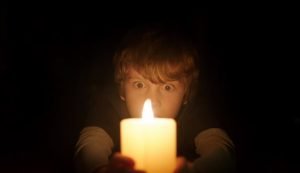 It’s now that both Rebecca and Martin start seeing the very same figure in the shadows… and the game slowly shifts from not a question of if, but a matter of when the flickering, seemingly-uncooperative lights surrounding and protecting them will fail. During each of these imaginative and harrowing confrontations with the spirit, Sandberg’s veteran-like direction in concert with Marc Spicer’s lighting and photography help dial the tension high, making these sequences into little white-knuckle thrillfests.

However, it’s the material in between – the constant squabbles between Rebecca and Sophie, the heated rehashing of Sophie’s childhood and her friend named Diana (Alicia Vela-Bailey), and the stereotypical “I like you but I’ll keep you at arm’s length” thing Rebecca’s got going on with Bret – which winds up feeling like stalling tactics instead of being vital character developments.

Don’t get me wrong, these plot points are necessary for the film, but the way Heisserer has written them makes them only perfunctorily so. It kind of reminds me of the type of exposition The Blair Witch Project gave us when Heather would say, “You remember what that person said back there?” It’s hard to get behind Rebecca when she’s being a bitch to pretty much everyone except for Martin. And what little time we spend with Sophie never gives us any kind of picture as to who she was before Paul’s death and how far she’d gone into the rabbit hole.

You can see the edges of something great begging to come out of what wound up being Lights Out. The premise is strong enough on its own and Sandberg directs the hell out of the spook sequences, only to be undone by a script which threatens to take away any of the goodwill Sandberg builds. It’s an uneven movie at best, and a waste of potential at worst.