The biggest reason to see The Nice Guys is that you’re going to see something you have never seen: a Shane Black misfire. The hell you say, you might be thinking to yourself, Shane Black’s kung fu is the best. There’s no disputing that; known for his peppery, hardboiled pulp detective-type scripts (Lethal Weapon, The Last Boy Scout), great work behind the camera as director (Kiss Kiss Bang Bang, from his own screenplay) and getting slick, well-nuanced performances from his actors, Black has a track record that can’t be beat. I always look forward to each of his offerings with bated breath and wild anticipation. 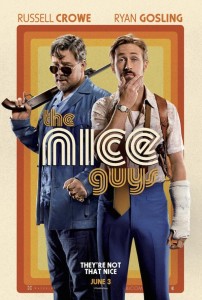 Such was the case with The Nice Guys. You have Black wielding a loaded .44 Magnum – “The most powerful handgun in the world,” as Dirty Harry once said in his eponymous film – but the firing pin can’t quite seem to touch the primer to lead to the big explosion. Here, we have Russell Crowe almost reprising his role as Bud White from 1997’s L.A. Confidential, but this time as Jackson Healy, a self-styled enforcer who’s as comfortable feeding his fish as he is knocking in doors and braining various offenders with his brass knuckles. Tough, menacing, stocky, and grizzled, he’s got nary a fear in the world and all the time in the world to prove it.

Also entering Black’s stable is Ryan Gosling playing a permanently-sozzled, fast-talking, coward of a private detective, Holland March. What’s more, he’s got a pre-teenage daughter, Holly (Angourie Rice), who winds up being his everything – secretary, conscience, chauffeur, witness, you name it – and the way the two Marches talk to each other seems to switch with Holly’s role at the time. If she needs him to kick it into gear and get off his ass, there’s a lot of sharp dialogue between them. If they need to have a tender moment as father and daughter, there’s that, too. Need the story explained to you? They’ll do it as detective and sidekick. This seems to be the shrug-it-off coping mechanism they use to deal with the offscreen death of Holland’s wife. 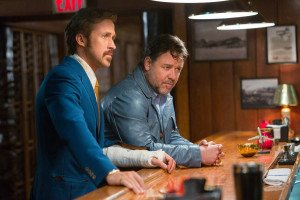 There’s the setup; with this amount of talent, you figure Black’s got it in him to give it to us with everything he’s got, right? Well, he does, if only in fits and starts; there are laughs, but very few of the kinds of laughs you’ll find in Kiss Kiss Bang Bang. Then again, The Nice Guys is a wholly different movie, but it’s not out of the realm of reason to hope for some of the same Black magic again, is it? Here lies my problem with The Nice Guys: it’s not enough of any one element to make it firmly in one court or another. It defies expectations by defying genres. It’s funny in places, but not funny enough to be a comedy. There’s action, but not enough to warrant the “action movie” moniker. Drama is also inherent, but it’s waved off almost as quickly as it appears. 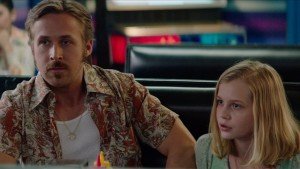 It’s hard to take anything seriously in this movie, and maybe that’s where the comedy lies; however, its lack of any kind of esprit bothers me. Gosling’s yippy portrayal of a widowed drunk father tries to alleviate the brooding weight of Crowe’s Healy, contrasting March’s slick moves with Healy’s brute force. But then they bring the daughter into everything, and what starts to become a fairly decent buddy-detective flick gets hamstrung by this sudden baggage we’re expected to care for and adore, and this also brings me to another point of contention with the film. 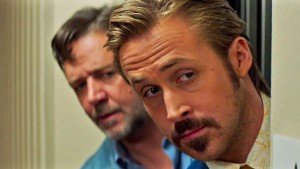 Instead, we’re left viewing what could very well be another story found in Paul Thomas Anderson’s Boogie Nights, an epic film set in the ’70s porno world. The glamour, glitz, and notoriety are all there; it’s just a case of bad luck that our heroes – really, anti-heroes – have to jump in and swim with the fishes. Crowe’s Healy is shown to be a man who doesn’t need the bottle or a gun to be a badass; he just is, but the several character moments he’s given barely flesh out the type of man Black and Bagarozzi hope we believe he is. Holland March is given the lion’s share of the development, as his story seems to be the more funny of the bunch, considering his coward-like tics and just-beneath-the-surface benevolence and hidden bravery.

Look, I get it. Writers and directors known for doing strong work aren’t always going to show us the same thing every time, and I can appreciate that. However, when the name “Shane Black” appears on the production credits, it usually means snappy dialogue and characters who leave you rooting for them almost as soon as the movie starts. With The Nice Guys, he almost seems to want to turn that on its head and defy his own mythos by giving us a bare-bones structure and easy laughs. It’s not as smart as his previous turns, and it’s definitely not his best outing as both writer and director. However, by not going with his standard route, he might just be giving us something new and fresh. Doesn’t feel that way, but I think with a second viewing, it just might.