The opening credits of Eddie the Eagle informed me of actor Dexter Fletcher’s involvement as the film’s director. And why not? The first time I ever saw Fletcher was in a 1976 film called Bugsy Malone, in which child actors portray Depression-era gangsters both battling with and against an army of Depression-era breadline denizens at its climax. One of these down-and-out characters was a character named Baby Face, played by Fletcher – a little 10-year-old kid whose main job is to function as a distraction by going up against others three times his size. He does this successfully, but after a bit of coaxing and self-assurance that he’s got what it takes to make this happen. 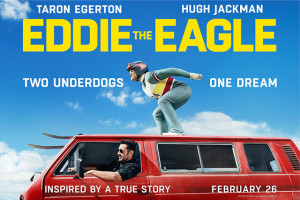 Forty years later, Fletcher takes a similar tack with Eddie the Eagle, an underdog story that extols the virtues of simply being a part of something bigger than life or oneself. He tells the lighthearted story of Eddie “The Eagle” Edwards (Taron Egerton), the longsighted British ski jumper whose childhood dreams of being an Olympian – hilariously played out under the opening credits – come to full fruition thanks to his guts and his spirit.

With no financial or emotional support from anyone, Edwards takes it upon himself to be England’s first Olympic ski jumper. After stealing his father’s van and crashing a German training site, Edwards gets his first taste of how dangerous ski jumping can be as he goes from one run on the small jump to the 70m ramp. Tough-guy maintenance worker Bronson Peary (Hugh Jackman) – coincidentally a former American ski-jumper-turned-bad-boy – offers him advice, the first bit being to quit now and not bloody himself or the ski area.

Of course, with this being an underdog movie, we’re pelted with all of the requisite standards of the genre other movies have portrayed more successfully and with more heart than this film does. The reluctant coach, the committee whose purpose seems to be keeping Edwards out, the pull-yourself-up-by-your-bootstraps ethic, and of course, the sexy barmaid – yup, it’s all done here. That’s the trouble with Eddie the Eagle – for some reason, it seems to have taken its story for granted and not given us enough substance to get behind. Sure, it’s a fun lark of a movie, but take away its cliché tropes 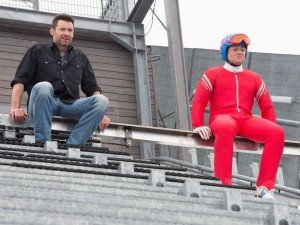 and you’re not left with much.

The whole time I was watching it, I kept flashing back to 2011’s Real Steel, incidentally also starring Hugh Jackman as a washed-up champion getting by doing the bare minimum to survive his post-heyday. His characters in both films – Real Steel‘s Charlie Kenton and Eddie the Eagle‘s Peary – have no desire whatsoever to take whichever burgeoning talent they’re saddled with under their tutelage. Of course, in true underdog film fashion, both of Jackman’s characters wind up forming a bond with their young charges and ride shotgun to regained fame and glory.

Whereas Real Steel made Jackman’s growing bond with his family something to root for and get behind, Eddie the Eagle seems to be content to drop him into the story and yank him out whenever it seems convenient for the drama. Eddie’s haphazard journey from nobody to sudden Olympic star seems to be the only motivator behind Peary wanting anything to do with him, making this staple of underdoggery feel shoehorned and pointless. Let’s not toss aside the fact that Peary’s got some kind of drama with his old coach Warren Sharp (Christopher Walken), who also prances into the story when it feels like there’s just… not… enough… tension to go around. 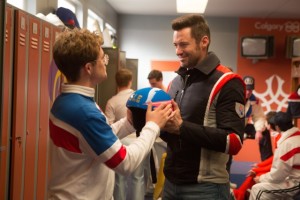 Edwards’ story – a young man too old and heavy to be anywhere near competition level in a sport for which he has received no formal training – has been masticated and regurgitated by screenwriters Sean Macaulay and Simon Kelton into a ho-hum, paint-by-numbers script which seems to float around the neighborhood of “been there, done that” and “got the t-shirt.” It’s almost as if they watched Lucas, Real Steel, Rocky, Run Fat Boy Run, and The Natural to take little bits they thought would make a rousing film, but they missed the part where we’re actually supposed to care about the man at the center of the story. There’s little separating this from the rest of the come-from-behind chaff that so readily populates various sports movies and early Adam Sandler movies.

Yet the notion of just being able to be a part of something as big as the Olympics – not to have any shot at winning, but just to compete, to stand up and be counted – drives the heart of this film. For certain, Egerton’s goofy performance as hapless ski jumper Edwards will put smiles on faces, and the gusto with which he attacks seemingly insurmountable objectives is admirable. This is honestly not a bad film to watch and enjoy with your kids, if only to show them someone making a successful run at being somebody when everyone – including his own dad (Keith Allen) – keeps telling him he’s a nobody. Eddie the Eagle‘s not about interpersonal relationships between coach and student; it’s about living your dream and making the most of your experience, no matter the odds or the obstacles. In that, Eddie the Eagle makes a fine and often hilarious statement about being in the gutter and shooting for the stars.