Posted by Michael Parsons on October 12, 2015 in Movie Reviews / No Comments

Keanu Reeves stars as family man Evan Webber, a DJ-turned-architect (yes, you read that correctly) living comfortably in the Hollywood hills with successful sculptor wife Karen (Ignacia Allamand). Though their given professions suggest Garry Marshall-caliber rom-com tropes, jack-of-all clichés Evan is in for a big surprise after Karen whisks the kids off to the beach 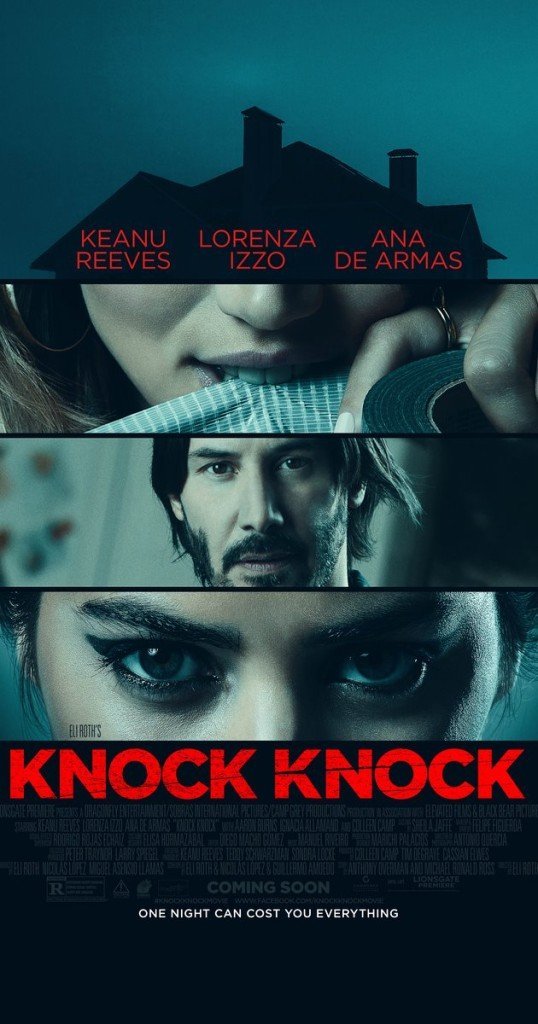 so that he can focus on becoming the next Frank Lloyd Wright, and the script (by Roth, Nicolás López and Guillermo Amoedo) turns into something straight out of Penthouse Forum.

Arriving at his door are Genesis and Bel (Lorenza Izzo and Ana de Armas), two chicks who immediately register seismic activity on the hot/crazy scale. Claiming to be lost, the girls ask to use the phone and dry their clothes, to which Evan obliges, nonetheless perplexed by their presence. In perhaps his only moment of clarity, Evan calls them an Uber taxi, but in the hour it will take for the car to arrive, he’ll need to suppress his libido like Superman thwarting the launch of a nuclear missile in order to fend off their less-than-subtle sexual advances.

Unfortunately, these girls are holding the Kryptonite, which lurks beneath the conveniently fitted bathrobes provided them by their reluctant host. They finally get the better of him, and things get explicitly kinky, suggesting that all men, no matter how devoted, would eventually succumb to such base instincts if put in a similar situation (which here is closer to rape than seduction). This would later be the argument for the girls, who it seems have done this sort of thing before. And boy, is he going to pay for his transgression.

Evan awakens to find that his nympho house guests have transformed into a couple of demented sorority rejects, trashing the house and taunting him playfully like a couple of teenagers desperately in need of ADHD meds. He finally gets rid of them, dropping them off in some random suburb where they claim to live. But it’s not long before they show up again, this time more sinister than flirtatious, two full-fledged psychopaths waging war on the married male Hollywood population, one unfaithful penis at a time.

Roth favors cheese over blood in this remake of 1977’s “Death Game”, dabbling auspiciously in the home invasion sub-genre in the company of recent flicks like “The Purge”, “Funny Games, “The Strangers” and “You’re Next”, while taking it in a slightly less aggressive direction. After his recently released stomach-turner “The Green Inferno”, with which “Knock Knock” shares three actors (Izzo, Allamand, and Aaron Burns), two-thirds of its writing team and DP Antonio Quercia (whose exceptionally smooth camerawork distinguishes this from just any trashy midnight thriller), one might not identify this relatively mild film with Roth if they didn’t know better. It’s sexy for a spell, briefly suspenseful and invariably comical, though that last quality pervades the final act as the girls are intent on drawing the devil out of a decent guy in increasingly ridiculous ways. It’s admittedly intriguing to see Reeves playing a victim (this never would’ve happened to John Wick), but I’m not sure if all the screaming and pleading required for Roth’s twisted brand of humor suits him. Like Evan’s home, which  goes from looking like an art gallery to a freeway underpass during the course of the movie, Reeve’s amiable character eventually gets very, very ugly. It’s worth the film’s final punchline, which is priceless.