Posted by Michael Parsons on October 11, 2015 in Commentary, Movie Reviews / No Comments

“Bite” will undoubtedly draw the attention of gore-hounds who are curious why it caused such a stir at Fantasia Film Festival, where paramedics reportedly had to come to the assistance of several intestinally-distressed audience members.

My prognosis is food poisoning. Chad Archibald’s monster movie, which sinks its teeth in early but cuts itself off at the knees, observes in much icky, gooey detail the transformation of a young woman into a giant insect. But gross as it is, “Bite” should be tolerable for anyone who has ever witnessed shingles or explosive salmonella.

Director/story-originator Archibald (“Ejecta”) and screenwriter Jayme Laforest (“Gods of Accident”) are content to leave it to the set design and top-notch make-up, which is enough for a while, as the film develops into something between Cronenberg’s “The Fly” and Carter Smith’s much more gruesome and underrated “The Ruins”, before running out of ideas. 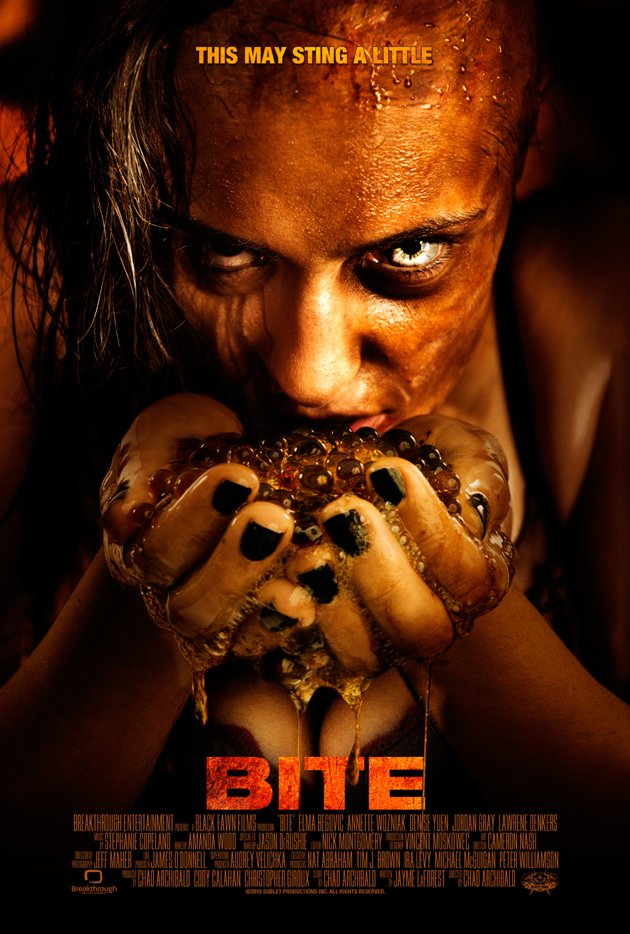 Somewhat like the latter movie, a young woman on her bachelorette getaway (Elma Begovic) finds herself hosting a horrific bacteria in an exotic land, in this case Costa Rica, after sustaining a bite from something in an idyllic fresh water spring. She returns home to fiancée Jared (Jordan Gray), a kind of douchey dude who lives under the aegis of his overbearing mother (Lawrene Denkers), thinking that cold feet is her biggest problem.

But a festering rash proves to be of more urgent concern. Maybe an STD she’d picked up from a strapping young buck down in Central America? Well, we know better, even though evidence of infidelity lingers vaguely in the video taken by her friends (Annette Wozniak, Denise Yuen, Tianna Nori), one of whom seems to have an ulterior motive when it comes to their friendship.

But “Bite” never quite gets under the skin enough to truly shock, at least beyond the favorable effect it’ll likely have on the industrial lubricants market. The film suffocates an interesting core theme before it has a chance to develop, with the gore that comprises the movie’s third act proving more redundant than repellent. The ultimate irony spills into the final frames like a bursting sack of caviar.

But as far as eerie, claustrophobic setting goes, “Bite” has it in spades, as the metamorphosis takes place primarily within the confines of a small apartment where Begovic earns serious credit for a role that even Linda Blair might have turned down considering the physical demands. A fate that, as we see, might be less agonizing than dealing with her future mother-in-law/landlord from hell.