There are a multitude of reasons why The Intern is irresistible and delightful. Yet, since we are in writer/director Nancy Meyers’ world, there are a few reasons why it could be seen as elitist and exclusionary. I’m at war with my own opinion of this movie because I walked out at film’s end gushing about it, having fallen in love with the uplifting script, the story, and the gentle performances by Robert De Niro and Anne Hathaway. I wish I didn’t have to take away from that, but let’s look at the facts. 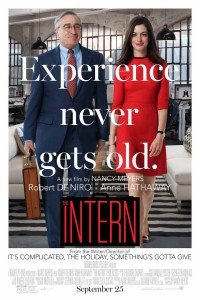 Nancy Meyers’ previously-scripted films (most of which she also directed) – Something’s Gotta Give, It’s Complicated, the remakes of Father of the Bride and The Parent Trap, The Holiday, even as far back as Irreconcilable Differences – all feature several similar characteristics. Sharp and funny scripts aside, they mostly feature divorced couples getting back together, kids being neglected, relationships marred by cheating, male characters looking like idiotic buffoons (and conversely, male characters having no spine), and a tendency to focus on the upper-class and the moneyed. Also, all of her main casts in every movie have been predominantly Caucasian with very little diversity.

That being said, are we to take her movies as films in their own pantheon and judge them merely on their story and its merits, or are we to apply a level of criticism to her films that would include calling them out for being stuck-up and racially lacking? While The Intern spoke to me on several different levels, I can’t help but feel like it’s not fair that the only person of any ethnic persuasion I think I saw in the whole film was an African-American woman who had a wordless role as a warehouse worker. 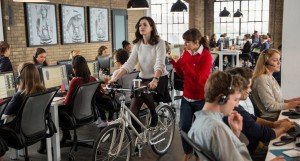 At face value, The Intern is an absolute joy. Here, we have sharp 70-year-old widower and retiree Ben Whittaker (De Niro) who’s introduced to us through a video résumé he’s submitting for a senior internship at About The Fit, an internet clothing boutique owned and operated by Jules Ostin (Hathaway), who’s introduced to us as she spends time on a customer service call. There is nothing unlikable in either of these characters while they prove themselves capable in each other’s eyes; he is assigned to be her intern, and she shows him how she manages her business in her caring and genial way – her introduction tells us she cares about her business, her employees, and the boutique’s clients. Hathway makes her powerful and vulnerable all at the same time, captivating us with equal parts gusto and an undercurrent of sadness, as Jules knows life’s getting away from her.

Meyers’ script and direction leads us to not merely watch, but befriend both Jules and Ben as they move past being boss and intern, becoming close confidantes and advisers to the other. He endears himself to the whole office, most notably Jason (Adam Devine) and Lewis (Jason Orley), the two employees who share Ben’s workspace, and fellow intern Davis (Zack Pearlman). The film’s central theme – growing up, becoming an adult, and making your own decisions – is painted broadly with these three men as Ben (through little words and actions) takes them from being fratty hipsters and turns them into upstanding gentlemen. 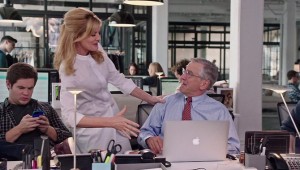 Likewise, too, does he help Jules get a handle on her own life, eventually becoming indispensable to her and the company. About The Fit’s venture capitalists want an experienced CEO to come in and lead the company instead of sticking with Jules and how she runs her own business. She’s a workaholic, sacrificing time with her family to make sure things are done right and are done her way. It’s not really micromanaging; it’s more her wanting to ensure proper quality with her products. However, her husband Matt (Anders Holm) and her precociously lovable daughter Paige (JoJo Kushner) are left in the lurch, himself a former marketing executive in a lucrative position before giving it up to be a stay-at-home dad when Jules’ business took off. However much she doesn’t want to hand over the reins to someone else, she can’t help but notice how much her family needs her and how much a CEO will help her regain lost time with them.

There are a lot of themes The Intern wants to touch on, and it doesn’t miss one. Ageism is more than handily covered through the initial contact the all-young staff of About The Fit has with Ben, but the grace with which he handles this comically offensive ignorance only speaks of his years of experience and his good demeanor. Of course, since we’re talking about senior citizens contrasted with youth, we’re going to see examples of mortality and making the most use of our time left on Earth. Jules also has important roles regarding sexism and reverse ageism, considering she’s a young woman in business and the only CEOs she’s meeting are all older and all male. The battle of working mothers vs. stay-at-home parenting continues its fight in this film, repulsing the audience with some catty examples of the latter. Taking a leap to a larger political metaphor, it could be construed as a women’s choice film, with everyone telling a female what to do with her own body, but I don’t think that’s the case here. 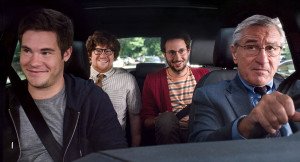 What we’re here is to see the chemistry and interplay between De Niro and Hathaway, two powerhouse actors taking time and having fun with themselves. I mean, where else are you going to see De Niro at the center of a boner joke and have it be cute rather than gross-out? He and his role are simply winsome and adorable, an almost 180-degree turn from the harder roles we’ve known from films like GoodFellas and Heat. It’s almost as if he were playing a retired version of his mononymous mercenary character Sam from 1998’s action film Ronin; both Ben and Sam know exactly what to say, what to do, and where to drive in every given circumstance, and both adhere to functional routines. It may just be a case of De Niro doing De Niro, but for this reviewer, it will never stop being charming.

And that’s what this movie is: charming. Endless, glorious amounts of charming. It’s almost charming enough to make you forget this homogenized, almost fairytale world where everyone’s white, gorgeous, and rich. The Intern qualifies as the ultimate in First World Problem Cinema, where we’re supposed to feel sorry for a young woman whose business is succeeding out of her control. Her need to stay involved in everything has driven her away from her family and friends (the latter of which we see very little in the movie, and even they don’t like her), but it’s okay – she’s failing up. Also, she lives, works, and sends her daughter to a good school in a part of Brooklyn where there’s no crime and no black or Hispanic people. 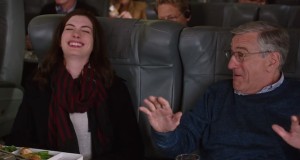 This is a problem I’ve had with Nancy Meyers’ movies. They’re patently inoffensive, lacking diversity, and saddled with corny happy endings… yet you can’t help but like them. Her scripts are bubbly and frothy, pinpricking with edginess without being vulgar, with laughs aplenty and cute moments galore. With De Niro, Hathaway, and the rest of the cast bringing her words to life, The Intern is a broad-reaching comedy that may pack some sap, but at least there’s a ton of sweet to go along with it.