There are several things I like about Guy Ritchie’s films. He never passes up the chance to tell a story in funky, refreshing ways; his use of soundtrack music is impeccable, second only to Quentin Tarantino; the characters which populate his worlds are boundlessly interesting, with their exaggerations used to often hilarious extent; and his use of cinematography techniques from past and present give his films a certain timeless quality. 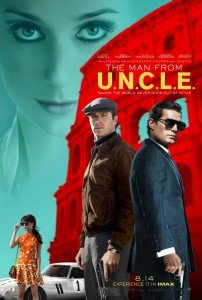 All of these attributes (and more) combine to infuse his films with a distinct, unexplainable layer of “cool,” giving him a singular voice and lending his films an easily-recognizable look and feel. Ritchie brings all of this to bear in The Man From U.N.C.L.E., his film adaptation of the classic ‘60s spy TV series of the same name. After languishing in development hell since the early ‘90s, the powers that be have finally found the perfect director and stars for it, resulting in a surprising movie worth more than a single viewing.

The Man From U.N.C.L.E. is an ultimate combination of Ritchie’s love for ‘60s-sounding, staccato-flute-driven score music (like the kind found in Lock, Stock, and Two Smoking Barrels and Snatch, emulated perfectly here by composer Daniel Pemberton), his own particular brand of multi-plot juggling, and the kind of slapdash, rambunctious-schoolboy vibe of Steven Soderbergh’s Ocean’s Twelve. Slam it all into a period piece set in the 1960s after the Cuban Missile Crisis, at the height of the Cold War when tensions between Russia and the US were at their worst, and you’ll find Guy Ritchie right at home and thriving. 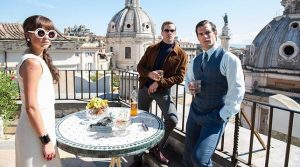 Embodying the spirit of ‘60s-era spies is WWII-veteran-turned-CIA-agent Napoleon Solo (Henry Cavill), a smooth-talking, well-put-together man who could, to quote David Spade from Tommy Boy, “sell a ketchup popsicle to a woman in white gloves.” Soon after being given 15 years for war profiteering, Solo is discovered by the CIA to have a knack for getting his hands on anything he wants, be it goods or women; they dispense with the prison sentence and put his ability to clandestine use for the US government. Cavill plays Solo as if he’s carrying around an invisible, impermeable shield which prevents anyone from disturbing his calm, and it’s easily one of the most enjoyable performances you’ll see all year.

Contrasting Solo’s laid-back demeanor is the intense, pugilistic Illya Kuryakin (Armie Hammer), a Russian spy we first see working opposite Solo’s attempt to aid the escape of Gaby Teller (Alicia Vikander), the daughter of a German nuclear scientist, from Russian-occupied East Germany. He’s portrayed as a more physical man than Solo, as we see him ripping the trunk lid off of Solo’s car during his first pursuit (among other feats of strength and skill). Yet he’s seen to be Solo’s intellectual equal, capable of lateral thinking and terrific problem-solving, as well as having a fabulous fashion sense. 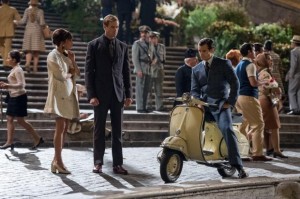 Introducing these two characters as Ritchie does automatically makes us believe in them and their capabilities, and it engages the audience instantly, letting them know they’re not watching dumbed-down, Austin Powers-type spies; these are two men from rival countries at the top of their game being pitted against each other. Ritchie takes a non-condescending tone as we watch these two perform a dangerous waltz, even after they’re assigned to work together for one common goal: stop a dangerous nuclear weapon – which Gaby’s father was forced to help build – from being put into play.

Of course, it’s not all work; The Man From U.N.C.L.E. firmly has its tongue planted in its cheek, with the film being an origin story for not just Solo or Kuryakin, but for the United Network Command for Law and Enforcement itself. There’s subtle spy humor and a will-they-or-won’t-they relationship to keep things light, with much of the humor falling on Solo and his “everything will work out just fine” swagger. A hilarious sequence involving Solo being thrown from a boat Kuryakin’s driving takes a different approach to your standard, conventional action sequence. Some of the action is understated and made specifically so for humorous purposes, while other scenes are more overt and straightforward, exemplified in a warehouse gunfight scene directly preceding the aforementioned boat hijinks. 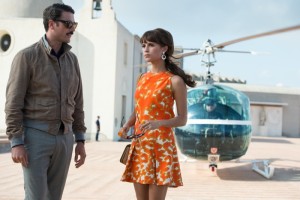 Another interesting thing about the film is its omission of the requisite getting-to-know-you growing pains you might see in such an origin story, as if Ritchie preferred to have Solo and Kuryakin discover each other’s personalities and skills while on the job, not through clunky exposition, energizing the film and giving the film a lively pace. What precious little exposition there is comes from what each person has been told by their superiors about the other, either in the form of a slideshow (look for a cameo in this scene by a popular footballer) or via a dossier one of them has read.

Adding a deft dynamic to Solo and Kuryakin’s antics is Gaby, whose layers of sexiness, smarts, toughness, and just enough vulnerability have a way with getting others to drop their guards. Thankfully, Wikander plays her not as a damsel in distress, but a woman with her own agenda who not only competes, but holds her own with the men sent to protect her; there’s a scene in the early goings with Kuryakin which proves this very point, establishing her as a force to be reckoned with. Also, it must be said: Cavill and Hammer pull off the ‘60s duds well, but Wikander makes her vintage outfits look sensational. 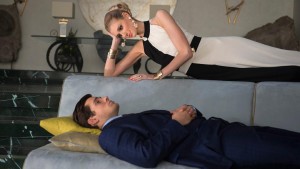 The Man From U.N.C.L.E. stands to be counted as one of Guy Ritchie’s finest, finally dropping him into a frenetic-yet-cool atmosphere for which he is well-suited. You can tell he’s having fun with making this movie and showing it to us, toying with timelines and split-screens, and delivering characterizations so fun to watch, you’ll want to go back a second time. Even though part of me wishes he’d get back to original writing and not directing adaptations, this film is wonderfully bestowed with a raucous feel he established with his earlier, more eclectic work. Low-key and full of suave, cheeky fun, The Man From U.N.C.L.E. extracts the best from Ritchie and his cast, lays it all on the screen, and saunters jauntily away from you while you’re still smiling at its unexpectedly bright effervescence.