Posted by Michael Parsons on August 21, 2015 in Movie Reviews / No Comments

Owen Wilson seems to be a magnet for eccentric auteurs like Wes Anderson, Woody Allen and now Peter Bogdanovich. In Bogdanovich’s “She’s Funny That Way”, his first theatrical release in over a decade (with Anderson as one of its producers), Wilson plays a philandering playwright named Arnold Albertson, who is also known by several aliases he gives to the endless string of call girls that he beds at a fancy NYC hotel. One of the girls, Brooklynite and aspiring thespian Izzy (played by Imogen Poots), falls for Alberston’s charms, as he takes her out on the town and then  offers her $30,000 if she promises to quit the escort biz and pursue her dream as an actor.

His generosity — or whatever you’d call it — comes back to bite him in the butt, when Izzy shows up to audition for a part in Arnold’s upcoming Broadway play, which also stars his wife Delta (Kathryn Hahn) and her big-shot  co-star (Rhys Ifans), who has not-so-discreetly been pining for Delta since 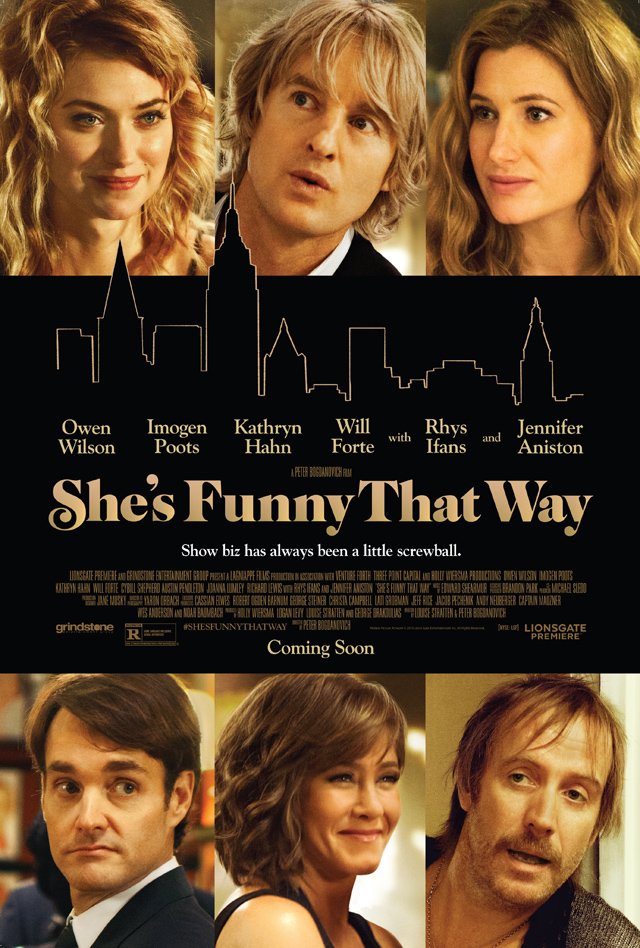 the brief affair they had some ten years back.  Izzy’s shrew of a psychiatrist (Jennifer Aniston) is also in the mix, along with the shrink’s boyfriend Joshua (Will Forte), a colleague of Arnold whose instant infatuation with Izzy is tempered by his Boyscout etiquette. Joshua has competition, though, because an aging judge (played by Austin Pendleton) who was a regular client of Izzy’s and also happens to be a current patient of Aniston’s bitchy therapist, has hired an investigator (George Morfogen) to keep tabs on Izzy.

By that synopsis, “She’s Funny That Way”, co-written by Bogdanovich and first-timer Louise Stratten, sounds like a quirky  mix of “Pretty Woman” and “There’s Something About Mary”, but the film lacks the humor and heart to be anything more than a garden variety screwball comedy in which its all-star cast look woefully adrift in a rapid-fire succession of contrived  scenarios. Wilson doesn’t stray far from  the handful of on-screen personas we’re used to seeing, which at least means that he’s good for a laugh or two, and British co-star Poots, though massively overcompensating to achieve her heavy Brooklyn accent, adds some flavor to an otherwise bland piece of storytelling.

So, while “She’s Funny That Way” is easy to digest, it could leave a bad taste in the mouths of audiences  who expect more from Bogdanovich after all these years. He’s wrangled a multitude of talent, to be sure, but many of the players seem out-of-place in a flick that, in trying so hard to be a clever homage to classic Hollywood films, often feels like it would simply be more comfortable as a period piece.

However, not all of the characters appear to be from the same dimension, let alone timeframe, giving the movie an awkward anachronistic vibe that never makes a whole lot of sense. Particularly Hahn, as Wilson’s increasingly embittered actress spouse,  is called upon for some unusually heavy theatrics and a bizarre, over-the-top affectation that I suppose is designed to emphasize the character’s flare for drama, but instead comes across as silly (Showtime’s funny and touching series “Happyish” is a more accurate meter of Hahn’s ability); Aniston isn’t given much to do, playing essentially a meaner, less animated version of her character from “Horrible Bosses”; most underused is Hader, in an undemanding role as the most likable person of the lot.

On the multiple occasions that these characters converge  — at one point, they all happen to wind up at the same Italian restaurant for dinner, predictably and noisily — it’s one big throbbing headache, and in my case, their intertwined fates became less important than locating a bottle of Advil. Billing also includes Debi Mazar, Illeana Douglas, Richard Lewis and Cybil Shepherd, whose appearances are too brief to characterize, but certainly make the already long roster look that much more impressive.

Select cities and On Demand today.