Posted by Michael Parsons on August 18, 2015 in Movie Reviews / No Comments

With much potential in the first half, this dark but somewhat comical thriller begins sputtering out well short of its brief 86-minute run time, and a hasty and unimaginative conclusion left me feeling utterly deflated.

It’s in a wishy-washy area somewhere between “Hide Your Smiling Faces” and “No Country For Old Men” that “Cop Car” director Jon Watts (“Clown”) loses his way. Star Kevin Bacon draws us in with his character, a crooked rural sheriff in pursuit of two ten-year-old runaway boys (James Freedson-Jackson, Hays Wellford) who’ve jacked his police cruiser and taken it for a joy ride. This would be bad news in any instance, but here, there happens to be a body banging around in the trunk (played by Shea Whigham) that the sheriff hasn’t gotten around to burying yet. 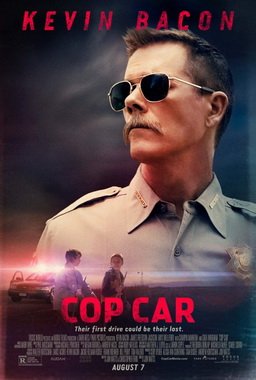 Bacon always plays sinister with a little extra tang, and without his talent, Watts’ movie might have been a complete chore. Instead, it’s just a letdown. This particular role calls for Bacon to be a little ham-handed, and his  lanky, mustachioed lawman scampers around with the awkward energy of Jim Carrey’s Hank from “Me, Myself and Irene”, as the sheriff tries to track down the boys while keeping police dispatch (the voice of Kyra Sedgwick) off his scent. With the handful of other players in the movie (the small cast also includes Camryn Manheim), it’s tough to distinguish where predictability becomes downright stupidity, but either way it’s no surprise when some half-wit gets capped.

Perhaps the scariest thing about this film is the pre-teen duo, who quickly become comfortable behind the wheel of their stolen vehicle as they careen down the wrong side of a country road. Even when the scenario gets really, genuinely scary, these kids seem less threatened than amused by the presence of such things as fully automatic weapons and bloody-faced hostages, exhibiting an unsettling degree of indifference to what transpires (at least until the bullets are finally directed at them).

Freedson-Jackson and Wellford are skilled young actors, without a doubt, but once that initial fog of free-spirited, innocent fun has lifted and things gets real, a couple of little sociopaths seem to be emerging in their characters. If that was the intention, then Watts, who wrote the script with  his “Clown” collaborator Christopher D. Ford, has squandered an opportunity to do something really interesting.

And it feels like the story could be headed in a clever direction on several occasions (a couple of situations felt like they could’ve been lifted from an episode of “Breaking Bad”), only to divert to the nearest threadbare outcome. There is the feeling that it’s all meant to be satirical, but it’s sometimes tough to tell whether it is intentional or just ridiculous. Bacon is worth watching, but even his performance can’t keep “Cop Car” going until the final shoot-out.