Posted by Eddie Pasa on December 12, 2014 in Movie Reviews / No Comments

At first glance, a film like The Imitation Game could be taken as an “inflight movie,” my term for a type of film you’d see on those popdown screens when you fly more than 4 hours with any major airline carrier. It’s a period piece, very character-centric, with nothing visually or aurally offensive – a nonviolent, non-gory, non-sexual film with no foul language. A film that doesn’t require any edits or censoring to make it ready for airline viewing or broadcast on the big four over-the-air networks in the US. 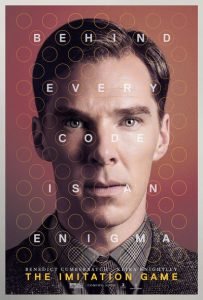 Let’s see what you have: a college mathematics professor, Alan Turing (Benedict Cumberbatch) is secretly hired by the British government to break the most unbreakable German code in World War II – the Enigma code. If broken, countless lives would be saved and the war would end sooner. He’s put into a team with four other men and one woman, Joan Clarke (Keira Knightley), whose parents think she’s in training for something totally altogether different. The film flashes back and forth between Turing’s childhood, the war effort, and his later years, which aren’t very “later,” considering the fact that he died at 41.

However, there’s one thing that makes The Imitation Game a little darker and more disturbing than a regular “inflight movie,” and that has to do with how England dealt with homosexuals – which Turing was – between 1885 and 1967. Doing a little research will provide you with information on the Criminal Law Amendment Act of 1885, Section 11 of which deals directly with “gross indecency,” a euphemism for male-on-male sexual contact. The punishment? Two years hard labor. And if you were caught in the act of sodomy, the penalty was life in prison.

This constant fear of being found out combined with the pressure of breaking the Enigma code is what Turing had to deal with. It seems barbaric now; it’s almost unthinkable, to be put in prison for how you were wired at birth. In the film, we see the formative events of Turing’s life: a first love, an attempt at fitting into straight society where he could not, and his final years as a reclusive inventor. Throughout it all, we are captivated by Turing’s struggle to maintain his credibility and his secret, with precious few people knowing anything about it. 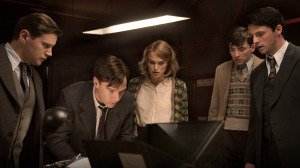 Benedict Cumberbatch, as the man caught in a pot full of near-boiling water, gives one of the year’s finest performances as Alan Turing, bringing to bear his outward and inward conflict in subtle shades on his face and his movements. Most notable are the scenes in Turing’s later years, where Cumberbatch breaks our hearts with his portrayal of a man caught between his life and the law; the gravity of his situation is not easy to show, yet he carries it off with a sublime air and soul. Keira Knightley digs her teeth into Clarke, grittily standing by Turing and being an exceptional female character, in that she’s not cowed by the male-dominated army and that she can do her job as competently as any man. She helps Turing play the titular “imitation game,” and she genuinely cares for him, making their ending all the more devastating.

The Imitation Game can be seen as a historical drama or a cautionary tale. Men like Alan Turing and Oscar Wilde, both creative geniuses and talented men, were prosecuted under the Criminal Law Amendment Act’s Section 11, with one result: stifling all further output. Imagine if we never placed a heavy value on what went on in other people’s bedrooms, instead placing value on what these people contributed to the world. Unfortunately, in this case, we’ll never know. The Imitation Game is a thought-provoking, stunning, deeply affecting film with heavy warnings to not repeat the mistakes of the past. Only time can tell if we’ll listen.