Alive Inside: A Story of Music & Memory

Posted by Michael Parsons on July 24, 2014 in Movie Reviews / No Comments

Cohen’s crusade to provide a connection to the soul — a veritable time machine through which patients can reconnect with their forgotten pasts — shows almost miraculous results that haven’t been achievable with most traditional medicines. Rossato-Bennett’s film feels a bit closer to a promo piece than a documentary, but it’s inspiring all the same. 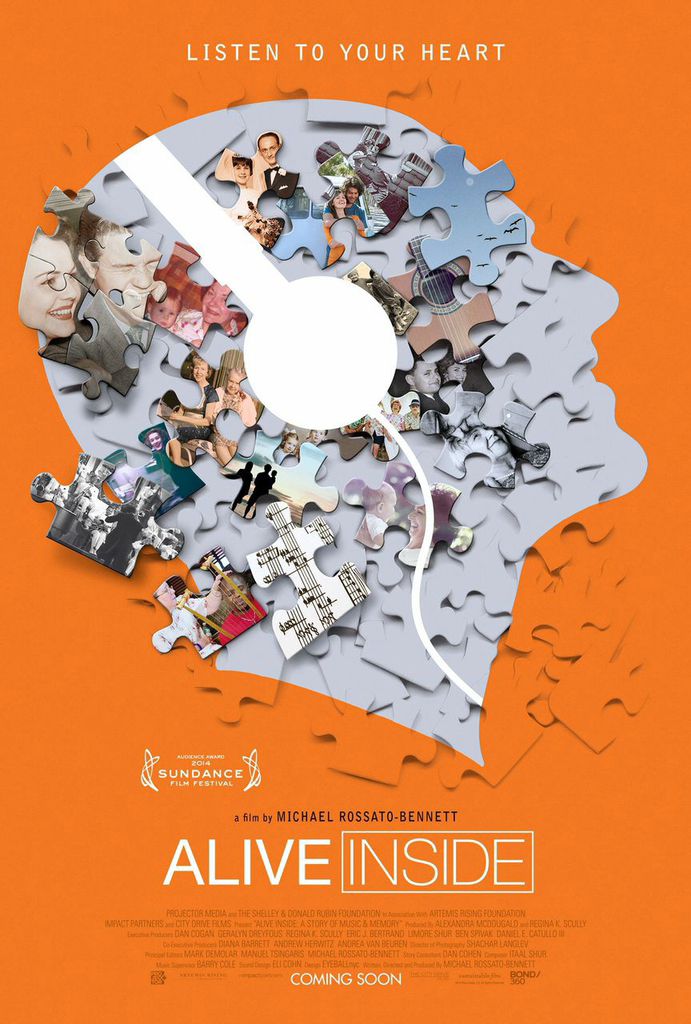 As someone who’s seen Alzheimer’s in his family, I wondered what the downside to this treatment could be. Cohen’s approach presents no side effects — unless you count excessively wistful affection, something we see plenty of in this film — and requires relatively little money, something we see few facilities willing to spend. From a fiscal standpoint, the bean-counters could view it as a simple in-room amenity like a TV or a clock. But it proves a tricky sell for Cohen in the medical world, because let’s face it, the money’s in the pills.

“What we’re spending on drugs that mostly don’t work dwarfs what it would take to deliver personalized music to every nursing home resident in America”, says Gerontologist Dr. Bill Thomas, founder of a non-profit organization called The Eden Alternative.

In other words, a $40 iPod could replace mounds of ineffective medications that often times do nothing but stifle the patient’s ability to communicate. Instead of suppressing emotions, Cohen draws out memories that the patient closely associates with a song in order to begin a dialogue.

Things have grown more favorable for Cohen, since Music & Memory is now in 424 facilities nationwide. The film started when Rossato-Bennett, who involves himself frequently and sometimes unnecessarily via narration, was asked to follow Cohen for a single day and document his findings. Success with a ninety-year-old Alzheimer’s patient named Henry, whose fire was suddenly re-ignited after listening to Cab Calloway, spawned a three-year project.

We see a lot of similar successes along the way, though Cohen meets with plenty of opposition from the system. The film asks us to consider who we’d be without our memories, as it covers the rudimentary science of our brains; more urgently it addresses the increasingly strained state of our elderly care facilities. As a criticism of our healthcare system, it’s nothing particularly groundbreaking, but in its depiction of minds blossoming back to life, “Alive Inside” is deeply affecting and rewarding. In between, we get a bit of history: Dr. Thomas describes the genesis of nursing homes as a “shotgun marriage between the poorhouse and the hospital”, as many aging people couldn’t afford health care before Medicare was introduced in the mid ’60s.

(Here’s an unsettling fact, according to one of the film’s contributing experts. In the next ten years, the number of Alzheimer’s patients, now roughly five million, will double, and the number of geriatricians, currently around 6,000, will decrease. Not good news for my generation. A presentation at a Long-Term Care Conference puts it into perspective: If a scale of the population over the last 12,000 years resembles something of a pyramid, with the youngest at the bottom and the oldest at the top, then it is rapidly flattening out, and will be inverted by somewhere around 2050).

Cohen’s therapy is not limited to those with Alzheimer’s. He also uses it on a younger man who suffers from multiple sclerosis and a severe bipolar schizophrenic named Denise, who bursts forth from the throes of despair to cut a rug after getting a dose of some favorite tunes from her youth. Denise later bonds with Musicians for World Harmony founder Samite Mulondo, a former Ugandan refugee who shares perspective from the non-medical side of things as a musician and humanitarian.

As prominent author/neurologist Oliver Sacks tells us, and which musician Bobby McFerrin later demonstrates, “music is inseparable from emotion”. It records itself in our bodies and emotions at an early age, and is the last part of the brain to be affected by Alzheimer’s. As a testament to the importance and effectiveness of Cohen’s work, I think “Alive Inside” captures that essence pretty well.