Posted by Michael Parsons on February 3, 2014 in Movie Reviews / No Comments

For an adult comedy – and by that, I only mean that it’s R-rated – “That Awkward Moment” gives such a ludicrously out-of-touch perspective on twentysomething dating life that only those who haven’t yet reached the drinking age will find the film amusing. 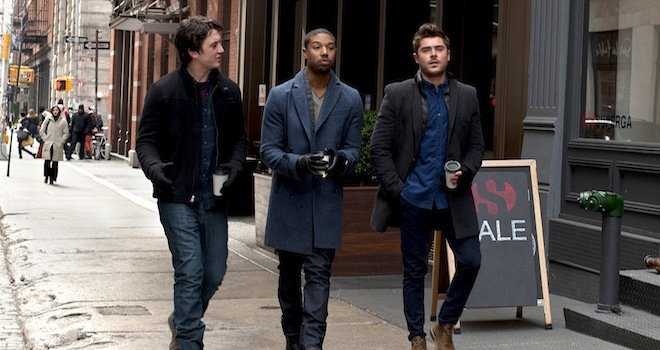 Three buddies – Jason (Zac Efron), Mikey (Michael B. Jordan) and Daniel (Miles Teller) – pledge to remain single as they navigate the hookup scene in New York City’s East Village. For Jason and Daniel, it’s all about building a respectable ‘roster’  – that being a rotation of girls with whom they have casual sex but are able to maintain a safe emotional distance. Women are lining up in droves to be seduced by these silver-tongued lotharios, who seem infinitely wise as to what they want. But as soon as one of their conquests asks where the relationship is going, you’d think these guys had just suffered blunt-force trauma to the head, suddenly unable to form complete sentences.

Things are a little different for Mikey, who’s recently been separated and is trying to figure out whether he should get back out on the dating scene or mend things with his ex (Jessica Lucas, 2013’s “Evil Dead”). Mostly, he just seems disinterested in being in the movie, and if you’ve seen Michael B. Jordan’s thoroughly moving performance in last year’s “Fruitvale Station”, you’ll probably understand why. One of his comic highlights is a scene in which Mikey emerges from the bathroom after having an intimate moment with himself – I’ll just say that bronzer plays a key role – giving his friends an opportunity to rattle off some not-so-clever penis-related analogies that are like throwaway ideas from a Judd Apatow movie (and if that’s not enough for you, there are plenty more during the outtake reel at the end credits. Apparently, there was some improv going on there – no need to stick around for that). 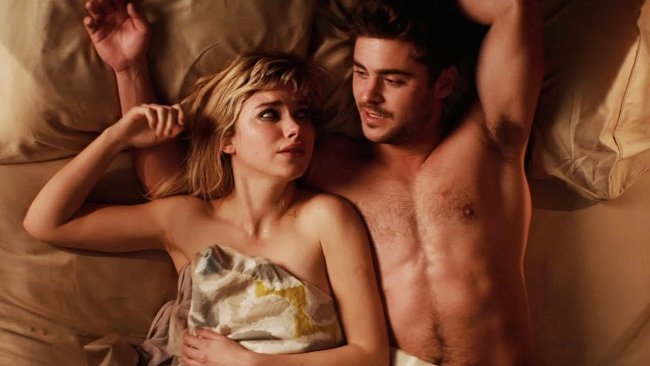 Laughs are sparse, but the film’s biggest problem is that it treats every played-out plot point like some profound revelation about dating. Really, it’s like they’ve created a composite of the most typically exaggerated  negative traits of both sexes; the guys are shallow, meat-headed commitaphobes  and the women are needy, relationship hungry leeches whose primary objective is to infiltrate the sanctum of bachelorhood (at least, that’s how these guys perceive them). With the exception of Jordan, the script doesn’t allow the actors to deviate too far from those descriptions, so Efron (the upcoming comedy “Neighbors”) and Teller (who was relatively charming in “The Spectacular Now”, but his being typecast as a ladies’ man is perplexing to me) aren’t so much to blame.

The lengths that these characters will go to avoid the dreaded “boyfriend” stamp are not only preposterous, they’re downright deplorable.  Jason, who begins falling for beautiful, whip-smart Ellie (Imogen Poots, “The Look of Love”), mistakes her for a hooker after sleeping with her the first time, and later shows up at a party with a completely inappropriate costume (he walks around amidst people in tuxedos and cocktail dresses looking confused for a good minute before deciding he’d misunderstood what “dress up” meant, but not before being introduced to Ellie’s parents), not to mention purposefully missing a funeral because he thinks that being there for Ellie in her time of need would automatically condemn him to exclusivity. He is so self-involved and obtuse that by the time he realizes that a relationship might not be the emasculating experience he’s built it up to be, it’s like a caveman discovering fire. What’s more ridiculous is how quick Ellie is to forgive him after a couple of pathetic, half-baked apologies – it diminishes her intelligence substantially.

There’s very little in “That Awkward Moment” that we haven’t seen countless times before, and done far better. First time writer/director Tom Gormican works tirelessly to retread every clichéd predicament a guy could face in this type of film; most of the gags are shoehorned into the storyline and rarely work. Of course, the majority of these situations are born of their own ignorance, playing out as if the characters were a good decade younger than they’re supposed to be, with the lack of maturity to boot.  There’s no air of sweetness like, say, the “American Pie” films, to temper the superficial nature of our core characters, who don’t even seem to care about each other much beyond their bar scene and video games. If it’s true that you spend your thirties fixing all the stupid mistakes you made  your twenties, these guys have a pretty busy decade ahead of them.