A Fantastic Fear of Everything

Posted by Eddie Pasa on February 7, 2014 in Movie Reviews / No Comments

Full disclosure: I’m an unabashed Simon Pegg fan. I have been since Shaun of the Dead, and I’m not going to stop anytime soon. That being said, when I tell you that he is the only good reason to lay your eyes upon A Fantastic Fear of Everything, don’t take it lightly. Pegg puts forth a brilliant performance as a paranoid delusional writer, and writer/director Crispian Mills has given him a lot of funny business to make us laugh, which is mostly reason enough to watch this film. However, the film is constantly battling with itself to establish an identity; does it want to be a comedy or to take us on an almost-Requiem for a Dream-type journey through a paranoiac’s consciousness?

Here are the facts: author Jack Nibe (Pegg) has turned into a demented recluse after working on a battery of screenplays for a television project called “Decades of Death.” Their subject? Mass murderers. It’s established that Jack tends to sink his whole being into whatever he writes and become obsessed with his subjects, so it’s no surprise that writing about murderers puts him through the roof. Sleeping very little, not tending to personal hygiene, and constantly concerned that someone is trying to kill him, Jack is barely even a shell of a man, scarcely functioning as a human being. For much of the movie, we spend time in his horrible, agoraphobic fantasy world, where the shadows come out to prey on him and footsteps in the hallway turn into full-on specters in his mind. Walking around with a kitchen knife for protection, Jack prowls about his darkened flat looking for intruders and rejoicing at even getting so much as an hour’s rest. 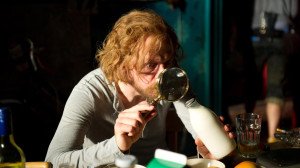 Eventually, he is put in a position by his literary agent Claire (Clare Higgins) to venture outside for a meeting with a bigwig from the television network for whom he’s writing “Decades of Death.” Encouraged by his old friend and therapist Dr. Friedkin (Paul Freeman… are we noticing a pattern here?), he makes his way to a place he’s been dreading since he was a little child: the launderette. Or laundromat, if that’s your preference. We are given, in no uncertain terms, the reason why he fears the launderette, but does he have a reason to fear this trip?

Basically, that’s what this whole movie is building toward – a trip outside. One would expect his reaction to being outside to be a bit more like Sigourney Weaver’s character in Copycat, where her fear of the outdoors is absolutely debilitating to the point of hallucination and nausea, but it just turns out that Jack’s a relatively normal guy on the outside. Of course, there are his nervous tics and his constant belief that everything around him is happening because of him, but that’s fairly usual. There’s nothing really very odd about Jack at all, except for when he’s in his flat.

That’s where the trouble with A Fantastic Fear of Everything has me shaking my head. What, exactly, are the makers of this film trying to say? Are they telling us that you have to go to the root of all your problems before your life can get any better? Or are they just trying to make a modern-day Jerry Lewis movie? You know, the kind with the star acting manic and insane with little else to make us remember much of anything? While Pegg does perform admirably, the script’s shortcomings and shoehorned third act trip the movie up and nearly make it fall flat. The twist comes screaming out of nowhere and doesn’t feel satisfactory at all, even after the climax has come and gone and the happy-happy epilogue plays out. It simply is a case of A Fantastic Fear of Everything trying to do too much and probably succeeding a little less than half the time.