Posted by Eddie Pasa on January 24, 2014 in Movie Reviews / No Comments

Writer’s block is a funny thing. It’s the kind of thing that makes my carpal tunnel aches flare up with how many times I have to push the “delete” button on what I’ve just written. Here’s why: writing about the delicate plot machinations of The Best Offer will ultimately spoil the movie for you, and I’m trying like hell not to do that. A recent critique of my essays told me that I tend to write about the superficial, focusing only on the supposed enjoyment of a movie, only occasionally delving into the true meaning behind films or their underlying themes or messages. And if I choose to write about the underlying messages of The Best Offer, again, I’d be spoiling it for you. But here’s what I can tell you…

Just about everything you see in The Best Offer has been seen before. You may see the plot twist speeding straight at you like an SR-71 on a bombing run, and you may be able to guess what’s going to happen and when it’s going to happen. All too often, dramas of this ilk are bogged down with their own bloated weight, with longing looks at an actor’s face or actions that have no effect further down the film’s road. Yet The Best Offer, despite its semi-unoriginality, manages to keep the viewer wondering what each character is going to do next, especially the film’s protagonist, Virgil Oldman (Geoffrey Rush). 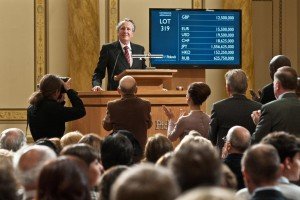 As head of a high-end international auction house, Oldman oversees evaluations and auctions concerning estates, art, and antiques. Self-possessed and a little eccentric, Oldman is the type of person who only deals with people because he has to, shunning any meaningful interaction with others and generally giving the world the cold shoulder, even when they’re being nice to him. Oldman’s latest job, the evaluation of the valuable content in an abandoned villa, has brought him more headaches than relief; the villa’s owner, Claire Ibbetson (Sylvia Hoeks) is an unseen figure, wasting Oldman’s time with missed meetings and frantic phone calls. When we finally find out the mystery of the reclusive Claire, Oldman (with us right alongside him) is immediately drawn into her life and how it works. Giuseppe Tornatore’s script and direction lead us into peaks and valleys of frustration and delight as Oldman insinuates himself further into Claire’s realm of seclusion, at first for monetary gain, but soon turning into something more deep and personal.

Tornatore has fashioned an almost standard, boilerplate story of a love found in the strangest of places between diametrically opposite people, and how trust may lead to betrayal. However, at every turn, Tornatore masterfully keeps the pace lively, never overstaying or showing his hand until the final reveal. Even then, we’re left in slack-jawed bewilderment as the last frames tick by like the gears of a watch. Ennio Morricone’s beautifully haunting score reverberates soundly through the film, becoming a spectral secondary character in the onscreen happenings, captured so well by cinematographer Fabio Zamarion. The shadows and light that Zamarion toys with in the film highlight the film’s theme of being slowly pulled out of one’s shell and into the bright world. Combining this behind-the-camera magic with strong performances by Rush and Hoeks equals a deft, snappy drama with the most minimum of drag.

There are very few drama films which make me feel on edge, hanging myself on every subsequent move that a character may make; either the story is entirely too predictable or boring. Not the case with The Best Offer – in fact, I’d say that it’s one of the few films that I can say actively engaged me and left me almost agonizing over where the story was going, albeit in a good way. You hope for and want the best for Oldman, as he gradually shelves his snooty self in favor of a more caring, loving persona. How he gets there? That’s the fun part. The Best Offer is a quick-moving, fascinating trip into the hearts of the weary and lonely, exposing all the joys and pitfalls of rediscovering humanity.