The Wolf of Wall Street

Posted by Michael Parsons on December 24, 2013 in Movie Reviews / 1 Comment

When you think about Leonardo DiCaprio and Martin Scorsese, levity probably isn’t the first thing to pop into your head. But their fifth collaboration, “The Wolf of Wall Street”, might just be the most ambitious, altogether outrageous comedy of recent memory, even if it’s not exactly the best film of the year. 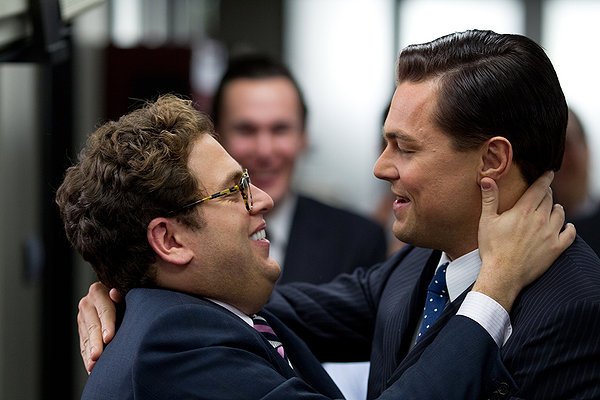 “Wolf” hews closely to the insane memoirs of corrupt stock broker Jordan Belfort (DiCaprio), assuming there’s so much truth to it, as he swindles his way into an obscenely lavish lifestyle full of drugs, hookers and expensive toys. In the late ’80s, he begins as a typical 22-year-old newbie learning the ropes at a big firm, where his boss (Matthew McConaughey) imparts upon him the rules of making money on Wall Street (“you take the money from his pocket and put it in yours”, is the gist of his cocaine and martini enhanced discourse).

His career prematurely but only briefly derailed by Black Monday (the infamous stock market crash of 1987), Jordan assembles a rag-tag group of traders-to-be and starts his own company pushing penny stocks to gullible people from an abandoned auto shop in a strip mall with righthand man Donnie Azoff (Jonah Hill), a guy he’s recruited from a diner (I got “Boiler Room” meets “Dodgeball” from this particular scenario). 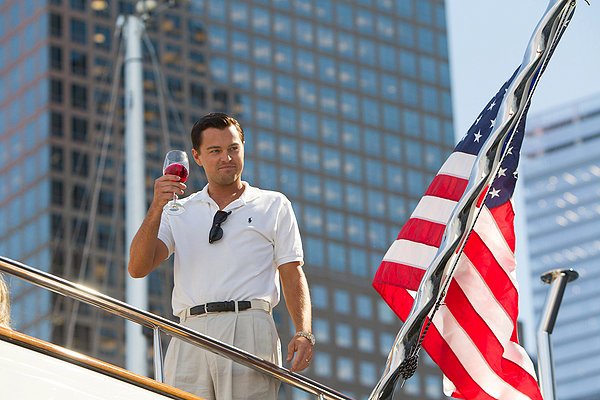 Channeling the wisdom of “Dallas Buyer’s Club” star McConaughey, whose few minutes on-screen are hilarious to the point of brilliance, DiCaprio’s Belfort builds an army of miscreant brokers who are so out of control with their libido and drug addiction that a “no intercourse” sign needs to be posted in the office restrooms. DiCaprio’s narration, initially reminiscent of Ray Liotta in Scorsese’s 1990 mobster masterpiece “Goodfellas”, is our intermittent tour guide through the madness of his lifestyle, which might befit a much crazier, more mean-spirited version of “Animal House” before eventually going all the way down the rabbit hole. Midget tossing, which we’re given a taste of at the beginning of the film, is a good meter for the mentality of our unruly collaborative. But that’s nothing compared to what’s in store, though I don’t mean to diminish the plight of little people being propelled at velcro targets by coke-addled stock brokers. You’ll learn what distinguishes a top-tier prostitute from a cheap one, and you’ll get a history lesson on the Quaalude and its eventual extinction (there’s a lengthy but excruciatingly funny scene demonstrating what happens when you take too many of those) which, among many, many other things (including the sinking of a yacht by rogue wave), are a few of the film’s most outlandish moments.

“The Wolf of Wall Street” is not entirely without a moral compass. When an FBI investigation led by Agent Denham (a scarce but always appealing Kyle Chandler, playing about the only straight arrow in the whole film) seems the most obvious and imminent threat, Belfort’s own hubris takes the reigns, and even when he can avoid potential prosecution simply by resigning his post as CEO, he stands his ground like a stubborn ten-year-old. The outcome is no surprise, but the route getting there – including his escalating problems with his beautiful, strong-willed wife (the scintillating Margot Robbie) and dealings with a slippery banker in Switzerland (Jean Dujardin, the guy from 2011’s “The Artist”) – is the only thing that seems to interest Scorsese, who is as indulgent as his characters in this rambunctious three-hour-long behemoth.

This is the second film that DiCaprio has starred in this year that’s concerned with conspicuous excess, the first being Baz Luhrmann’s surreal adaptation of “The Great Gatsby”, which sparkled with glitz, glamour and ultimately, a grand, romantic display. “The Wolf of Wall Street”, however, is the antithesis of that fantastical, luminescent epic, progressing from curiously blunt biopic to an exercise in outright absurdity (the two films share a similar tip-of-the-glass and wink kind of moment, only with an entirely different glint in DiCaprio’s eye), and  tends to focus more on the graphic details of Belfort’s shenanigans than emotional depth. Scripted by HBO’s “Boardwalk Empire” creator and frequent contributor Terence Winter, the film is often sneaky in how funny it is because it’s not always obvious when trying it’s to be; it’s just as frequently dark and unsettling. I certainly won’t be the first –  or even hundredth – to wonder how it dodged the dreaded NC-17 rating, based solely on all the debauchery that it depicts. But it’s undeniable fun to watch DiCaprio’s Belfort self-destructing, until we’re finally pulled back into the harsh reality of it all. Last week, I described another rather comical film based on a true story about a financial swindle – “American Hustle” – as hyperkinetic and sometimes unwieldy. Multiply that by ten and it might halfway prepare you for the insanity that is “Wolf of Wall Street” – it is unquestionably Scorsese’s most off-the-wall crazy effort to date.