Posted by Eddie Pasa on December 24, 2013 in Movie Reviews / No Comments

Technology has us in a stranglehold. It’s no secret that we seem to be better communicators online than in person these days – our discourse seems rife with “Did you see my Facebook post?” or “I put it on Twitter last week, didn’t you see it?” And because online communication is pushing us further and further into our own echo chambers, it’s no surprise that a plot line like the one found in Spike Jonze’s Her would seem plausible and entirely possible in this day and age. 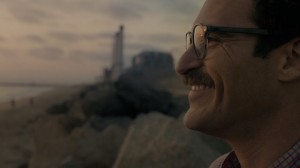 Meet Theodore Twombly (Joaquin Phoenix), a man more at home in the computer world than he is with flesh-and-blood people. He spends his days as a proxy writer, composing moving, gorgeous letters for other people filled with such love and soul that the words practically wrap their arms around you and envelop you in their embrace. The trouble is that he can’t seem to find that kind of romance for himself after his wife Catherine (Rooney Mara) leaves him.

On a walk home, he discovers OS1, a new computer operating system driven by artificial intelligence, capable of conversation and actual thought. Having purchased it and set up in his home, he quickly develops a friendship with the operating system’s “voice,” a girl named Samantha (Scarlett Johansson). Soon integrated into his work computer, his phone, and then his life, Samantha becomes the buddy that Theodore seems to have always wanted – someone who’s there for him and doesn’t let him down. More and more, Samantha is treated like a real person by Theodore, and they soon find themselves in an odd situation as they fall in love with each other. 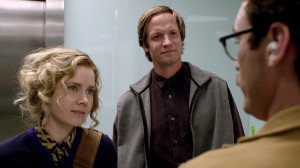 Her speaks to the loneliness that drives us towards the connection we all want, to have the perfect mate and friend. What it also says is that it may not be the connection we need. Writer/director Spike Jonze, known most notably for his offbeat takes on the world (Being John Malkovich, Adaptation, and his many famous music videos), knocks it out of the park again with his originality and sense of humanity. Antithetical to the awards fodder that circulates around this time of year, Her strikes notes of grace and power, all the while staying a little wonderfully wobbly when it comes to being straightforward.

Is it a statement on where we’re going and how we need to reconnect offline? Quite possibly. We’re slowly getting entrenched in our own worlds, customizing our needs and wants and eliminating the mistakes, making our lives convenient and stress-free. Theodore is seen walking into his apartment, with his lights turning on and settings being adjusted without even so much as flipping a light switch. And Samantha is a part of that convenience – well, at least she starts out that way. She reorganizes his life from the inside out and makes him be a better person. 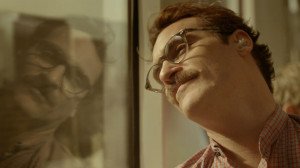 But here’s the irony of Her – it’s a total role reversal. Theodore functions almost the way a computer does: he’s turned on in the morning, he does what he needs to do for work, he goes home, and he turns off at night. Samantha, the artificially intelligent computer program, starts learning to be human, poring over books, studying music, learning behavior and how to interface well with others. In other words, she’s the one growing, not Theodore. We all think that it’s Theodore who needs a friend, when it’s really the other way around.

This film doesn’t make this kind of relationship look easy, as Theodore is the only living, breathing person of the two. Samantha can’t be physically intimate with him or make him a cup of coffee, nor can she hold his hand while looking at a sunset. However, Jonze’s script and direction coupled with bold performances by both Phoenix and Johansson make it feel completely right, as we finally see the lyrics of Zapp’s “Computer Love” brought to distinct life. Her is a movie unlike any other you’ll see – it may be fiction, it may be prescient, it may just be another one of Spike Jonze’s whimsical ideas made corporeal. Whatever it is, consider it one of my top 3 of 2013.