Posted by Michael Parsons on December 2, 2013 in Movie Reviews / No Comments

When Didier (Johan Heldenbergh) and Elise (Veerle Baetens) first meet, it’s love at first sight. He strolls into her tattoo parlor, curious about her extensive body art, and she explains bluntly that most of them are there to cover up the names of several of her ex-lovers. He laughs, makes a couple of remarks, and then shares that he has an affinity for American culture and, more specifically, bluegrass music. “It’s country music in its purist form”, says the scruffy musician. 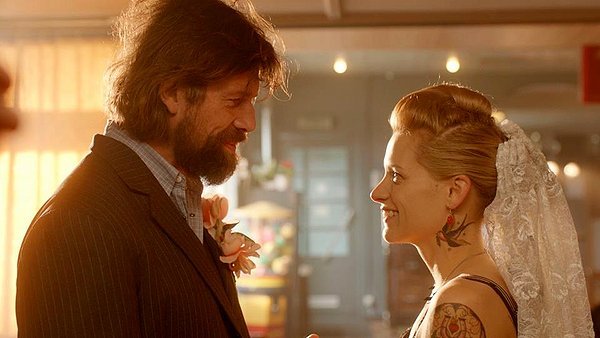 In this scene, one might ascertain that Didier is at once passionate and cynical, sensitive and stubborn. And Elise, whose “cover-ups” would suggest an almost naive spontaneity, is spiritual, unpredictable and brutally honest. Both of them, in this moment, are happy – it’s that fleeting space in time when a person realizes that they’ve met their soul mate.

Had this been the opening scene of Felix Van Groeningen’s transformative but tragic Belgian love story “The Broken Circle Breakdown”, the film might have looked like the beginning of a romantic drama where the characters experience the typical ups and downs that go along with being in a relationship. As it comes along over halfway through the film, however, the sequence hits like an emotional freight train.

The film begins several years later as Didier and Elise, who perform together in a bluegrass band, struggle to cope while their seven-year-old daughter Maybelle (played by newcomer Nell Cattrysse) is undergoing chemotherapy treatment.  We are introduced to them as worn down individuals who’ve just about exhausted their positivity and begin to deal with uncertainty in very different ways. 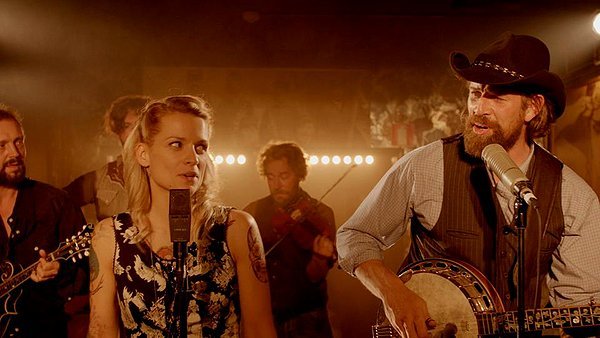 The film dips in and out of their happier, more carefree years frolicking in a bucolic property in the Belgian countryside that would eventually become their home, and so develops into an incredibly poignant piece that intermittently breaks from its heavy subject matter to tell a deeply moving love story. With their crisis being foreshadowed, the film creates an unusual, bitter-sweet tone, shifting between a life of endless possibility, ethereal like a fairy tale, and one of limited options, dwindling faith and difficult questions. Van Groeningen’s nonlinear telling shows a stark contrast between the couple as new lovers and later as grief-stricken parents, as the story unfolds as if one were to open a book in the middle and start reading in opposite directions. The director pulls off a tricky rhythm, using the band and its music as an anchor for Didier and Elise’s fragmented story, with the fast, twangy riffs of bluegrass lending an unusual energy to the film. “Breakdown” is something that could, or perhaps should, have been a bit confusing, if not thoroughly depressing, but there’s something indescribably honest about it that, at least for me, resonated for days.

“The Broken Circle Breakdown” is a masterpiece that, while far from being ambiguous in its conclusion, is sure to speak to people in very different ways. This enthralling, fragile, often harrowing Belgian drama ponders life, death, and the obscurity of everything in between with a rare sensitivity and depth. It is perhaps the most expressive, soulful, emotionally challenging film I’ve seen so far this year, with Heldenbergh (who wrote the play from which Groeningen adapted the screenplay) and Baetens giving absolutely unforgettable performances. “Broken Circle Breakdown” isn’t just the best foreign language film of 2013 – it’s one of the year’s best period.