Posted by Michael Parsons on November 26, 2013 in Movie Reviews / No Comments

Note: This is a spoiler free review of “Oldboy”.

Spike Lee’s remake of the 2003 Korean film “Oldboy” is a visually alluring blend of noir thriller, action flick and “Twilight Zone” episode, but it lacks the discipline to keep all these components from getting in the way of one another as it transitions from creepy, cerebral whodunnit to cartoonishly bloody revenge flick. Uneven and often illogical, the screenplay from Mark Protosevich (“I Am Legend”) is determined to make it all work nonetheless, and with little left to the imagination. This is problematic, because it makes the gaping plot holes more evident and the twists less effective than they were surely intended to be. Having not seen director Park Chan-wook’s (“Stoker”) original film, nor having had any portion of it spoiled for me, I figured that, as a fan of intelligent, mind-bending plots, I pretty well represented Lee’s target audience. But even for someone going into it cold, “Oldboy” ended up being more of a guilty pleasure than the clever psychological nail-biter I expected. 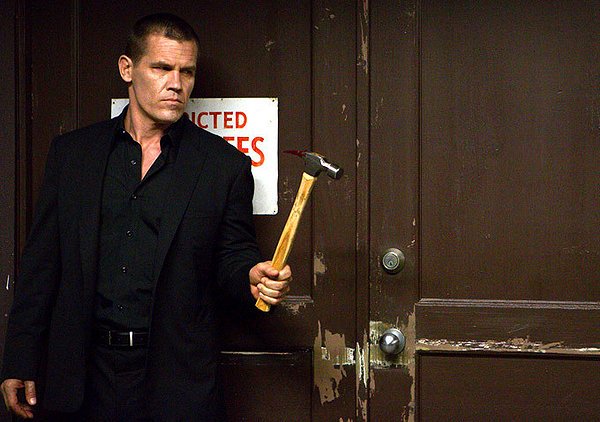 The film promptly establishes its focal character as a degenerate who’s made plenty of enemies. Joe Doucett (Josh Brolin) is a shameless, womanizing alcoholic who works for an advertising agency. He’s a neglectful father and a chauvinist, forgetting his 3-year-old daughter’s birthday and making a drunken pass at the wife of an important client. For Joe, it’s a day seemingly like any other as he roams the streets intoxicated, mumbling to himself in what would appear to be a downward spiral of self-sabotage.

After being turned away from his favorite watering hole by his childhood friend Chucky (Michael Imperioli), Joe encounters a mysterious woman in the street. When he wakes up in a motel room the next morning, he assumes that he’d gotten lucky during last night’s stupor. But there’s no woman there, and when he tries to leave, Joe realizes that he’s been sealed in. There are no windows, no telephone. An old television set, a bed, some really creepy motel art and a few books are the extent of the room’s furnishings.

Days pass, then weeks, then months. Every morning, Joe is brought Chinese takeout and a pint of vodka. Watching the only news channel available, Joe discovers that his ex-wife has been brutally raped and murdered and that he is the prime suspect. His daughter Mia gets adopted by a couple that he sees being interviewed on a schlocky investigative program. Years pass, and Joe writes countless letters to her that he cannot mail, begging her forgiveness for his transgressions as a father but proclaiming his innocence for her mother’s murder. Resolved to bettering himself for some possible future outside of his prison, Joe quits drinking and begins working out. He practices martial arts by watching movies. 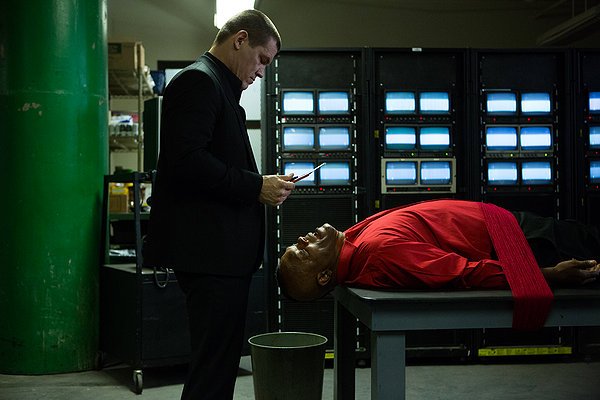 After 20 years, Joe is released without explanation. He wakes up in a footlocker in the middle of field, well-groomed with an envelope of cash and a cell phone. The obvious and looming question is, why? “Oldboy” moves briskly until it ultimately gets bogged down in the answers, walking us through it like parents having the big ‘sex talk’ with their kids.

As Joe seeks to identify and exact revenge upon his captors and make contact with Mia, who is now a young woman, he leaves countless bodies in his wake (the first of which are several poor bastards on a high school football team), crossing paths with a medic (Elizabeth Olsen, the moral center of the film) who helps him in his search. After tracking down a key player in his abduction (Samuel L. Jackson in a scene bound to make even those with cast-iron fortitudes gag), Joe takes on an entire syndicate of bad guys; in one sequence, he dispatches dozens of assailants, none of whom can seem to get their hands on anything more deadly than a 2 x 4.

“Oldboy” is a mind-numbingly violent, mechanically paced movie, and as such detaches itself emotionally from the audience. If the first act is a moody, disquieting observation of  Joe’s metamorphosis, keeping us wondering where the intriguing plot is going to take us, then the rest of the film is boilerplate shock cinema that relieves us of the burden of caring. Entertaining enough as a diversion but clearly not for the squeamish, the film traverses numerous stomach-churning, often unthinkable scenarios with little consequence outside of the final revelation. It’s clever at times, but determined to explain itself. So there’s that big question again – why? Sharlto Copley’s villain, who feels so manufactured and over-the-top that he might as well be carrying around a white cat, eventually gives us the remaining pieces of that puzzle, but at this point it’s hard to take seriously despite the horrific nature of its theme. Perhaps the biggest surprise is that the film ends up being kind of predictable; this new “Oldboy” feels like either a missed opportunity or perhaps something that never should have been made in the first place.