Posted by Michael Parsons on November 7, 2013 in Movie Reviews / No Comments

Whether it’s the fried chicken at Breitbach’s country buffet in Balltown, Iowa, the southwestern-style stew at Tucson’s modest Mexican restaurant La Cocina De Gabby, or Grant Achatz’s latest feat of molecular-gastronomy at Chicago’s world-renowned Alinea, you’ll find a history of tradition and adversity behind it.  That’s the basis for Joseph Levy’s palatable documentary “Spinning Plates”, which splits its time between the owners of these three establishments as they share  stories about family, motivation and cuisine. 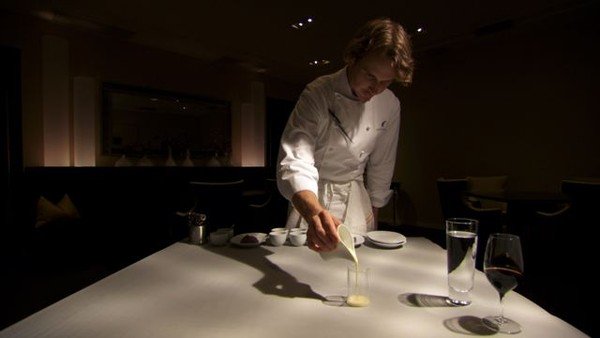 “We deal with the absurd”, says Achatz, referring to a twelve-hour, five-man  preparation for a single bite of food at Alinea, which is now the top-rated dining establishment in the United States according to its 3-star Michelin rating (the most coveted award in the business). The restaurant embodies, as Grant explains, “at once art, craft and science” – admittedly something I’d never tire of watching him demonstrate  (there’s a device that freezes olive oil into a lozenge upon contact at 50 degrees celsius, for example).

But the cuisine is really just a carrot, so to speak, as Levy is clearly more interested in illustrating the common thread between different sub-cultures and personalities than he is indulging foodies with close-ups of foie gras (and I swear I didn’t hear crème fraîche mentioned even once during the course of the film). In that regard, Levy wisely avoids resembling a “Top Chef” episode by limiting his time in the kitchen and allowing his participants to elaborate on their personal experiences, which range from health crisis to financial devastation to incredible acts of selflessness.

As it should, the tone changes considerably as the film shifts between its subjects. In Iowa, Mike and Cindy Breitbach are the center of their community; the restaurant had been in the family for 150 years when it burned down the first time, and upon being rebuilt – entirely through donated time, money and materials – was leveled by a second blaze only ten months later. Before that tragic moment, which remained a mystery to arson investigators according to the local paper, Breitbach’s Country Dining hadn’t changed one iota; several customers held keys to the establishment, and countless patrons volunteered their various skills on busy holidays.

For Francisco and Gabby Martinez, who have a three-year-old daughter, it’s imminent foreclosure on their home that keeps them working ridiculous hours. “We just need to work harder”, says a relentlessly optimistic Francisco. Much of the fare at La Cocina De Gabby consists of recipes passed down from Gabby’s mother, who she recalls through tears had to also be the man of the family to make sure they had a better life.

“Spinning Plates” is a thoughtful, elegantly crafted film, and though not as visually stunning as something like last year’s more food-centric “Jiro Dreams of Sushi” or as intimate as the revelatory bio-doc “Stories We Tell”, is pretty compelling. While it occasionally treads in the mundane, Levy seems to understand what makes his subjects tick, and perhaps more importantly, how to convey that to an audience.