Ladies and gentlemen, welcome to Phase II of the Marvel Cinematic Universe (MCU). We’re in a different territory here, folks; the notion of simple sequels no longer applies. Here, we have a living, breathing universe where superheroes fly in and out of each other’s lives as fast as a turning of the worlds. Events and people are connected by script references or actual cameo appearances, and the stories are interwoven to create a rich fabric which forms the basis for the Phase-ending Avengers films. Phase I was about assembling the Avengers team; Phase II seems to concern itself with everything happening after the Battle of New York, which was so well-documented by Joss Whedon’s 2012 blockbuster hit Marvel’s The Avengers.

Marvel kicked off Phase II this year with Iron Man Three and today’s release, Thor: The Dark World. Reuniting Chris Hemsworth as the titular god of thunder and Natalie Portman as scientist Jane Foster, Thor: The Dark World seems to be a logical next step in not only the cinematic Thor canon, but the MCU itself. If the first Thor movie was about the growing pains of an up-and-coming successor to the Asgard throne, this new one is about taking on a personal responsibility for keeping the universe safe, as Thor has come to realize. No longer the wily, impulsive man-boy of the first movie, Thor has stepped into his role as protector, hoping eventually to satisfy his father Odin (Anthony Hopkins) and take over rule of Asgard. Yet his thoughts are with the mortal Foster, having fallen in love with her and leaving her at the end of his first cinematic outing. In the midst of his yearning, a new evil has reared its head, as we follow Dark Elf Malekith (Christopher Eccleston) in his search for the Aether, a weapon that could change the light of the universe into total darkness. 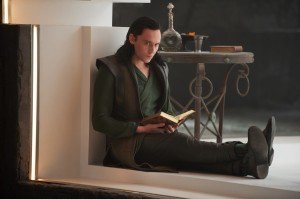 Having seen the first Thor in its entirety for the first time two days prior to my viewing of Thor: The Dark World, it was almost too easy to compare the differences between the two. Where the first film starts a little slow and builds wonderfully toward the middle and climax, Thor: The Dark World takes off running and doesn’t catch its breath until well into the movie. The whole thing moves along at a consistent pace, which almost negates a thrilling climax like you’d expect, but that’s a minor issue. What moves this film is the interplay between Thor and his counterparts, especially the rapport between him and Loki (Tom Hiddleston). Once again, Hiddleston steals the show as Thor’s ne’er-do-well half-brother, who’s been brought back to Asgard and prisoned for his crimes against humanity. However, a twist of events leaves Thor in need of Loki’s cunning and skill, requiring him to break Loki out of prison (which is one of the highlights of the movie).

Everyone’s given more to do in this new film, from comic relief Darcy (Kat Dennings) to faithful Bifröst bridgekeeper Heimdall (Idris Elba), as the movie’s focus in no longer solely on Thor. It’s more about how he moves through the worlds he swears to protect, and finally accepting his place in the grander scheme. Veteran TV director Alan Taylor’s film bubbles and squeaks along with all the requisite components of an entry into the modern MCU. At times, it feels a little too over-reliant on past glories, with the story barely being buoyant enough to differentiate it from its 2011 predecessor. No matter how middle-of-the-road Thor: The Dark World tends to feel, it is saved by its cast and the fun they had that gets left on the screen. Stick around for not just one, but two post-credit sequences.