Posted by Michael Parsons on September 12, 2013 in Movie Reviews / 1 Comment

Though it’s not nearly as terrifying as advertised, “You’re Next” is still an unrelenting, unapologetic thriller that turns the modern “home invasion” flick on its sadistic head. Centered on a wealthy family that is incredibly dysfunctional (to say the least), the film takes considerable time developing their unstable dynamic before hacking them to bits. I couldn’t help but recall the “Ten Little Indians”-esque TV series “Harper’s Island” during the first act, if only its sensibilities hewed a little closer to the slasher films of the ’70s and ’80s. And while the film risks undermining the horror element by bordering on parody in the final act, Simon Barrett’s confident and creative script reels you back in just in time to cold-cock you with something dreadful. Everything in between is just a  lot of sick, twisted fun. 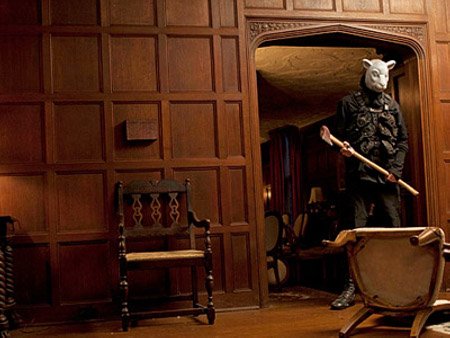 From the moment a couple is murdered in their remote wooded residence by a machete-wielding maniac wearing a creepy lamb mask, it’s clear we’re in for a respectable, old-school body count. The wealthy Davison clan owns a place not far away, a bucolic country manor where they’ve gathered with their grown kids to celebrate their 35th wedding anniversary (Rob Moran and Barbara Crampton are comically youthful in the roles of mom and dad – but I digress). It’s not long before the family’s incessant bickering at dinner is interrupted by unseen assailants with crossbows and all sorts of clever tricks up their sleeves.

After the first of many projectiles flies through the window and takes out dinner victim #1, a harmless yet cynical soul played by “Innkeepers” director Ti West (the film is a veritable who’s who of independent horror filmmaking talent), the group find themselves trapped with no communication to the outside world (cell phone jammers, we’re told). The family, also consisting of sons Felix (Nicholas Tucci), the belligerent Drake (Joe Swanberg) and the scholarly Crispian (AJ Bowen), also good-natured daughter Aimee (Amy Seimetz) and their surviving significant others, start getting picked off one by one and in increasingly gruesome ways. Naturally,  there are varying levels of panic and remorse, but Crispian’s Aussie girlfriend Erin (Sharni Vinson) has some strangely acute survival instincts that come in handy. 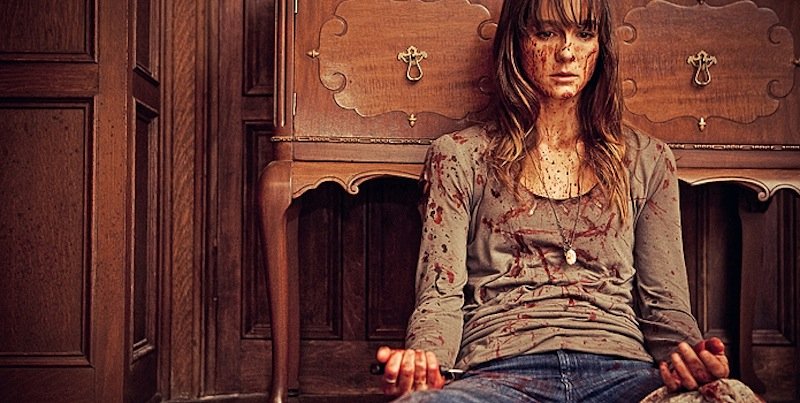 We learn quickly that bravery and cowardice are rewarded equally. One character makes a sacrifice to go get help and takes a piano wire to the jugular, another takes an axe to the head in a frantic attempt to escape. The motivation for the invasion is initially a mystery; after watching other films of the sub-genre, we’re inclined to assume that they’re just a group of sick maniacs out to satisfy a bloodlust (e.g. “The Strangers” and the far more disturbing “Funny Games”). It turns out that “You’re Next” doesn’t even belong in the same category. 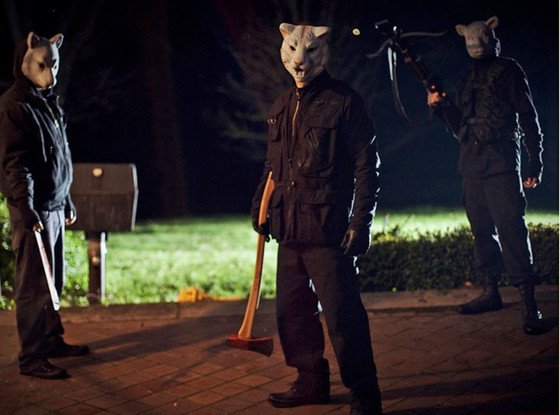 With nods to several retro influences and charged by a delightful ’80s synth-heavy score, the film refuses to play it straight but also manages never to get too campy. Harking back to genre benchmarks like “Friday the 13th”, infused with a pitch-black comic tone similar to that of “Cabin Fever”, and even shades of “High Tension”, “You’re Next” pays tribute to a broad spectrum of horror. It’s the type of off-kilter movie that typically doesn’t make it into such wide release (but we wish did). However, director Adam Wingard doesn’t seem like he’s trying to replicate anything in particular here, either because it’s derivative of so many films that it’s hard to discern which are the most influential or  because it’s so original that he’s already carved out a niche for himself.

Perhaps the best thing about the film, aside from the appropriately quirky characters, is that it doesn’t revel in that often unnecessary, drawn out brutality that pervades some of these “realistic” horror films. Sure, it’s as gory as the next slasher flick – death by blender might be a highlight here – but the style of the film keeps it out of the murk.

Written by Simon Barrett, who collaborated with Wingard on a segment in the “V/H/S 2” horror anthology and also with  Joe Swanberg on 2011‘s “Autoerotic” , “You’re Next” (in which Barrett also plays one of the attackers), is often smart, sometimes stupid, but always entertaining. And what was I saying about it not being as terrifying as they’re saying? The film sets up a ton of scary scenarios that often don’t reach their potential; most of the creepy scenes happen early on in the film in the blurred background à la the original “Halloween”. But as the film develops into a “First Blood” style actioner with the most formidable horror heroine in recent memory, you’ll likely forget that you were ever disappointed.