Money For Nothing: Inside The Federal Reserve

Posted by Eddie Pasa on September 13, 2013 in Movie Reviews / No Comments

“That ain’t workin’ – that’s the way you do it
Money for nothing and your chicks for free.”
— Dire Straits, “Money For Nothing”

This refrain from this 1985 pop music smash hit seems to be the guiding principle these days for the folks that run the USA’s financial institutions. No longer bastions of security and savings, banks have become a sort-of “evil empire” in America, with their influence reaching far into the lives of every man, woman, and child. They are painted as scapegoats for our current financial troubles, and it’s hard not to get mad at the stories that the media covers when a lot of them seem to be the same old song and dance – rich bankers continually manipulate the system, get bailed out when they fall into trouble of their own making, and then skate with the profits while the general public gets stuck with their cheese in the wind.

2010’s eye-opening documentary Inside Job (my review of which is here) focused on the banks and the deregulations that led to various financial crises of the late ‘00s; as an almost-spiritual brother to Inside Job, Jim Bruce’s Money For Nothing: Inside the Federal Reserve takes a look at the role that the United States Federal Reserve has had since its inception in 1913 up to the present day, including its role in our recent financial meltdowns. Narrated coolly by Liev Schreiber, Money For Nothing is an interview-driven lesson about economics in America. Always informative, albeit slightly dry and monotonous, Money For Nothing doesn’t waste any time as it takes us through the history of the Federal Reserve System (often referred to as “the Fed”), what it is supposed to do, and what it hasn’t done to help our citizens in financial turmoil. 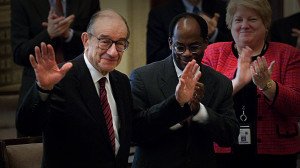 Much of what Bruce has to offer is pretty much a live-action Wikipedia entry; it’s the folks giving the interviews that provide the color and the meat of the film. Bruce has collected extremely knowledgeable subjects for his interviews, ranging from former Fed personnel to economists to financial publication editors, and all of them seem to have said the same thing: the Fed can no longer act the same way that it has been. Times and economies change, and the Fed either needs to change or get out of the way. Examples of the Fed’s callousness towards burgeoning financial calamities are given to show that people like Alan Greenspan and Ben Bernanke are horribly out of touch with the American people, seemingly stuck in an echo chamber and not listening to people pulling the fire alarm.

Where Inside Job dared to interview subjects on both sides of the financial issue (including some sneeringly apoplectic bankers who were obviously uncomfortable with being interviewed), Money For Nothing operates wholly in hindsight, with the only current player being a vice chair at the Federal Reserve, who winds up being apologetic and sympathetic to Joe Public’s plight. Bruce gets his subjects talking honestly and openly about the way that the Fed has been run, and be warned: it’ll make anger and enrage you. We are told stories about how Greenspan and Bernanke were basically asleep at the switch, acting in the interest of the banks and allowing things like the subprime mortgage crisis and the weakening of the dollar to happen on their shifts. Will we learn from the lessons taught by the recessions of 2007, 1990, and the Great Depression? It’s hard to tell, but Money For Nothing goes a long way toward shedding some light on the future. Both this film and Inside Job should be required viewing for all of America’s citizens, if only to help them understand exactly how they fit into the grand scheme of things.

Money For Nothing: Inside The Federal Reserve opens today in Washington, D.C. at the Landmark E Street Cinema.