A Midsummer’s Night With The Monkees

Posted by Eddie Pasa on July 22, 2013 in Concert Reviews / No Comments

“I’ve got something to tell you young kids… I was singing this long before Shrek, okay?!”

With that admonition by self-appointed frontman Micky Dolenz, the remaining members of The Monkees – Micky, Michael Nesmith, and Peter Tork – launched into their Neil Diamond-written megahit from 1966, “I’m a Believer,” enthralling audience members both young and old at the Warner Theatre in Washington, DC on Sunday night. 48 years after their formation as America’s first “boy band” in 1965, these three have embarked on an extension of their brief winter tour from last year – a sort-of memorial tour after suddenly losing the fourth Monkee, Davy Jones, to a heart attack on Leap Day. They stopped off in the nation’s capital this weekend to deliver some of their greatest hits (and some of their misses, as well), taking us down Nostalgia Lane for a lively set lasting just north of two hours.

Formed by Bob Rafelson and Bert Schneider in 1965, The Monkees were originally meant to lampoon the gigantic success of The Beatles (four good-looking young kids who play instruments and misspell their band name) for thirty minutes on primetime television. “The Monkees” ran for 58 episodes over two seasons; the majority of their shows involved some slapstick caper during which one or two musical numbers would be performed. Of course, the music would be made available at your local record shop, because The Monkees seemed to be nothing more than a huge marketing scheme. Here were four guys who sang songs that other people wrote for them, and they wouldn’t even have to play their own instruments on the albums! Their musical talent was overlooked by their creators and Don Kirshner, the man who would come to manage The Monkees and hire folks to write their music.

However, as time progressed, The Monkees grew into a real band, writing and performing their own music in studio and at concert appearances; their third album, “Headquarters,” still stands as one of their best records ever, and one of my own personal favorites of all time. With more depth and character than their bubblegum-pop tunes of their previous two albums, The Monkees’ self-penned music started garnering just as much acclaim as their non-original work. Both sets of tunes went on full display on Sunday night, with the trio giving every song their proper due and respect, whether it was written by someone else or a member of the band. Backed by seven musicians (two of which were Michael’s son Christian and Micky’s sister Coco), The Monkees took us on a mostly-chronological journey through their 1960s catalogue, accompanied interstitial video footage to tie it all together. 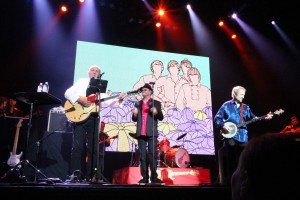 As the lights went down and the audience roared with anticipation, a video montage started up that showcased not just The Monkees and their television show, but also how their music has become so much of a part of Americana. Clips from other television shows like “Mad Men” and “The Brady Bunch” that used Monkees music (or featured a member or two) were shown interspersed with clips from their own show, finally culminating in “(Theme From) The Monkees” blaring out with the show’s recognizable opening credit montage. Micky, Michael, and Peter burst onstage with “Last Train to Clarksville” and kept the crowd rocking with favorites like “Your Auntie Grizelda,” “(I’m Not Your) Steppin’ Stone,” and “Mary, Mary” before cooling it down a notch with Peter singing Davy’s song “Early Morning Blues and Greens” from “Headquarters.” The show briefly lost a bit of momentum as each member took a turn singing their signature song from their film Head, eventually leading up to everyone leaving the stage while Davy’s Head showstopper “Daddy’s Song” played on the video screen in its entirety, which elicited a loud ovation from all in the room. Aside from this song and the aforementioned “Early Morning…”, “Daydream Believer” was the only other “Davy song” performed, as Micky stipulated that it was no longer their song to perform; “It belongs to you now,” he said to the audience, and handed the mic to one of their fans to sing it prior to the encore.

Each Monkee’s vocal and instrument proficiency took center stage, almost as if they’ve still got something to prove as a band, not just as actors and musicians put together for marketing purposes. As the energetic frontman, Micky doesn’t seem to have lost a step as far as working a crowd and entertaining a roomful of people, and he can still hit the high notes and provide solid tempos on the drums (which he played for about a quarter of the time). He maintained a personal and affable air, with his story explaining the song title “Randy Scouse Git” and its name-change in the UK to “Alternate Title” receiving peals of laughter from the audience. Armed with his detuned 12-string Gretsch Country Gentleman, Michael stayed mostly in his spot at stage right, still sounding as rich and pleasant as he did back then on tunes like “Papa Gene’s Blues” and “Listen to the Band.” Peter would alternate between guitar, bass, keyboards, and lead vocals, all the while leading the crowd in callbacks and hand-waving, finally bringing the house down with his recitation of fan favorite “Percival Patterson’s Pet Pig Porky.”

Throughout the night, the band peppered us with the zaniness that the casting directors wanted when they sought “4 insane boys” to fill the roles as The Monkees. Working from prepared shtick without losing any comedic zing, the men pulled pranks on each other, humorously vocalized Moog synthesizer parts over “Daily Nightly,” and playfully jabbed at each other as they celebrated their music and their legacy. An outtake reel from the television show was played during one set break; it was a treat to see the boys they once were, clowning around and goofing off with each other. I’ve always believed that the point of art is to help others see the world in a different light, or to help others deal with life as it is; since the band’s inception 47 years ago, The Monkees have continued to do just that through their comedy and their music. While time has already claimed one of their members, the spark they used to make America fall in love with them still shines brightly, no matter what their self-professed “manufactured image with no philosophies” may project.