Posted by Michael Parsons on June 20, 2013 in Movie Reviews / No Comments

“Hatchet III” might be hard for you to appreciate unless (A)you’re playing the over/under on the body count for monetary gain, (B)you’re a film student who wants a crash course on practical movie FX, or (C)you somehow didn’t get enough carnage in the first two films to satisfy your inner gorehound.

Yep, fans of the blossoming franchise (let’s face it, at installment #3, this type of series is still just a zygote) will be happy to know that the beheadings have easily doubled, there’s at least one poor bastard who has his skull ripped out through his sternum (though he was quite literally asking for it), and at least one pair of testicles are found slung over a tree branch like a pair of sneakers hanging from a telephone wire.

Still reading? If so, I suspect you probably belong in category “C”, and this review will just act as a reminder that the film is available now on iTunes (and now DVD). Off you go. 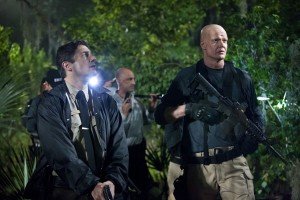 For the rest of you, allow me to further indulge your morbid curiosity about this ultra-violent cult phenomenon. 2006’s “Hatchet” was marketed as an “old school American horror” flick, and writer/director Adam Green hit the nail on the head with his blood-soaked, tongue-in-cheek tribute to the genre’s heyday – the 1980’s. The film introduced us to the newest seemingly death-proof horror icon, Victor Crowley (Kane Hodder), a deformed, hulking beast who wanders Louisiana’s Honey Island Swamp, tearing apart anyone who treads on his turf like they’re made out of paper mâché.

So what’s this guy’s beef? Well, Crowley is a ghost, for one. As a child, he took a hatchet to the face when his father was trying to break down a door to save him from a house fire that was inadvertently started by some local kids. A little black magic returned Crowley to life as an indestructible monster with perpetual ‘roid rage, hacking bodies in half and ripping out peoples’ spines with his bare hands like a homicidal WWE performer.

Of course, Green’s second entry, “Hatchet II” was inevitable based on the very nature of the “slasher” sub-genre, and though the series was already beginning to lose a little of its campy luster, he continued to make a statement by defying the trends of contemporary horror, answering only to the fans and not sparing an ounce of corn syrup (or a single corny line) in doing so. 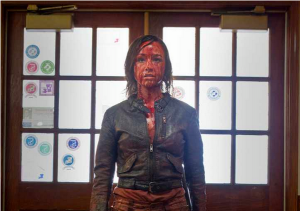 Technically no better or worse than it predecessors, which initially reminded me of a low-budget 1982 flick called “Madman”, “Hatchet III” is just more of the same blood and gore, ratcheted up so high that the series is now closer to being a parody than an homage (if it wasn’t already), with Green relinquishing the director’s chair to camera operator BJ McDonnell, who follows essentially the same formula: send ‘em into the swamp and Crowley will take ‘em out in increasingly gruesome, often comical ways.

With all three films taking place in roughly a 48 hour period, “III” picks up immediately where the last one left off, with Marybeth (Danielle Harris), the series mainstay (originally played by Tamara Feldman) leaving Crowley dead after a few close range shotgun blasts to the face. Of course, we know better. Later, we find out that each night, Crowley’s body returns to the form in which it was originally resurrected, a fitting explanation for his unusual resilience.

Exposition reminds us that Marybeth’s father was one of the kids responsible for setting fire to the Crowley house some forty years back (her search for dad in #1 turned into a quest for revenge in #2 after finding out he’d already been chopped into gator bait), and the only way to stop him is to deliver Papa Crowley’s ashes to Victor via the only remaining relative of the party responsible for his death – Marybeth. Too bad she’s in jail, detained for questioning about all the dead bodies in the swamp. 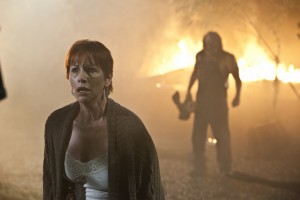 So it’s not much of a surprise when Crowley turns up no worse for wear, taking out a first response team in a montage of severed limbs and arterial spray before the entrails from the last film have even had time to cool. A  S.W.A.T. Team led by Hawes (Derek Mears), along with Sheriff Fowler (Zach Galligan of “Gremlins”, with an overemphasized southern drawl) is sent into the swamp to eradicate the menace with little attention being paid to Marybeth’s warnings – perhaps she’s difficult to understand amidst her never-ending barrage of angry F-bombs. In any case, their ammunition has little effect on Crowley, making the massacre in “Predator” look like a nice game of paintball.

“Hatchet III” isn’t meant to be particularly scary – it’s way too cartoonish for that. But it’s not particularly clever, either, missing the twisted humor of the first two. By now, the novelty has worn off, even if there are still plenty of new ways to disembowel someone (and I’m sure we’ll find out soon enough). The film’s biggest plus? Two guys who’ve played Jason Vorhees (Hodder from “Friday the 13th” VII – X and Mears from 2009’s remake) throwing down in the woods. I’ll let you guess who wins.