Posted by Michael Parsons on May 17, 2013 in Movie Reviews / No Comments

(This review was originally published on May 17, 2013 at Reel Film News)

You might recognize Michael Shannon as the psychotic super-villain General Zod in the trailer for Zack Snyder’s upcoming Superman reboot “Man of Steel”, but if you haven’t seen films like William Friedkin’s “Bug” and Jeff Nichols’ “Take Shelter”, you probably haven’t seen the full extent of his intensity as an actor.

In Ariel Vromen’s “The Iceman”, Shannon plays real-life hitman Richard Kuklinski, a mass murderer who managed to keep his profession a secret from his family until his arrest in 1986. Because the film doesn’t really delve into what makes him tick, Kuklinski could have come off as little more than Frankenstein with a handgun in the care of any other actor. But Shannon, being as enigmatic as he is physically imposing, pushes the boundaries of restraint to an excruciating degree as we get periodic glimpses through the cracks of his emotional dam. And when the levee breaks, his performance is deeply unsettling. 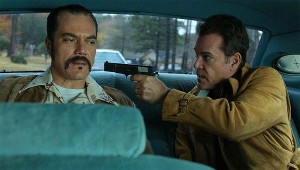 The film opens in 1964 New Jersey with Kuklinski awkwardly courting his future wife (Winona Ryder). He’s clearly uncomfortable in this environment. “You look like  a prettier version of Natalie Wood,” he tells her sheepishly over dinner. Minutes later in the film, we witness him cutting a man’s throat in his car for making some insulting remarks about her. Here, he seems comfortable.

The fuse is lit early on, but it’s not until Kuklinski is hired as an enforcer by mob boss Roy DeMeo (Ray Liotta) that any confusion we might have about his disposition is allayed. After putting a bullet in a homeless man to prove his resolve, we see some kind of expression surface on his otherwise granite face – perhaps more Shannon’s instinct to feign some depth than Kuklinski actually possessing it – but a sign nonetheless that this character, who would father two children and remain married for two decades to an oblivious wife, has at least some range of emotions. When he finally does blow a fuse, it’s almost a relief.

Though the film remains mostly on the periphery of Kuklinki’s unstable mind, it’s fascinating to watch Shannon milk his character for all his disturbing subtleties. It’s tricky to keep an audience invested in a homicidal protagonist (e.g. “Dexter” and “American Psycho” ), and while I doubt that Ariel Vromen, who co-scripted the film with Morgan Land, expects us to sympathize with a man who committed roughly a hundred murders over a twenty-year span, he certainly relies on Shannon to keep us connected.

In a scene that suggests a perverse enjoyment of his trade, Kuklinski challenges one of his contracts (James Franco), who begins to pray for his life, to ask God to come down and stop him. Let’s just say Franco’s role is a cameo. 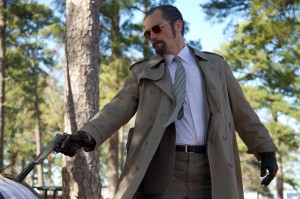 But if the term “sociopath” were a fitting description for the real-life subject of the film, Shannon’s portrayal of him might be less easily labeled. Though “The Iceman” is undoubtedly dressed up to give the character a few qualities that may not have been  part of Kuklinski’s actual personality, he’s still a ticking time bomb with a propensity for killing (with one stipulation: no women or children), though the closest we get to understanding why comes from an angry verbal exchange he has with his brother (Stephen Dorff) who is behind bars for murder.

The ancillary characters are a mixed bag, curious but well cast. Chris Evans plays against type as a freelance gun-for-hire who makes Kuklinski look saintly by comparison; David Schwimmer looks like a ridiculous “Boogie Nights” reject playing the requisite Christopher Soprano screw-up type. Liotta is great, of course, but no surprise – he takes a lateral step from any number of his seedy mob characters, most recently in “Killing Them Softly”. And there’s the typical “Goodfellas” look to go with it, wardrobes appropriately saturated with ‘60s and ‘70s earth tones.

But “The Iceman” belongs to Michael Shannon, whose very presence onscreen keeps the suspense elevated. If we’re initially fooled into thinking that his moral compass is simply substandard, or that his being occasionally overly-chivalrous might indicate some potential redemption, it’s only because Shannon’s shy demeanor is just as convincing as his murderous stare. He’s like a lit bottle rocket trapped in a jar.