Posted by Michael Parsons on May 17, 2013 in Movie Reviews / No Comments

(Note: This review was originally published on May 17, 2013 at Reel Film News)

I’m not sure what I expected from “Stories We Tell”, and apparently neither did director Sarah Polley when she set out to make it. Ostensibly a chronicle for some personal archive that might one day resurface in a time capsule for the great grandkids to appreciate, this documentary cum cathartic autobiography turns out to be as revelatory to the director as it is to the audience, if not so deeply personal that you probably won’t get most of the Polley family’s idiosyncrasies. Of course, this winds up being a big part of the film’s charm – no airs and graces are put on for the camera, and I imagine that the editing room floor remained relatively uncluttered.

Initially resembling a college kid coming home to do some sort of thesis on human behavior, Polley turns the lens on her Toronto-based family with the objective of learning more about their past through individual interviews (or ‘interrogations’, as the director semi-jokes), perhaps looking to elicit a Freudian slip here or there. What exactly she’s looking for is initially unclear, but it’s apparent that she’s mining for something significant. 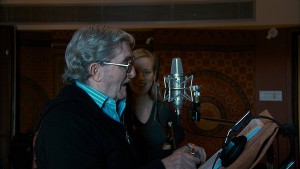 The ‘storytellers’ include her father Michael, a British born, classically trained actor who lends a poetic narrative to the proceedings from his memoirs, her four siblings  (Joanna, Mark, Susy and John) and various family friends, all of whom seem appropriately apprehensive about the project but contribute their perspectives nonetheless. It’s difficult not to like these people – though we never see them in the same room, you get the sense that they are a cohesive, caring group.

The documentary – actually a more fitting description might be ‘experiment’ – yields some interesting, often conflicting stories about Sarah’s parents, who harbored some pretty big secrets that are revealed to her along the way. The centerpiece of these stories is Sarah’s mother Diane, also an actor, who died of cancer when Polley was eleven years old. Some of these recollections of her are funny, others could inspire a Nicholas Sparks novel. Illustrated with Super 8 footage for nostalgic effect (and actor Rebecca Jenkins as a likeness to Diane), this documentary even manages some dramatic twists along the way.

Polley, who starred in films like “Go” and “Splice” and directed “Away From Her” and last year’s “Take This Waltz” , works her way into some unusual territory with her first feature-length slice of reality. There’s a sense – and in fact it’s stated later in the film – that we’re watching something that wasn’t necessarily being made for public viewing, like reading someone’s diary or eavesdropping on a family dinner. In that regard, it’s a wholly entertaining, often humorous experience.

It’s what Polley achieves for the rest of us – outside the scope of her personal life, that is – that makes the film so relatable. “Stories We Tell” becomes a casual examination of nostalgia skewing our perception of the past, whether it be an individual or an event.

For the director to remain objective through such personal discovery seems almost a paradoxical endeavor, but then again, “Stories We Tell” is more about how peoples’ memories can contradict each other – how stories change as they evolve in our minds – than it is about some absolute truth. Documentaries often have a way of becoming more about the filmmaker and fancy editing than its topic, but Polley avoids self-indulgence altogether, instead braving total transparency in order not to dilute or trivialize a very touching piece of family history.