Last year when I interviewed Tony Todd for “Final Destination 5”, he was already in serious promotional mode for a new film called “Sushi Girl”, in which he co-stars with Mark Hamill, James Duval and Andy Mackenzie, and is also billed among nearly twenty other producers. Director/co-writer Kern Saxton’s feature debut is a purportedly gory, stylish, retro revenge flick; technically, it delivers on all those fronts, a tribute to old-school exploitative gangster schlock. But the film loses a lot of the spirit that’s promised by Shirley Bassey’s opening theme ‘Diamonds Are Forever’, languishing under a heavily derivative storyline and relying mainly on the masochistic tendencies of its characters for its flavor. Still, it’s Todd’s best role in years. 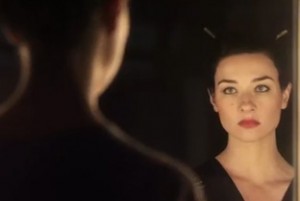 The film revolves around an eclectic, violent group of criminals who begrudgingly reunite for dinner in a remote warehouse to figure out what went awry during a diamond heist, which is revealed through a series of flashbacks. Sound vaguely familiar?

If the premise is more than just a little reminiscent of “Reservoir Dogs”, then you already have a pretty good idea of what’s in store for you; go into it with an ‘ I just wanna be entertained’ attitude, and try to forgive Mark Hamill (“Star Wars”) for playing such a disproportionately cartoonish gay bad guy, and there might be a few pleasant (and not-so-pleasant) surprises along the way.

For starters, “Sushi Girl” never seems to take itself too seriously, even during its gruesome moments (of which there are plenty). The titular centerpiece, a veritable human sushi platter played by an admittedly intriguing, naked Cortney Palm (“Silent Night”), who seems to have no great relevance for the majority of the film, sustains a vital curiosity. The character is trained to be still, no matter what transpires around her, and a lot does. This doesn’t seem like a great party planning idea for a bunch of felons convening over money issues; nevertheless, it serves as an interesting distraction from some intense dinner conversation.

While 45 minutes in, I might have described the film as a ‘guilty pleasure’, it eventually replaces the pleasure aspect with some level of pain – or at least a test of patience – like a stage play that’s not sure where it’s going, devolving into a routine of beatings and empty conversations. Todd (“Candyman”), plays Duke, who six years after the botched heist  summons the four surviving members of his team to a remote location for their feast. One of them, a gangly fellow named Fish (Noah Hathaway, most famous for “The Neverending Story” almost three decades ago) has just been released from prison; he is lured there under the false pretense that it is a celebratory affair. But it’s really because Duke suspects Fish of hiding the money. Ironically, Fish hates sushi. 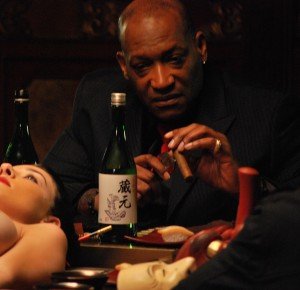 Graphic violence ensues, mainly in the form of one long, bloody interrogation that eventually starts to run out of fuel. Saxton and writing partner Destin Pfaff (the guy from the reality series “Millionaire Matchmaker”, who also wrote “Married in a Year”) take a big risk with a film that closely resembles one of the most revered crime films of all time (think of an extended version of the famous ear-carving scene with Michael Madsen). Hey, at least it emulates a really good movie.

A little more ‘grindhouse’ and a touch less intellectual than the Tarantino classic, which essentially set the precedent for post-modern, ultra-violent American cinema back in ’92, “Sushi Girl” attempts to make its bones with several cameos. Michael Biehn, Sonny Chiba, Jeff Fahey and Danny Trejo all play ancillary characters who will likely trigger your nostalgia for ‘70s and ‘80s action films. Its characters are wildly diverse, like “The Expendables” of B cinema; still, it seems like there are too many cooks in the kitchen here, and they tend to cancel each other out.