Posted by Michael Parsons on September 21, 2012 in Movie Reviews / No Comments

(This review was originally published on September 21, 2012 at Reel Film News)

I had a strong visceral reaction – well, several actually – to “End of Watch”, which culminated in something of a love/hate feeling for me, stemming perhaps from my inability to get a grip on the film’s direction for more than two minutes at a stretch. Though writer/director David Ayer’s erratic style is no doubt a deliberate component of the film’s realistic quality and change-on-a-dime mood, proving effective for many edge-of-your seat moments (and even a few laughs), it is also intermittently annoying; I must have changed my opinion about twenty times while watching it. That said, it’s hard to argue that the interaction between the central characters, two uniformed LAPD officers portrayed by Jake Gyllenhaal and Michael Peña, isn’t the most genuine dynamic I’ve seen in some time. Their dialogue and Oscar-worthy performances – yes, I said it – are what keep the film from flying completely off the rails, and ultimately makes it far more interesting than irritating. 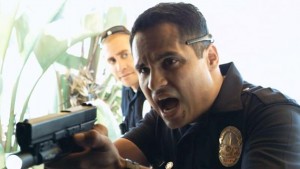 To describe the film as ‘gritty’ would be quite an understatement, and a blatant disservice to those still developing their fortitude for graphic realism (replete with F-bombs and an overwhelming number of camera angles). We see everything from eye-knifings and bashed-in faces to dismembered bodies, perspectives shot from POV to shotgun barrels, overhead and underneath, for all intents and purposes, feeling very, very real. In a few scenes, there are so many close-ups I almost lost my depth perception. But that’s not the most unusual aspect of “End of Watch”, which despite everything I just described, feels well-intentioned, and more importantly, original.  Just when I thought the LAPD had been depicted every which way in the movies (typically embroiled in a scandal of some sort), Ayer has changed gears, here using the forces of good to exemplify the positive influence of the police (save the requisite line, “the department will *bleep* you in the *bleep* – watch your six!”). Having scripted “Training Day”, “Dark Blue” and “S.W.A.T.”, one might associate Ayer almost exclusively with a now dried up premise, an entity all but tapped for its remaining box office worth. Okay, so that’ll never happen, but “End of Watch” is not the next typical LAPD crime drama, nor simply the next twist on the ever-evolving formula of good vs. corruption in the department (like “Street Kings”, directed by Ayer, which I enjoyed but found predictable). This film’s progression instead comes across a bit like “The Hurt Locker” in South Central.

“End of Watch”, from a term I believe can be interpreted both as the end of an officer’s shift and slang for a more permanent type of ‘clocking out ‘, is essentially a ride-along program for the audience, a view into the everyday world of two beat cops in South Central Los Angeles who are doing their job, albeit an extremely dangerous one. There’s nothing at all complex about the film, but there are plenty of compelling, often disturbing moments over the four months that it follows them. Ayer sets the tone early: the film opens in the middle of a high-speed pursuit as seen through a squad car dash-cam, which eventually ends in a close range shootout in front of the cruiser. The two officers, Taylor (Gyllenhaal) and Zavala(Peña) are cleared as the incident is considered a clean shoot, even though “an on the job shooting is still considered a homicide”. This is preceded by Taylor installing a camera in his badge for an ambiguously purposed film project he’s working on, a perspective that interchanges with the aforementioned abundance of angles throughout the film. If the change-ups sometimes make you feel like you’re on a tilt-a-whirl, then you’re getting the intended effect. 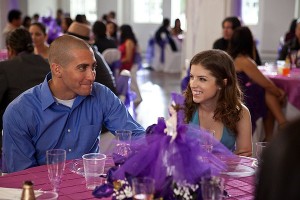 The reward here is that Taylor and Zavala have no ulterior motive, are inherently good, and are inseparable. The more drugs, guns and gangbangers they encounter, the more determined they are to do the right thing. And it seems they always do, though it lands them in several life-threatening situations. In one instance, Zavala selflessly enters a burning house to save several trapped children with Taylor in tow. Later, Taylor admits that he was terrified. “I only went in because you did,” he says. The characters develop as we dip in and out of their personal lives, following Taylor’s budding relationship with Janet (Anna Kendrick, “Up in the Air”) and Zavala anticipating a child with his wife Gabby (Natalie Martinez, “Death Race”).

Perhaps advancing to the next phase of filmmaking to escape a sub-genre that has inadvertently created its own already threadbare formula by trying too hard to avoid conventions from earlier films, “End of Watch” transcends nearly every precedent set since “Colors” in 1988. Ayer has written his own set of rules; there’s so little structure for this story to adhere to that the film unravels more like an improvisational experiment than a mainstream film. With that, however, comes a level of frenetic energy that most crime dramas, not to mention action films, could ever sustain. Ayers really went for it this time, and for all intents and purposes has succeeded. “End of Watch” will stick with you, whether you like it or not.