Posted by Michael Parsons on September 14, 2012 in Movie Reviews / No Comments

(This review was originally published on September 14, 2012 at Reel Film News)

If “Detropia” is truly a hint of what’s in store for America’s economy, you might feel like our future is going to look bleaker than “Blade Runner”.

Indeed, the effectiveness of this documentary comes from its shockingly post-apocalyptic vibe, not necessarily the controversy over unions and bailouts. This is a depiction of reality that comes in a surprisingly artistic, surreal, sometimes creepy package; it’s a vision of Detroit that, 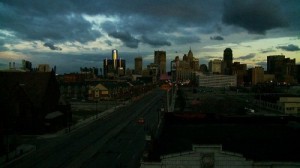 as a jazz club proprietor suggests in the film, is a gauge of what’s to come for every city in the country. The fact that he states that it is only his opinion doesn’t seem to make it any less disturbing, but the film never loses an inherent, if not fully explainable optimism.

Detroit, which was the fastest growing industrial metropolis of the 1930’s, experienced an equally dramatic decline in its population over the last decade. Once a mecca for jobs and growth based on a robust auto industry, Motor City is now trying to recover from a mass exodus and a staggering fifty percent decline in manufacturing jobs – that’s roughly six million workers – with families continuing to leave at approximately one unit every 20 minutes. As of 2009, according to the Census Bureau, the city’s population was the lowest it’s been in a century, at approximately 700,000 people.

Many of these stats are thrown at us early to ensure that we grasp the magnitude of their plight. Sure enough, like the majority of semi-educated folks that have some inkling of what’s going on in our economy, I was still shocked by footage of a veritable ghost town, remnants of a full-on financial implosion, that I was not fully prepared for. Some of the opening scenes, which follow a video blogger named Crystal Starr through an abandoned building, are akin to something like “28 Days Later”. The eerie score only heightens that sensation. 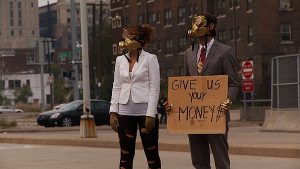 More surprising, however, is the film’s adhesion to the hope and perseverance of its everyday people who, aside from trying to save their jobs, are determined to rebuild their city. There’s an unfiltered anger that surfaces in the film; we see some residents protesting the mayor’s proposal for ‘downsizing’, which is essentially a plan to sustainably repurpose 40 of the city’s 139 square miles that have remained unused or abandoned, and which would require many of the city’s residents to relocate to other sections of town. It’s also purposefully rough around the edges, to say the least; sans narrator, it remains observant, quiet and unbiased, leaving opinions and interpretation to the viewer, and certainly does not suffer from over-editing. In one scene we see a group of guys salvaging some scrap metal in the middle of the night which they will in turn sell for roughly eleven cents a pound. “Detropia” doesn’t attempt to give too much of a history lesson either – perhaps it was post-Cold War complacency that perpetuated what one gentlemen refers to as “the rise and demise of industry.” In other words, at some point, it’s going to be someone else’s turn.

One of several locally influential Detroiters who lend their perspective to the film, Tommy Stephens, owner of the Raven Lounge, laments over auto technology and jobs going over to China. He’s a realist in almost every sense of the word, and isn’t buying the word ‘recession’. “We’re where we were in 1929,” he says. “They’re just not saying it because it would scare the American people.” Like George McGregor, president of the Local 22 Auto Worker’s Union, the ripple effect from the collapsing economy has a profound effect on everyone. Even the Detroit Opera House gets 70 percent of its funding from the auto makers.

Making a statement neither for nor against capitalism, the film takes a different, mostly refreshing approach to the socioeconomic commentary. Directed by Heidi Ewing and Rachel Grady (two contributing directors behind the much less provocative “Freakonomics”), “Detropia” explores the current state of the American economy through its most extreme recent catastrophe – the auto industry – on an unusual and personal level. There’s a particularly poignant scene late in the film in which a relatively tall, dilapidated structure is captured literally swaying in the breeze. It’s an unsettling image against the backdrop of a financially devastated city.

“Detropia” is not rated, but contains strong language and some pretty upsetting statistics.