Posted by Michael Parsons on February 24, 2012 in Movie Reviews / No Comments

(This review was originally published on February 24, 2012 at Reel Film News)

“Rampart” is familiar territory for novelist/screenwriter James Ellroy, whose version of Los Angeles has seen its share of corrupt cops (“Street Kings”, “Dark Blue” and “L.A. Confidential”). Director and co-writer Oren Moverman takes a surprisingly subtle tack in conveying the ugliness of the material, which ostensibly concerns the police brutality scandal plaguing the city’s Rampart precinct in the late ’90s. But as an intense character study, the film focuses almost entirely on Dave Brown (Woody Harrelson), a corrupt LAPD veteran who seems to be caught in a destructive, self-fulfilling prophecy. The story works, most of the time. 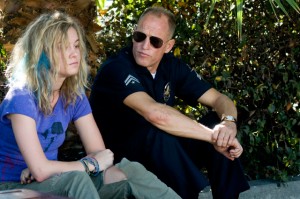 Initially, I thought “Rampart” was going to be a lot more like an episode of “The Shield”, with a department embroiled in controversy and only a few clear-cut protagonists. Though it draws plenty of  parallels there, this film isn’t quite as blunt; the violence takes a backseat to the mentality of its central character, whose faulty decision making is perpetuated by paranoia.

After being caught on video beating a man who collides with his police cruiser at an intersection, Brown becomes the center of unwanted legal attention at the department. At first, his cockiness is more evident than his insecurities. Though he’s perceived as a racist, his language is not weighed down with obvious derogatory terms. Instead, his extensive knowledge of the law, which he spouts like a textbook during his defense, along with his corrosive cynicism, reinforces a wasted, if not frightening intelligence.

As much as the film might echo the true events of the time, “Rampart” dedicates itself only to Dave’s delusional world, one where he’s shacked up with two sisters (Cynthia Nixon and Anne Heche), each with whom he has a daughter. Brown’s behavior toward women fluctuates

between chivalrous and chauvinistic, as if he doesn’t know whether to be controlling or submissive. He trawls the bars at night in search of companionship, and develops an odd relationship with a defense attorney (Robin Wright), a courtship that seems more driven by disdain than attraction. And his only ‘friend’ seems to be an equally despicable ex-cop (played by Ned Beatty) who occasionally throws him a tip when he’s desperate for cash. Harrelson looks like he’s in a constant hypertensive state – red-faced, with an errant vein pulsing at his temple – as if his demons are always lurking just beneath the surface.

Avoiding convention at all costs (sometimes at the expense of reason) “Rampart” is a skewed perspective, mixing the mundane with the surreal, as we’re immersed in Dave’s every day life. Brown’s idiosyncrasies control the movie; emphasis is put on everything from his unusual cult-like living situation to his dietary habits (he never eats, save a rather disturbing binge scene). He exists on a regimen of cigarettes and pharmaceuticals. 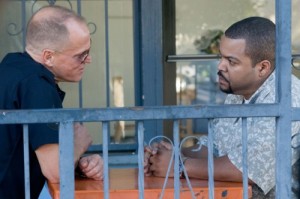 Though “Rampart”‘s ensemble cast (particularly Sigourney Weaver, Steve Buscemi and Ice Cube) is not entirely wasted, they’re only around to provide some semblance of authority. The rest of the film, like Brown’s deteriorating life, seems to have no parameters, which conveys his loss of control. I think Moverman and Ellroy have clearly avoided cramming the gory particulars down our throats, unlike other films of its kind, but in doing so leave us to make too many of our own assumptions. It’s not always clear if they’re challenging us to sympathize with a tortured, misunderstood man or if they’re just exploring the complexities of a damaged soul. Is there supposed to be a redeeming quality to this character? Maybe we’re simply supposed to hate him for his actions. Regardless, Harrelson carries the film as believably as if his own psyche were under extreme duress; it’s not the most pleasant journey, but the performance is pretty damn impressive.