Posted by Michael Parsons on February 17, 2012 in Movie Reviews / 1 Comment

(This review was originally published on February 17, 2012 at Reel Film News)

‘A place calling itself Rome’ looks a lot more like war-torn Serbia in “Coriolanus”, Ralph Fiennes’ version of the politically charged Shakespeare tragedy. Not as much an update of the play as an application of the script to a more relatable era (with a treatment by “Gladiator” and “Hugo” screenwriter John Logan), the film replaces the archaic battle implements of ancient Rome with the automatic weapons and Kevlar of modern warfare. Initially bearing a visual resemblance to something like “Green Zone”, with which it shares cinematographer Barry Ackroyd (“The Hurt Locker”), “Coriolanus” is a film altogether different in its mixture of elements. But the politics and language, for all intents and purposes, remain the same. 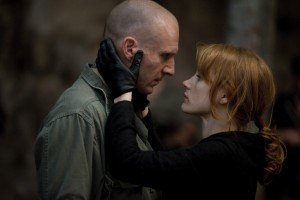 So here we get the best of both worlds, at least in my opinion. “Coriolanus” marks Fiennes’ directorial debut and second time portraying the title role (the first was on stage over a decade ago), the fearless Roman General Caius Martius who earns the sobriquet ‘Coriolanus’ after successfully invading the Volscian city of Corioles. Lead by arch nemesis Tallus Aufidius (Gerard Butler, who had a role in Steven Berkoff’s 1996 stage production), the Volsces retreat to the city of Antium. In Rome, though hailed by the patricians, advisors, and an overbearing mother (a perfectly cast Vanessa Redgrave), Coriolanus is spurned by the people, who he refuses to appease for the sake of popularity or to win Consul. Amongst themselves, the citizens decide that Coriolanus has robbed them of their civil liberties, many of whom have gone hungry due to border disputes impeding the delivery of grain. He is eventually exiled for treason by the masses at the persuasion of the Tribunes (James Nesbitt and Paul Jesson), labeling him ‘the people’s enemy’, and in response to his country’s betrayal, seeks out Aufidius to offer his allegiance to the Volscian army. 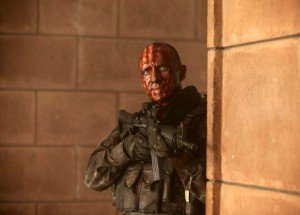 If you’ve read or seen the play, you know the story from here. If not, don’t judge “Coriolanus” by its trailer, which was undoubtedly fashioned for a more mainstream audience (you’ll notice minimal dialogue in the preview). Though ostensibly a war film, this is still more Shakespeare than “Black Hawk Down”. In fact, it’s almost verbatim, save the occasional adjustment by Logan. Unlike Baz Luhrmann’s awkwardly anachronistic “Romeo + Juliet”, the Shakespeare lexicon feels oddly natural in this contemporary world of “Coriolanus”, though occasionally the whole package has the surreal mood of ‘alternate present’ type films like “1984” and “V For Vendetta” (there is occasional news commentary broadcast on ‘Fidelity TV’ to fill in the cracks). To me, this makes it even more interesting.

“Coriolanus” works well as a deviation from the traditional setting while maintaining the play’s original poetic tongue. This might be attributed to its classically trained supporting cast, including Brian Cox as the diplomatic patrician Menenius and Jessica Chastain (“The Debt”, “The Help”) as Coriolanus’s wife Virgilia, who both seem as genuine as real-life blue 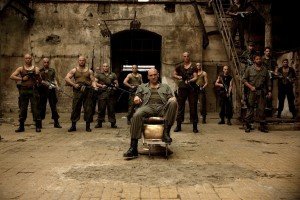 bloods. But the film’s posture is held by the central characters; Fiennes owns the role of Coriolanus with cathartic intensity, an energy I imagine would have taken exhausting discipline (or perhaps method acting) to sustain. Early on in the film, you can feel him vacillating between determination and insanity as they infiltrate the Volscian city, his face perpetually bloodied, exaggerating the whites of his eyes as he kills his way to Aufidius. Gerard Butler is more amped and utterly immersed in his role than I think I’ve seen him since “300”; though he doesn’t actually have that much screen time, it’s as much as he requires.

After the first (and only major) action sequence, which is about ten minutes of minimal dialogue, you might forget that you’re watching a play. But once it gets into the politics of things, you’ll find the script starts working against the structure of a typical drama and are reminded that this is indeed Shakespeare. “Coriolanus” is perhaps more relevant for our time than Shakespeare’s more popular tragedies like “King Lear” and “Macbeth”, particularly in its depiction of early democracy. Here the tragedy befalls the man, not the people. Being far from an authority on the playwright, I often find his writing something to appreciate rather than enjoy, but in this case, I was able to do both. Coriolanus was a man of action, feigning nothing, regretting nothing. It seems the same is true of Fiennes, who has already become an auteur.