Posted by Michael Parsons on September 23, 2011 in Movie Reviews / No Comments

(This review was originally published on September 23, 2011 at The Rogers Revue)

“Killing is easy. Living with it is the hard part,” says Danny Bryce, Jason Statham’s character in “Killer Elite”.

Though this nugget of wisdom is not imparted until well into the second half of the film, it’s a pretty good meter of what to expect in Gary McKendry’s  adaptation of Sir Ranulph Fiennes controversial ‘true adventure’ book The Feather Men. Published in 1991, the book originally claimed to be an account of an assassination plot against the British military officers allegedly responsible for killing the sons of an Omani sheikh during Britain’s unofficial campaign in the Middle East. Since then its factual accuracy has been picked to the bone and is now viewed predominantly as a work of fiction. 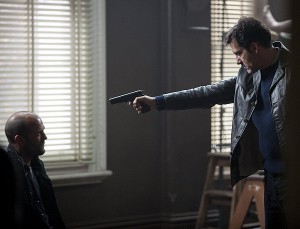 The film version aspires to be a few things; an authentic looking period piece, an un-stylized action throwback and a Jason Statham movie, all wrapped up and advertised as a ‘true story’. And why not? This combination seemed to work pretty well in 2008′s “The Bank Job”, a crafty period  flick that paired Roger Donaldson’s direction with the sharp editing of John Gilbert; having Gilbert onboard for “Killer Elite” would seem fitting. But the name of the game is balance, and though first time feature director Gary McKendry does a good job replicating the temperature of the early 80s, his execution doesn’t seem to jive with Gilbert’s cutting-room proficiency.

Danny Bryce is an operative who retires from active duty after a moral conflict results in a publicly botched execution. “I’m done,” he says to his partner Hunter (Robert De Niro) after a bloody firefight. Exiling himself to a farm in Australia, Danny has all but found peace when he is informed of his old partners abduction by an Omani sheikh. Hunter’s release will be secured only if Danny executes the SAS members responsible for killing the sheik’s sons. Immediately recruiting Davies (a barely recognizable Dominic Purcell) and Meier (Aden Young), Danny proceeds on a globetrotting mission to aquire his targets.

On the opposite end of this conflict is a fraternity of retired SAS operatives who dispatch a loyalist pit bull named Spike (Clive Owen) to track down and eliminate the threat to their brethren while periodically convening to deliberate politics in their pinstripes. Retired himself, Spike proves his dedication to protect his fellow SAS members, while this wealthy geriatric secret society – the Feather Men of the book’s title – appear only to be covering their own butts in the wake of their questionable activity in Oman. When Spike questions the motives of his superiors, they remind him that he too is out of the game; he realizes their true interests are no longer aligned with his (incidentally the only truly clean agenda in the film )and Spike ‘goes rogue’ to finish what he started.

The rival parties don’t realize who they are ultimately at odds with until later, and soon enough the film becomes a pretty mechanical game of killing, though it is never quite clear who the ‘elite’ actually are. Everyone begins to feel like a morally ambiguous pawn, though we might initially have been inclined to feel differently about Danny whose conscience caused him to hang up his guns in the first place. Requisite flashbacks to his Australian paramour back on the ranch (Yvonne Strahovski) are forced into the script to remind us, I think, that we are supposed to be rooting for him. People fall like dominos around Danny and Spike, but when it finally comes to their initial confrontation, the dynamic falls about as flat as a bar fight.

The acting is on par with what we’d expect individually from Statham, Owen and De Niro, but much of the supporting cast come across as a bit cartoonish. From the presentation of  the secret society to Davies’ mutton chops, it feels like it’s trying too hard to prove itself as a retro piece and sometimes feels a bit like a Monty Python rendition of “3 Days of the Condor”.

“Killer Elite” doesn’t misfire on every level, but it falls woefully short of its potential. While putting a machine gun in Robert De Niro’s hands is never a bad idea for a good time (think “Heat” and “Ronin”), it really only serves as fodder for a good TV spot here, and his screen time is limited to the bookends of the film. Even the hand-to-hand fight sequences are played, literally, too close to the chest, particularly between Owen and Statham, smothering what I had anticipated to be the most adrenaline-inducing scenes of the film. The gunfights, with the exception of the opening sequence, are a bit flaccid. There just doesn’t seem to be much consequence for our main characters from scene to scene.

Chances are audiences who pay to see “Killer Elite” in theaters are going to be far less interested in its historical accuracy than Statham’s propensity for ass-kicking. Matt Sherring’s screenplay definitely takes its cue from Danny’s side of the story, making this unquestionably a Jason Statham movie, but herein lies the film’s biggest problem; this concoction of genre elements all detract from one another, and Owen’s character is easily the most interesting. Though the film’s effectiveness as a kick-in-the-crotch homage to 1980′s action movies is debatable, everything seems a little out of place. A few tweaks and “Killer Elite” might have hit the mark.