Posted by Michael Parsons on January 13, 2017 in Movie Reviews / No Comments

Granola and punk are the diametrically opposed cultural mores of 1979 Santa Barbara in Mike Mills’ darling flick “20th Century Women”, which has the paradoxical quality of feeling both haphazard and polished.  More distinctly, and with little previous work by which to compare, writer/director Mills (“Beginners”) has whittled the multi-generational retro-drama into a concise and meaningful statement about life instead of leaving us with something endlessly contemplative (like many of its ilk tend to do).

It’s the story of 55-year-old Dorothea (Annette Bening), a divorcee raising 15-year-old Jamie (Lucas Jade Zumann). She shares  quarters with  her tenants, a spiritual mechanic named William (Billy Crudup) and   his polar opposite Abbie (Greta Gerwig), a pink-haired misfit whose cervix was recently rendered incompetent after a bout with cancer. Dorothea displays a subtle interest in forty-something William, a delightful 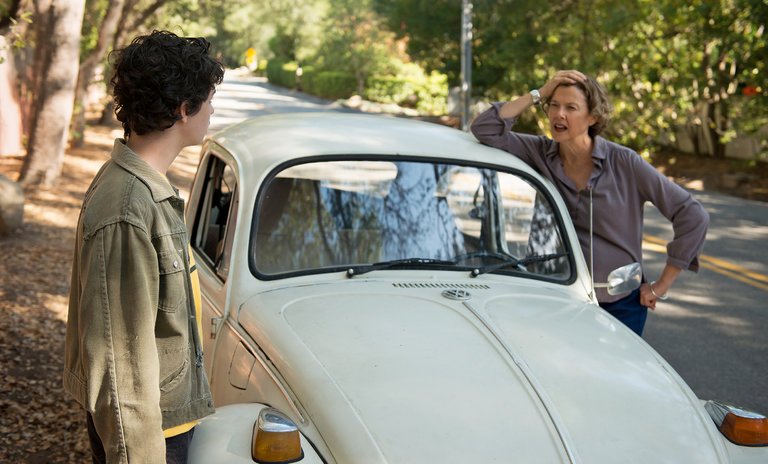 enigma who comes written with back story like the rest of his housemates. He is somewhat of a chick-magnet, but without effort or ego, his personality the fragmented driftwood  from colliding lifestyles.

Mills takes exceptional care of how and when he explains his characters, who emerge with rich, earthy, if slightly bitter, flavor. (The film  should be certified fresh and organic on review aggregator Rotten Tomatoes). Though all of them are excessive in some manner or another, Elle Fanning seems the most severe as Julie, a promiscuous seventeen-year-old who secretly bunks with Jamie but ironically won’t sleep with him. This is an interesting dynamic, and the ultimate purgatory for a burgeoning youth, especially when Dorothea taps Abbie and Julie to help Jamie come out of his shell.

Nothing a book on feminism won’t take care of. Jamie gets a little more education than Dorothea had anticipated to a hilarious but ultimately very enlightening degree–for starters, he learns never to question a classmate when they’re bragging about sex–and it’s notable that Mills takes this route versus having Crudup’s affable character fill the father-figure void. Exposition is concise and interesting and with purpose, and each character’s individual journey is fully realized, while as a whole the film maintains a fine balance of comedy and drama.

Both Mills’ writing and the cast are very matter-of-fact. For example, a dinner table conversation blossoms from the topic of menstruation into Julie describing how she lost her virginity (to a cringing, tortured Jamie). By the same token, there’s a line to be drawn, and  though as liberal as any Birkenstock-wearing mom of the time,  Dorothea is still the most conservative of the bunch. To that effect, Bening doesn’t portray her as an irresponsible bohemian commune-type, rather a parent trying to do best by her kid, because it’s not evident to her that what she’s been doing all along isn’t too shabby.

“20th Century Women” is expressive but devoid of melodrama, saturated with the colors, complexion music of the era—Black Flag and Talking Heads appropriately bookend the spectrum of angst and uncertainty that plague Dorothea’s microcosm of shifting times. One of the best ensembles of the year.