Posted by Michael Parsons on December 20, 2016 in Movie Reviews / No Comments

You can simply read the synopsis of “Lion” and get teary-eyed, so it’s no wonder that the movie, based on Saroo Brierley’s chronicle “A Long Way Home”, will want to make you hold your just kids a little tighter after watching it. Dev Patel headlines this story of the five-year-old Indian boy who gets separated from his older brother and ends up  in Calcutta, hundreds of miles from his tiny town of Ganesh Tilai (which, like his name, he would mispronounce for his entire life). Ending up in one of so many orphan factories where the movie alludes to some of the horrifying things that happen there, the boy Saroo, played by newbie Sunny Pawar, winds up being saved by an adoption coordinator (Deepti Naval) and placed with an Australian family (Nicole Kidman, David Wenham).

Two decades later, Saroo is a grown man (Patel). He meets girlfriend Lucy (Rooney Mara) during his studies at Hotel School, and a serious relationship develops, but then the world’s biggest Google ad gets in the way. It is true: a large portion of the biopic 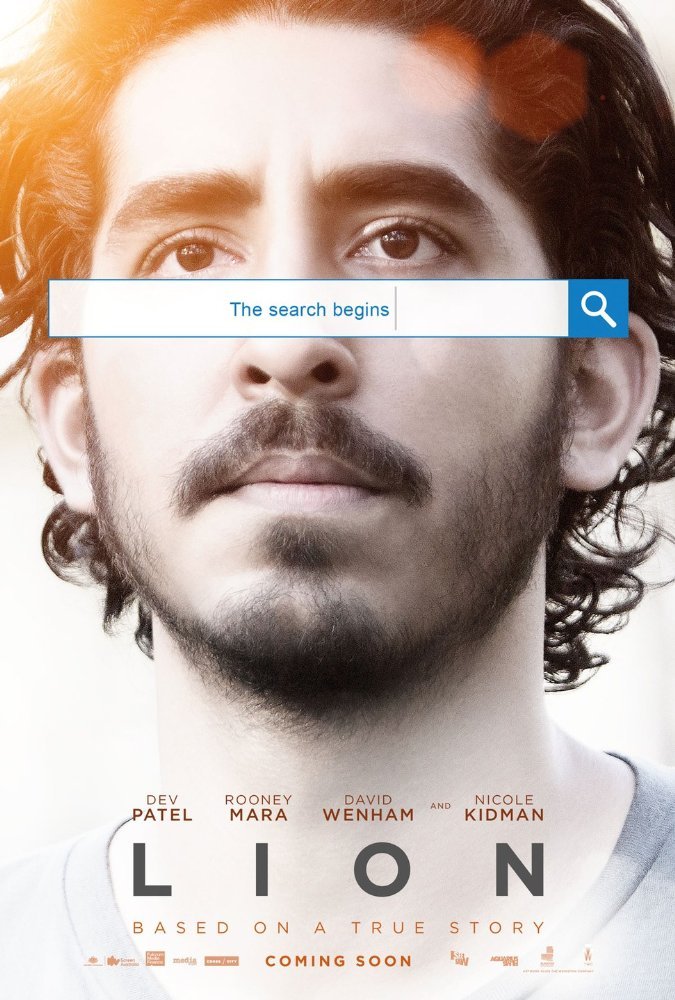 follows Saroo’s understandably obsessive search for his birth family online; He’s plagued by the thought that his mother (Priyanka Bose) and older brother (portrayed as a youth by Abhishek Bharate) have suffered all these years not knowing what had happened to him.

This causes  strain on his relationships—with Lucy, his adoptive parents (Wenham is great, Kidman’s best in a while), and particularly with his adopted brother (Divian Ladwa, notable in some tough-to watch moments), another Indian boy, now a man, struggling with severe PTSD. With Rooney’s character relegated to the periphery, “Lion”—rather, Patel—muscles through the make-or-break point, where either an inspirational story would continue to develop or it would plateau as a movie about a guy on a laptop.

Google aside, some good biopics have been made from far less compelling material. Fresh out of the gate, Aussie director Garth Davis conveys a good sense of time and place, though urgency dissipates a bit since the film runs a rather long 118 minutes.  The first half hinges entirely on young Pawar, perhaps a Patel in the making, while Patel holds the final act together almost entirely on expression and watery eyes. I have not yet read “A Long Way Home”, but I imagine that screenwriter Luke Davies’ adaptation is pretty faithful to Brierley’s memoir; it’s the cast, though, that does justice to Saroo’s story.