Posted by Michael Parsons on March 4, 2016 in Movie Reviews / No Comments

The bromance continues between the Commander-In-Chief (Aaron Eckhart) and his trusty guardian (Gerard Butler) as the West Wing heads east to face another terror attack from the usual suspects in “London Has Fallen”.

To compare the scripts of 2013‘s “Olympus Has Fallen” (a.k.a., “Fuqua’s Mulligan”) and its sequel, “London Has Fallen” (a.k.a.,“Olympus Has Moved Overseas And Fallen Again”) would be like sifting through dog feces to figure out which canine has a more nutritious diet. Better be prepared for it to stink, one way or the other. Like most of their ilk, these brainless rapid-fire flicks are best viewed for what they are, with the pre-disposed notion that they’re not, at least ostensibly, going for anything particularly special. 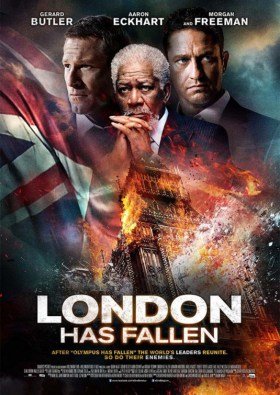 “Olympus Has Fallen” was yet another chintzy “Die Hard” clone that happened to do well at the box office, but was pretty awful, even by the aforementioned standard. Its sequel, while conceptually even dumber and borderline  reckless in its simplistic pandering, is, in fact, a far superior action movie. Stay with me.

Mike Banning (Butler) heads back into action to save the president when Islamic terrorists lure the   leaders of the world to London to blow them all up at the Prime Minister’s funeral. After bombings take out most of London’s historic monuments and about two-thirds of the United Nations (who sit precariously in gridlock while ignoring security measures that even a day care would enforce), Banning, the President and his Chief of Staff (Angela Bassett) find themselves on the run, in the car, in the air, and on the run again.

Most of London’s police force have been compromised, including those really quiet guys with the red coats, funny tall hats and muskets. Communications have been breached, thanks to the newfangled computer inter-web gadgetry that all the bad guys are using these days to shut down entire cities at the click of a button. When the dust has settled from the initial attacks, the city is  as desolate as “28 Days Later”. Perfect setting for one-man army Banning, who has unlimited ammo and an arsenal of one-liners.

The main culprits are  of ambiguous Middle Eastern origin that Banning refers to as “Whereverthef**kistan” when stabbing a guy repeatedly in the ribs. The whole operation is masterminded by supreme terrorist stereotype Barkawi (Alon Moni Aboutboul), an arms dealer seeking revenge for the death of his daughter in a U.S. drone strike two years prior, and he’s intent on capturing President Asher and beheading him on YouTube.

While “Olympus” was confined to the White House, “London” has much more room to go bananas, but the FX are often too ambitious for its measly $110 million budget (I’m talking about you, helicopter chase scene). Once it’s burned through its big trailer highlights, though, this new (and I’m sure not final) movie is more entertaining and well orchestrated than its predecessor. The body count has increased ten fold, ammunition is abundant, and of course, logic is not. Humor lands with blunt force, as the slightly maniacal Banning asserts himself with such  vehement jingoism that I thought they were piping in dialog from an old Chuck Norris movie. The conclusion of the film makes an unsettling point about modern warfare, though I think inadvertently. 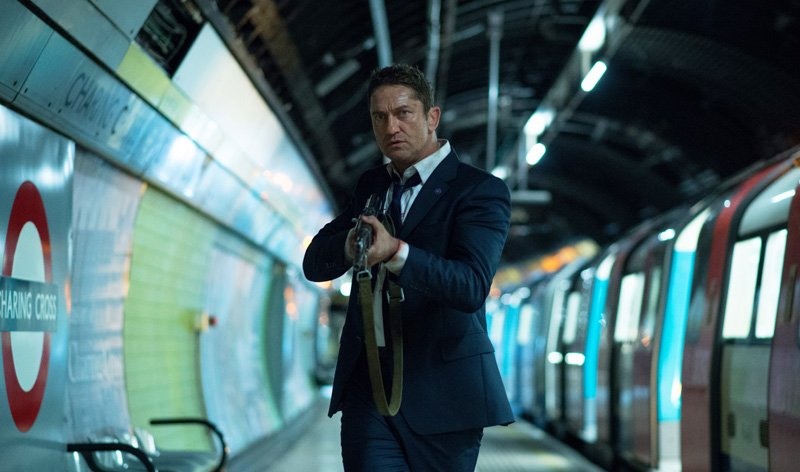 As for “supporting” cast, about seventy-five percent of them have absolutely nothing to do, including Robert Forster, Radha Mitchell and Jackie Earle Haley, and I’m pretty sure that Oscar-winner Melissa Leo doesn’t utter a single line of dialogue. Morgan Freeman reprises his role as the Vice President and says, “Oh…my… GOD”. Again. Hey, at least it’s Freeman.

Few audiences will be in tune with the film’s delicate technical intricacies after the first 45 minutes of non-stop, head pounding carnage, but incoming director Babak Najafi and cinematographer Ed Wild propel the film through potential tedium with a pretty intense  extended sequence in which Banning and a group of troops push headlong down a street into enemy gunfire. It’s a long, fluid take that is noteworthy for its complex arrangement and execution.  If you can endure the musty stench of clichés and absurdity that make up much of the script,  moments like this make “London Has Fallen” a marginally worthy popcorn flick.  And if the movie makes enough money, we’ll be watching “St. Barts Has Fallen”, which will follow the president on a post-term vacation that goes horribly awry.