Posted by Michael Parsons on February 9, 2016 in Movie Reviews / No Comments

“Winter on Fire” documents the 93-day Ukrainian revolution (known as the Euromaidan) that began as a peaceful student protest in Kiev’s Independence Square and ended with president Yanukovych stealthily seeking asylum with Vladimir Putin in Russia. During this time, 125 civilians were killed, with over a thousand injured and/or unaccounted for, all in a fight for their basic freedoms. Unrest had developed in November of 2013 when Yanukovych pulled away from an association agreement with the EU, instead gravitating to their neighbors to the west.

It gives an astonishing ground-level perspective. Initial demonstrations are met with unprecedented civil rights violations by a law enforcement riot-control arm called the Berkut; we watch police repeatedly beating unarmed civilians with their iron batons, unprovoked yet acting with force that would be proportionate to a full-on armed conflict. The offensive is mostly one-sided, courtesy of Yanukovych and his waves of police clones, who go well above their duty to inflict blunt-force trauma on peaceful protestors. The citizens simply try to hold their ground until their collective voice is heard, at one point constructing a fortress out of ice and wood to insulate themselves from the Berkut. We also get first-hand accounts from doctors, lawyers, students, activists,  ex-military and others who united in what became an initiative to overthrow Yanukovych’s dictatorship. To paraphrase one man: “This isn’t even about being part of Europe any more, it’s about our civil rights”.

While watching the film, I was stunned by how far the scope of the event exceeded what I envisioned of it.  “Winter On Fire” is a staggering chronicle with little filter and a lot of resolve. Russian-born director Evgeny Afineevsky said that he wasn’t so worried about framing the perfect shot as he was simply capturing the conflict as it developed organically, obviously not knowing what he was getting into. With a host of over twenty-five camera operators (including himself) navigating the chaos, some the 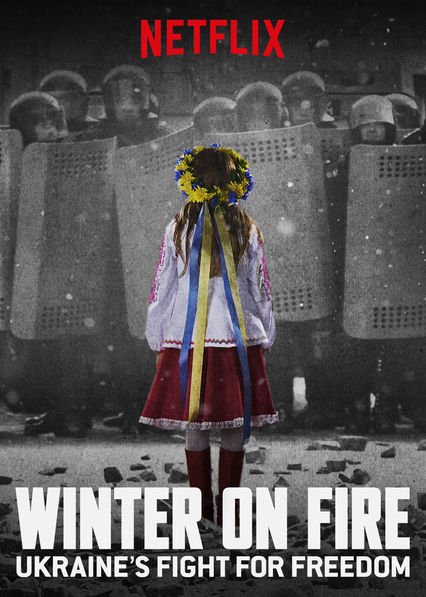 of footage  is as hard to fathom as dystopian fiction like “Equilibrium”, in which the division between a soulless autocracy and righteous freedom fighters is so clearly and simplistically delineated.

But fiction this is not, laments a young boy who is front and center to the escalating violence. Like any good documentary about such a subject should be–another recent example being “7 Days in Syria”–”Winter on Fire” is a tough watch, unsparingly  depicting the rebellion’s casualties, all to bolster the virtue of patriotism, democracy, and perhaps most of all, faith.

As the clergy call on their countrymen to unite, the haunting gongs of the monastery bells echo across the city for the first time in some 800 years, as if the end of days is drawing near. Instead, it’s a harbinger of a triumph  that nearly a million citizens would rally to achieve. On the 93rd day, an ultimatum is presented: Yanukovych must resign, or there will be a full-on armed offensive. Like the Baltimore Colts, Viktor Yanukovych is spotted boarding a jet in the wee hours of the morning, an unconstitutional departure for a tyrannical parasite. And the people prevail. The Oscar-nominated “Winter On Fire” opens at the Angelika Pop-Up at Union Market in Washington, DC on Friday, February 12th,