Posted by Michael Parsons on January 12, 2016 in Movie Reviews / No Comments

Mr. and Mrs. Smith head to France to ignore one another in “By the Sea”, a period trage-mance starring Brad Pitt and Angelina Jolie-Pitt (as she’s billed for writing, directing, co-producing and starring), which could pass for a bona-fide French flick if it weren’t for the conspicuous American talent. High art-house fare through artifice, as it were, as the two talented actors feign a distressed marriage with one woeful expression after another. Hence the title, there are a lot of shots of the emerald sea from a recurring vantage point–the balcony–where Jolie, dressed like Katharine Hepburn at a spring funeral, emerges from the confines of their ornate hotel room to take in the breathtaking vistas and her perpetually shirtless neighbor.

Unless you had an awards screener arrive in your mailbox like I did, you might not have heard of this quiet little movie; it only opened in a handful of theaters, and marketing was virtually nonexistent. (About halfway through the film, my wife likened it to a trashy romance novel–I thought it looked more like a very expensive cologne ad–and now you’re wondering why I gave it three stars). 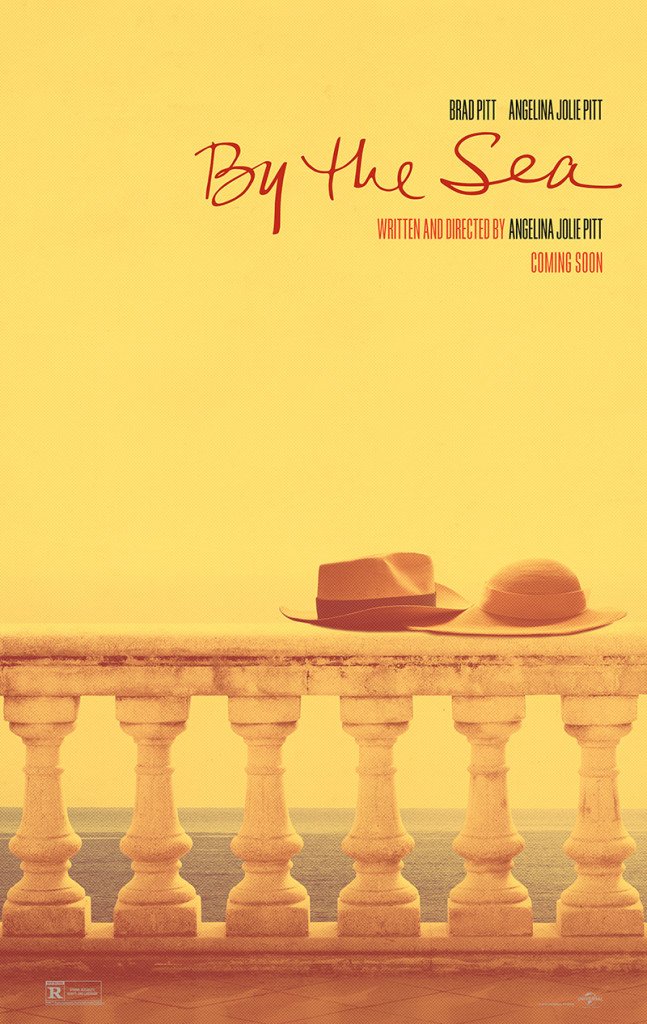 The film takes place in the ’70s, when people seemed to wear a lot of hats (literally, not because they were multi-tasking). Jolie has a chapeau for every occasion, though when she ventures out, it’s usually down to the rocky shore to ponder throwing herself in. Mr. Pitt is a struggling writer who drinks and smokes too much and tries to communicate with his enigmatic spouse, but he mostly gets the silent treatment: “Have a good day”, he says as he exits their room to seek inspiration for his book. “I won’t”, she replies. “I know,” he says. “I love you.” So he continues to drink and smoke while not getting any writing done, growing more frustrated by his marriage and his inability to write (I’m a good writer! he assures everyone) and drinking some more. This was before drinking was bad for you.

All we really know is that something awful has torn this couple apart. While the unspecified tragedy/malady has her on a steady regimen of mood-stabilizers, her better half is firing up conversation with some of the locals (Pitt speaks a whole lot of French), including hotel owner/bartender Michel (Niels Arestrup), a kindly widower who quickly forgives Roland for making a drunken scene one night.

The first half of the movie is about as dull as it sounds. The retro European aesthetic is appealing, though DP Christian Berger doesn’t quite take full advantage of the location. Then, some attractive, younger neighbors move in next door (Melanie Laurent, Melvil Poupaud) to heat things up, giving the Pitts (Roland and Vanessa in the film) a libido boost when they discover that a hole in between their rooms is a gateway to a free live sex show.

So begins a voyeuristic game that spices things up for a while, but then turns ugly; Nessa accuses Roland of lusting after the girl, which he vehemently denies (Did he cheat on her? Is he thinking about cheating on her? Are they reformed swingers? What is it woman, what???). Yet she keeps inviting the sexy Laurent into their room to play cards, which unfortunately is not a euphemism for anything. When her prophecy doesn’t self-fulfill, she goes to more obvious lengths to sabotage their relationship. (We’re still in a cologne commercial, I’m thinking—but hey, they are in France, and everything looks like a cologne commercial in France).

But something about the film fascinated me. Jolie’s story is meandering for sure, and the characters don’t develop nearly fast enough for my taste. But even as the connection between Roland and Vanessa goes from tenuous to downright stagnant, even when the movie feels like it’s gone from deflated to flat, even when the love birds knockin’ boots 24/7 in the adjacent room fail to bring any sort of real excitement to the party, I couldn’t help but feel that the Pitts were actually nervous—despite all the stardom and fanfare surrounding their actual marriage. Suddenly, I found myself watching a deeply honest, even moving picture. Though languid, “By the Sea” is ultimately a poetic take on grief and dysfunction. And like a lot of poetry, it’s an acquired taste. For me, it was good for one helping.