Posted by Michael Parsons on December 11, 2015 in Movie Reviews / 1 Comment

One of the most beautiful and intriguing films of the year comes from Italian writer/director Paolo Sorrentino in his second English language feature “Youth”, which aside from showcasing the talents of Michael Caine, Harvey Keitel and (briefly) Jane Fonda, features exquisite cinematography from Sorrentino’s go-to Luca Bigazzi. Visually, the film recalls Ruben Östlund’s “Force Majeure” and even Wes Anderson’s “The Grand Budapest Hotel” in a spot or two, so vivid and elegant that it’s often hard to tell if what we’re looking at is real or imagined.

Set in the Swiss Alps at a remote resort, which is about seventy-five percent nudist colony (and that’s not exclusive to the young pretty folks), the film focuses on aging buddies Fred Ballinger and Mick Boyle (Caine and Keitel), the former a retired composer and the latter a screenwriter on the backside of his career.

Each man, in his own way, is tortured. In the maestro’s case, it’s pesky Queen Elizabeth II who wants to hear his popular “Simple Songs” performed at the prince’s birthday party, a request that is denied by the composer on several occasions. This is much to the distress of her majesty’s attaché (Alex Macqueen), an anxious fellow who pursues Fred 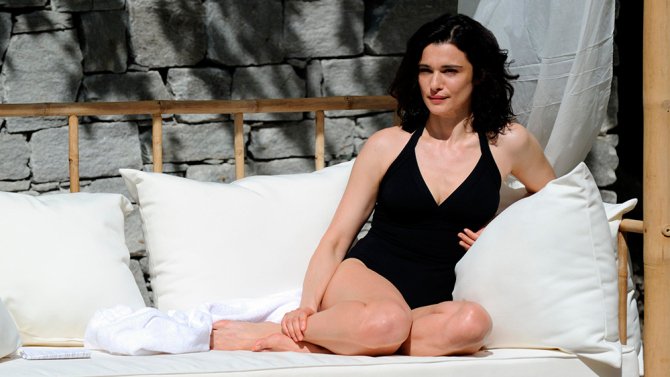 relentlessly. But Fred has retreated to this idyllic setting to continue an annual tradition that he once shared with his wife, whose absence plays a big part in his refusal of the royal invitation. He’d prefer to spend his time reading, or in the pasture demonstrating his appreciation for “more cowbell”.

Mick’s conundrum is a little more conventional. So seems Keitel’s character, as he and a gaggle of young  writers (Tom Lipinski, Chloe Pirrie, Alex Beckett, Nate Dern and Mark Gessner) squabble over a proper conclusion for his opus “Life’s Last Day”, which promises to be more swan song than career resuscitator. While his muse-lacking minions are ridiculous and comically pretentious, the industry-weathered Mick, though equally bereft of ideas, is someone who still appreciates what it’s like to be on the bottom rung. He was highly regarded at some point, but it’s been a while since he’s written anything good, a harsh truth that he’s reminded of by bitter actress Brenda Morel (Jane Fonda’s five minutes on-screen will likely earn her an Oscar nomination), a virulent diva who pulls out of Mick’s project at the eleventh hour.

Younger patrons of the posh establishment include a method actor (Paul Dano) who is at a pivotal point in his career, and struggles with the idea of playing Adolph Hitler in his next big movie. Rachel Weisz is at her best as Fred’s 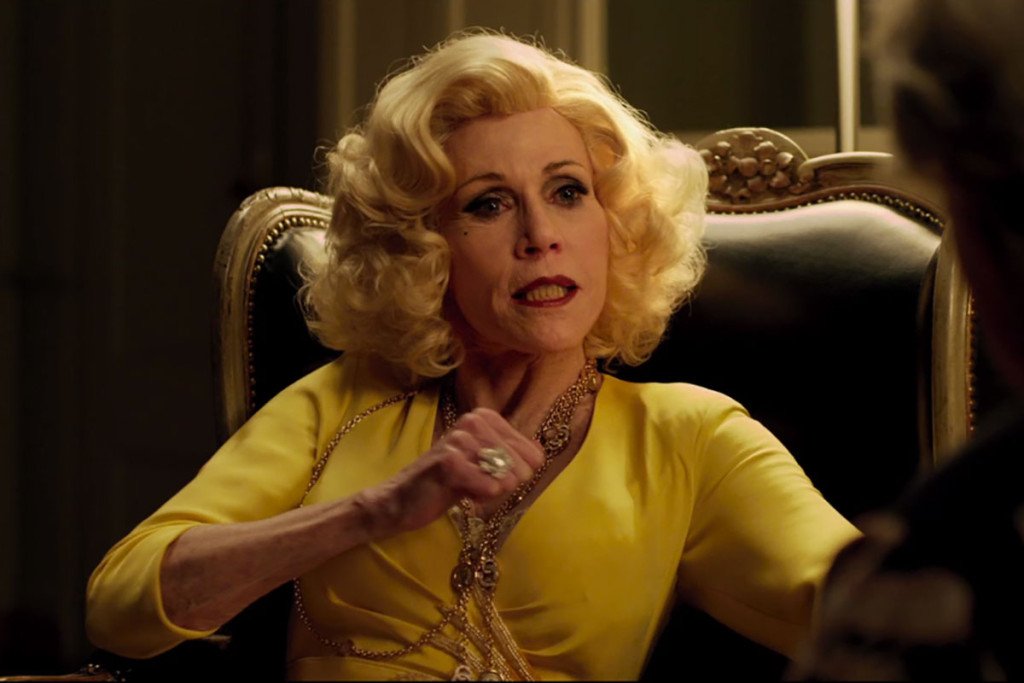 daughter, whose marriage to Mick’s son (Ed Stoppard) crumbles when he announces that he’s leaving her for pop star Paloma Faith (presumably playing a caricature of herself). Faith stars in one of Weisz’s nightmares, played out as a deranged music video that is one of Sorrentino’s more outrageous departures from the film’s generally placid tone.

But “Youth” is at its most entertaining when Caine and Keitel share the screen, as the friends reflect on their sixty-year friendship, confront some long-repressed memories (including an old beef about a girl from high school) and philosophize about what it all means in between spa treatments. But the movie isn’t so full of itself that it doesn’t put its existential musings aside to observe the friends’ amusing reaction to a nude Miss Universe (Madalina Ghenea) wading into the communal hot tub, or placing bets on whether a perpetually quarreling elderly couple will  speak to one another at the dinner table.

Surreal but not necessarily unrealistic, “Youth” is a virtual smorgasbord of fantasy, drama and comedy, a generally gorgeous production that finds its tortured souls in some flawlessly conceived parallel dimension where even the naked bodies that mill about around them feel a bit plasticine. Sorrentino leaves plenty for interpretation, appropriate for the uncertainty of growing old and the haze of youth long past. The film ends on the perfect note, so to speak, for the visual feast that he’s engaged us in, and one of the year’s best ensembles make the film immensely enjoyable to watch.