Posted by Michael Parsons on December 16, 2015 in Movie Reviews / 1 Comment

Note: This review is being written under the assumption that the reader has seen the original “Star Wars” trilogy and won’t scratch their heads at the words “Wookiee”, “X-Wing” or “Death Star”.

There are no Ewoks in the new “Star Wars” film, no Jar Jar Binks, no intergalactic politics. No….. Hayden Christensen.

What the “The Force Awakens” does have is Harrison Ford returning to the fold as the sardonic but charming Han Solo, a little worse for wear since the events of “Return of the Jedi” some 30 years ago, along with faithful sidekick/co-pilot Chewbacca (Peter Mayhew), who hasn’t aged a day. The Wookiee, not Mayhew.

What Ford lacks in charisma, God bless him, is made up for by the fresh characters that he ushers in for this new trilogy. Primarily, Daisy Ridley as a young scavenger named Rey, reformed stormtrooper Finn (John Boyega) and ace pilot Poe Dameron (Oscar Isaac) make for a promising next generation as the “Star Wars” saga moves forward. 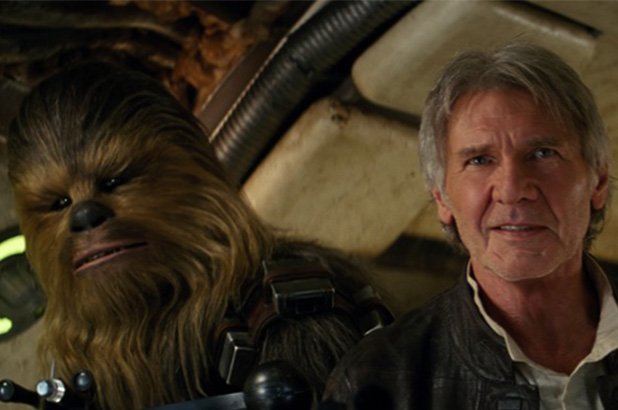 Daring to revitalize the most beloved franchise in history, director J.J Abrams (who was also responsible for the “Star Trek” reboot)  gets back to the basics, with a simple premise that so recalls Episode IV that we’re inclined to embrace its predictable plot turns. Likewise is the set and costume design, which are almost identical to the movie that started it all–I’ll admit that the orange and white X-Wing pilot suits and the retro-design of the spacecraft interior gave me the type of warm and fuzzies that I haven’t had since opening my first Luke Skywalker action figure when I was six.

Luke Skywalker (Mark Hamill) has vanished without a trace, and General Leia Organa, formerly Princess Leia (Carrie Fisher), has sent Isaac’s Poe to a barren, Tatooine-like planet called Jakku to retrieve some information on Luke’s whereabouts. When Poe finds himself in the midst of an attack, he sends his droid BB-8 off to safety and the pilot is subsequently captured by Kylo Ren (Adam Driver), the new Darth Vader on the block. Except Ren, who throws a couple of temper tantrums with his lightsaber during the film, seems far less confident in his abilities. He and a vaguely Aryan military figure called General Hux  (Domhnall Gleeson) answer to Supreme Leader Snoke (Andy Serkis), a giant God-like being who materializes occasionally to keep them in check. But enough about that guy.

The Force has a way of getting people in the right place at the right time. Boyega’s character, deciding that being a stormtrooper doesn’t suit him, so to speak, frees Poe from the clutches of Ren’s evil outfit the First Order (essentially the Empire 2.0), and they make a  very messy and spectacular escape in a TIE Fighter. Just as soon as 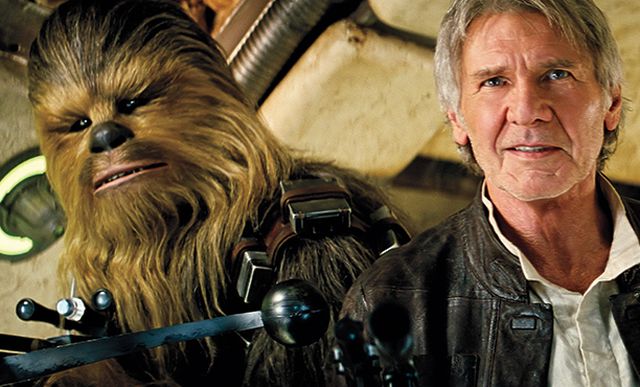 Poe assigns his new ex-stormtrooper buddy the nickname “Finn” (from his serial number FN something),  they’re shot down, crash-landing back on Jakku. Finn narrowly survives, and no sign of Poe.

Searching for water, Finn stumbles upon Ridley’s Rey, a tough customer who, as it happens, has already made the acquaintance of Poe’s BB-8 (which, I should mention, is an impressive, fully functioning little machine) near the scrapyard where she sells parts for meager portions of food. Refusing to pawn the droid even before she’s aware of what it’s carrying–specifically, a partial map that could lead Leia and the Resistance to Skywalker–Rey and Finn soon find themselves under siege again, a scene that leads to the unveiling of a familiar hunk-’o-junk called the Millennium Falcon.

To follow is one of the movie’s most dazzling sequences, as Rey (a pilot, I should mention, but who isn’t?), Finn and BB-8 ditch a few TIE Fighters, weaving the Falcon through the wreckage of an old Imperial Star Destroyer before taking out their pursuers with one very creative maneuver. After heading off into space, it’s not long before the gang find themselves tracked down by the Falcon’s rightful owner, Han Solo (it’s a small universe, after all) who has procured an enemy cargo ship and sucked them in with his tractor beam. 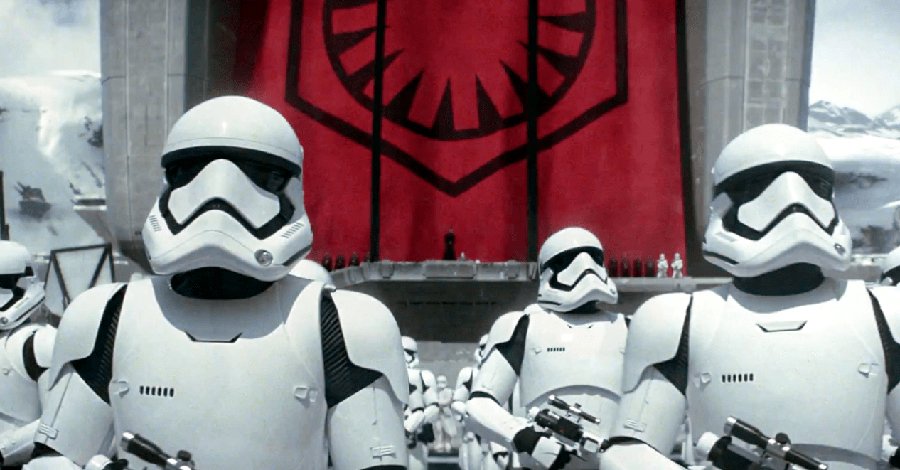 To Rey and Finn, Solo is the stuff of legend, and so are stories of Jedi, The Force and Luke Skywalker. Even when the old crew isn’t on-screen, their presence is felt at the core of the story, a vibe that carries throughout the entire movie as Solo and crew seek out the missing Skywalker. I’ll cease further plot elaboration to avoid spoilers (other than to say that C-3PO and R2D2 do have cameos), but what makes “The Force Awakens” (mostly) work, on top of spectacular dog fights, stunning cinematography from Dan Mindel and John Williams’ classic score, is that it focuses only on a handful of characters–those that we’ve been invested in for decades, and also its appealing new additions. There is one almost fatal casting choice out of the bunch, though it’s beginning to make a little more sense in retrospect, and the melodrama tends to get a little thick–but if you consider how hokey “Star Wars” was sometimes (come on, you know it was), one might consider these overblown moments as Abrams’ steadfast loyalty to the feel of the IV-VI era.

In that vein, despite some grave implications, the tone is fairly upbeat. Finn, for example, has an awfully good sense of humor for someone who’s been groomed to murder since childhood by space Nazis. (As the Commander of the First Order’s new super-weapon project, Domhnall Gleeson gives a particularly hate-fueled speech to a sea of Stormtroopers). Still, “The Force Awakens” is not nearly as dark a film as it could have been (maybe even less so than “The Empire Strikes Back”, still my favorite). Abrams, who co-wrote with “Empire” and “Return of the Jedi” penner Lawrence Kasdan from an original script by Michael Arndt, shows an enormous appreciation for the material, and while he far exceeds Lucas as a director, abandons his own trademark style to emulate the look and feel of the original film.