Posted by Michael Parsons on November 12, 2015 in Commentary, Movie Reviews, New on DVD and Blu-Ray / No Comments

Perhaps the most wildly diverse portfolio ever to emerge from Hollywood belongs to Dalton Trumbo, the Oscar-winning screenwriter who also cranked out more B-movie scripts than Ed Wood. But the paradox that is his résumé — much of which is invisible (even on IMDb) — remains a symbol of  something far greater than anything the nation’s most glamorous industry could ever have put to celluloid.

Dubbed one of the “Hollywood Ten”, which consisted of writers and directors who were blacklisted from Tinseltown for refusing to submit to the House Un-American Activities Committee on suspected communist dealings during the post WWII “Red Menace” paranoia, the prolific writer became a martyr for free speech when a contempt charge bought him a year behind bars in 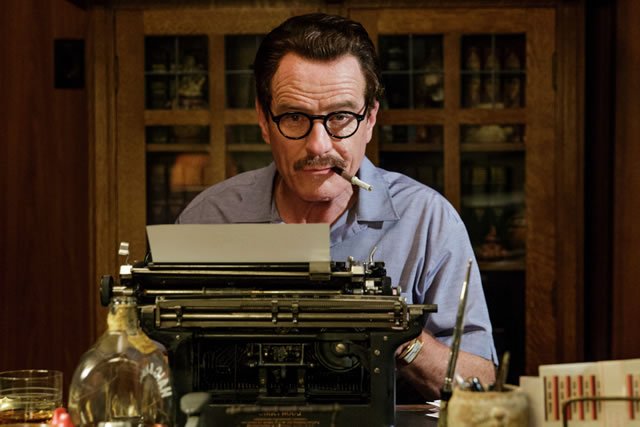 1947. This was followed by over a decade of covert employment in the industry, during which time he secretly amassed Academy Awards for 1953’s  “Roman Holiday” and 1956’s “The Brave One”, and eked out a living on drive-in caliber potboilers for $1,200 a pop. Even back then, that was quite a bargain for the once highest-paid writer in the biz.

Jay Roach’s biopic “Trumbo”, adapted by John McNamara from the book Dalton Trumbo by Bruce Cook, follows the improbable career arc of one of Hollywood’s most unusual figureheads. The alternately cranky and amiable character is played by Bryan Cranston, who knows how to twirl a mustache without looking like something out of the funny pages. Severing himself completely from his most iconic role in “Breaking Bad” (this time he is not the danger, but someone fighting a dangerous trend), the actor devours every quirky little bit of his role, from his stint behind bars where he meets the perspective-enhancing Virgil (Adewale Akinnouye-Agbaje), to confrontations with his biggest industry detractors, columnist Hedda Hopper (Helen Mirren) and John Wayne (David James Elliott). Conveying a high level of cerebral activity every second he’s on-screen (when he’s not speaking, it’s the slight arch of an eyebrow or grimace to indicate that the wheels are turning), Cranston creates a larger-than-life character without compromising his authenticity as a human being. In other words, this isn’t Depp in “Fear and Loathing in Las Vegas”.

A husband and father, an activist, and a complete madman, Cranston’s Trumbo is a force to be reckoned with, equally comical and compelling in his resolve to fight injustice.  “He’s a bold, broad stroke kind of guy,” Cranston described of his character when we caught up with him at the Newseum’s Washington, DC premiere. “He’s a brash contrarian, he’ll take on a confrontation. He won’t back down from a fight. He’s very flamboyant and dramatic and theatrical. Probably the thing I was most concerned about was to not make him into a caricature.”

A tricky balance indeed. At very first sight, the character looks like he would sooner break into some sort of Vaudevillian schtick than subvert the government with his intellect. The film spends a lot of time observing the writer maniacally pounding away at his vintage IBM typewriter in the bathtub, a ritual that would have rendered him a perpetual prune based on his colossal yield. Hired for quantity over quality by schlock producer Frank King (John Goodman playing a likable, vaguely mobster type), Trumbo burns through about 30 pages and 100 cigarettes a day like some sort of mad scientist tasked with filling every midnight movie slot for the next thirty years.  The demanding hours spawn an underground enterprise in the Trumbo house, where the kids moonlight as his courier service, an arrangement that, in particular, strains his relationship with his eldest daughter Nikola (Elle Fanning), while his wife and anchor Cleo (Diane Lane) miraculously holds it all together. 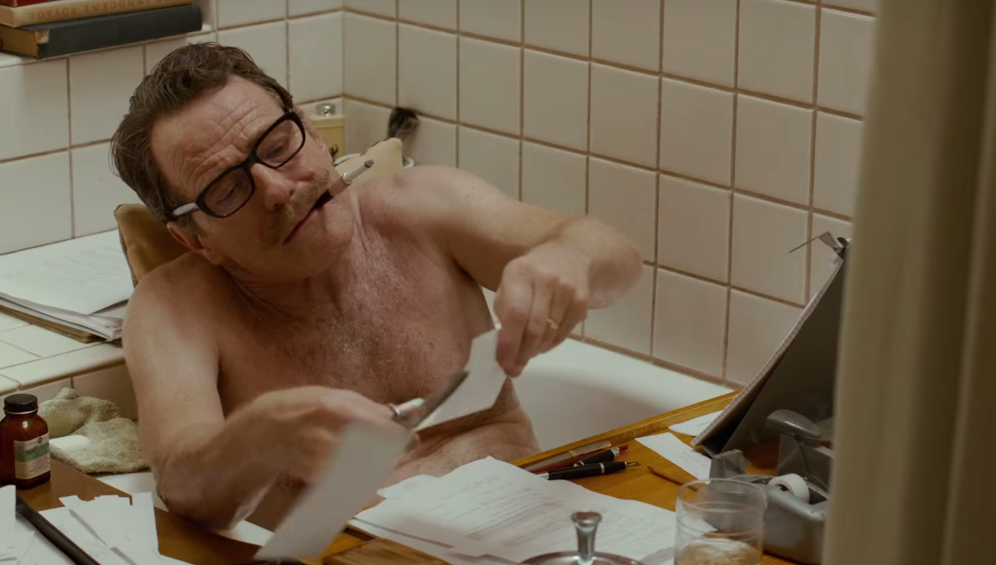 As he did with 2012’s Palin/McCain bio “Game Change”, director Jay Roach deviates somewhat from the more conventional comedies he’s known for like “Meet the Parents” and “Dinner for Schmucks” to delve into the realm of politics, and though the film maintains an air of humor throughout, “Trumbo” ultimately lands as a serious biopic. “Fear was used as a weapon to shrink these guys, diminish them and cause them to lose their careers,” Roach told us. “But they wrote their way out of it. Trumbo wrote his way out of jail, literally and figuratively. He was such an amazing writer, and he wrote some of my favorite films.”

After much suspicion that he was writing under an alias, Dalton Trumbo officially re-emerged on the scene when receiving proper credits for two of 1960’s most highly regarded films: Stanley Kubrick’s “Spartacus” and Otto Preminger’s “Exodus”, when the directors openly hired him. Christian Berkel is excellent as Preminger, who lingers like a specter in Trumbo’s home office while he works; spot-on casting extends to Dean O’Gorman as Kirk Douglas, who, as the star of “Spartacus”, played a major role in dissolving the blacklist. Mirren plays an elegantly nasty Hedda Hopper, and David James Elliott hits the right notes as the imposing John Wayne, though he gives The Duke a substantial upgrade in the looks department. But the highlight is perpetually somber yet lovable stand-up comic/actor Louis C.K. as composite character Arlen Hird, Trumbo’s commiserator and sounding board.

“Any time civil liberties are in jeopardy of being taken away,” Cranston explained, “in this case by threat of imprisonment, citizens need to stand up and fight back. It’s not as if you just discard National Security. That is by far the most important responsibility of any government. But the First Amendment needs to be a vital part of that conversation before policy is determined”.

Posted in Commentary, Movie Reviews, New on DVD and Blu-Ray