Posted by Michael Parsons on October 8, 2015 in Movie Reviews / No Comments

Good fortune and co-dependence blur together in the gambling flick “Mississippi Grind”, a laid back buddy/road trip drama from writers/directors Anna Boden and Ryan Fleck (“Half Nelson”) that is more about the players than the game. It’s like “Rounders” with a bigger heart.

“The journey is the destination”: That’s the credo of good-natured Curtis (Ryan Reynolds), a guy who says he comes from “everywhere”. One night, as if riding in on the very rainbow that would later become the topic of drunken discussion, he lands at a poker table in Iowa where he meets Gerry (Ben Mendelsohn), a fellow desperately in need of a cosmic intervention. Gerry owes money to everyone, and Curtis quickly proves to be his good luck charm. 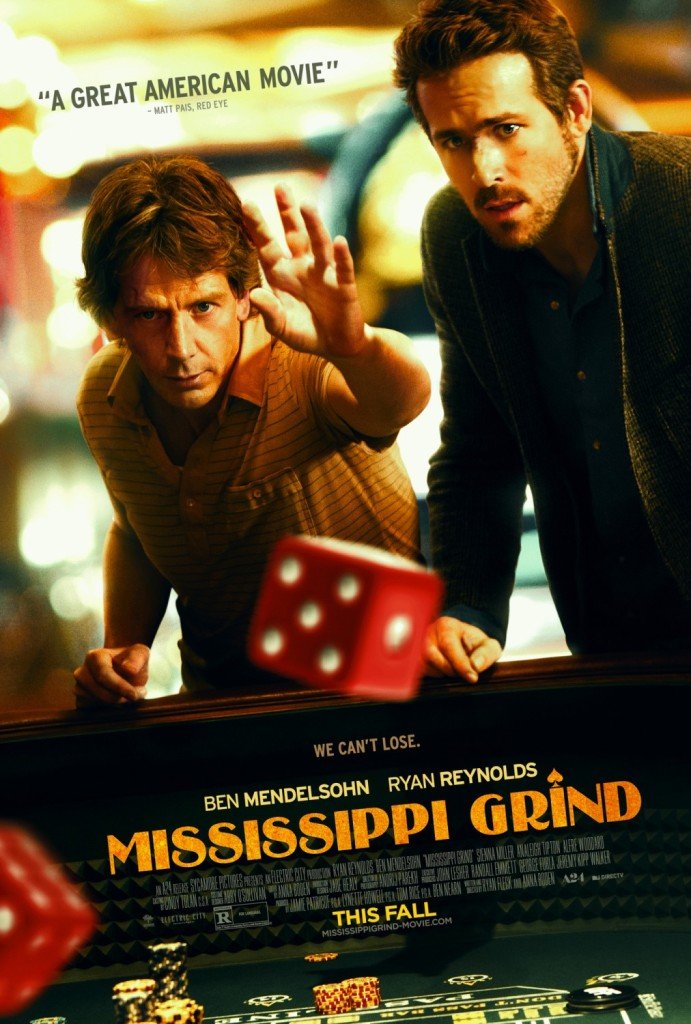 Indeed, larger forces seem to be at play here. As if they’d met in a previous life, the two are surely fated for some sort of catharsis. But as “Mississippi Grind” has in store, these guys don’t typically learn from their mistakes.

When we’re introduced to the charismatic Curtis, he’s spinning a yarn about a degenerate gambling addict who, as it turns out, is a lot like Gerry. A fast friendship develops after a fruitful night at the Hold ‘Em table, and the two decide to capitalize on their serendipitous encounter by heading to New Orleans, hitting every gambling venue along the way. Curtis appears to have a genuine interest in the well-being of his bedraggled new BFF, enthusiastically detouring when Gerry suddenly wants to make things right with his estranged daughter. His guardian angel, perhaps? Enabler is more like it.

Countless snifters of top shelf whisky and a shared belief that every little thing is a “sign” lead to a destructive on-again off-again partnership that only perpetuates their turbulent lives. Gerry takes a shot at playing it straight, half-heartedly trying to squeak out a living as a real estate agent, all the while keeping his debts at bay (Alfre Woodard appears briefly as a bookie dressed for a PTA meeting). Curtis, despite his outward appearance, has major self-esteem issues that manifest in provoked beatings and a tortured love life. A pit stop in St. Louis reveals that he has strong feelings for an escort (Sienna Miller), with whom he envisions some sort of fairy tale romance that’s never going to happen, because whenever things get challenging, it’s his cue to move on (something he calls “Machu Picchu time”). Later in the film, when the duo have a bad run at the horse track, Curtis decides it’s time to call it a day: “It had to end this way, Gerry”, as if his masochistic tendencies have unfurled in one giant self-fulfilling prophecy.

The Boden/Fleck team have written a couple of wonderfully flawed characters, and it’s great to see Reynolds (who I love even in bad films) in such an emotionally complex role. Mendelsohn, who rarely disappoints,  miraculously  makes us feel sorry for Gerry even when he resorts to stealing money from his ex-wife’s (Yvonne Landry) sock drawer. Though not as pathetic on the surface, Curtis is on a similar path, his insecurities buried beneath his charm and good looks; the character is a composite of some of his best roles, dialing back his typical sarcasm just enough for us to glimpse into his damaged conscience.