Posted by Michael Parsons on October 6, 2015 in Movie Reviews / No Comments

There’s something magical about Lily Tomlin, whether she’s playing adorably dizzy in the Netflix series “Grace and Frankie” or callous and cynical (but somehow still adorable) in writer/director Paul Weitz’s “Grandma”, a comedy of — well, past errors.

When  teenager Sage (Julia Garner) shows up at the door of her bohemian grandmother Elle (Tomlin) needing $600 for an abortion that’s she’s scheduled for that afternoon, the once renowned septuagenarian poet doesn’t have two nickels to rub together, having recently crafted a wind chime out of her credit cards. What Elle does possess, however, is a wealth of life experience, a sharp tongue, and an attitude that leaves little room or tolerance for B.S., like she demonstrates when asked to exit a coffee shop for discussing the termination of the pregnancy openly with her granddaughter (John Cho cameos as the store manager).

In what most people would probably consider an unconventional relationship, Elle and Sage trek across town to piece together the funds, all the while avoiding the one person that could give it to them: Sage’s mom/Elle’s daughter (Marcia Gay Harden), an over-caffeinated, hard-nosed, judgmental executive type who works from a treadmill desk and still holds a grudge over Elle’s questionable parenting. 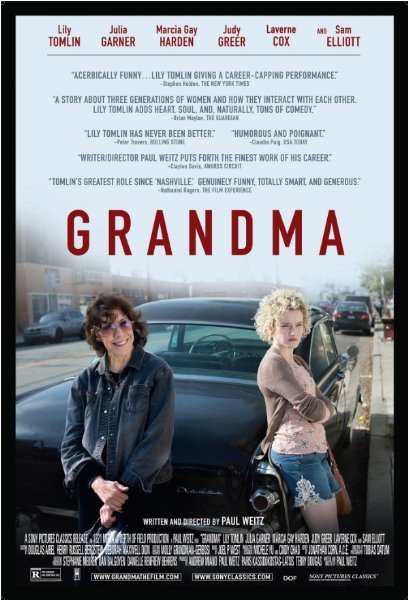 So it’s no wonder when Elle first turns to an old friend (Sam Elliott) for the dough, even when it becomes increasingly evident that he, too, remains disgruntled over something from the past. Their brief but heated interaction is a highlight of the film.

Elle’s wake of emotional devastation proves to be ever-broadening, most recently with younger ex-girlfriend Olivia (Judy Greer), a genuine and sensitive thirty-something with whom grandma parts ways in the film’s opening scene. With seemingly little emotion, Elle dismisses their four-month relationship as a mere flicker in comparison to the 38 years she spent with her deceased life’s love and surrogate family matriarch, Violet.

Tomlin’s on-screen presence is so strong that co-star/sidekick Garner spends much of her time simply reacting to hilariously profane bits of wisdom and one-liners (though Sage is afforded a clever quip or two of her own), while the duo attempt to collect the money any way that they can. Elle offends everyone they encounter along the way, with the exception of a tattoo artist friend (played by “Orange is the New Black” star Laverne Cox) who is grateful to her for a past kindness.

But as we peel back layers of the onion in the quirky little comedy-drama, we could begin to perceive Elle’s behavior as a refreshing transparency, a quality that society could use a lot more of, usually because the truth is often hard and unpleasant.

Like Tomlin’s character, “Grandma” puts on a rough exterior, but it’s ultimately a touching and well-intentioned movie, even though it feels like it still has more to say by the time the credits roll after its fleeting 80 minutes. Weitz (“American Pie”, “About A Boy”) has a way of revealing the good in  his characters without becoming sappy or overly sentimental. The humor  is sardonic but rarely mean-spirited, outrageous but never silly. You should see “Grandma” for every unapologetic line of dialogue uttered by the great Tomlin, and for one instance in which she dispenses a much-deserved  beat down to Sage’s deadbeat boyfriend.